Calle Ocho Festival celebrates Latin culture and music every March for one week.

It is the grand finale of Carnival Miami. The final event on Sunday is billed as the largest street festival or block party in the world.

More than one million visitors come to the festival and the block party, which is the culminating event of Carnival Miami.

For one action filled day, almost 30 blocks of the Little Havana neighborhood is blocked off to traffic and opened to people.

The streets are jammed with Latin music, performers and foods from all over the world and the people who love them. 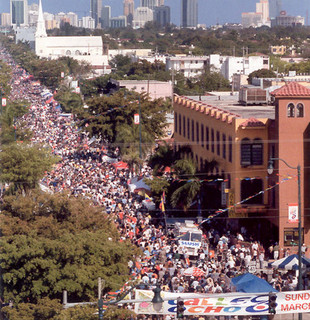 The festival is family friendly, with a full 4 block area designed for children. They will see their favorite sports teams and enjoy watching magicians and clowns perform their acts.

The entire neighborhood is filled with wandering street musicians, dancers and other performers. There are also hundreds of food booths lining the streets that serve just about every Latin dish you can imagine.

There are many stages all along Calle Ocho (SW 8th St) with some of the world's most famous Latin entertainers performing. You will hear merenque, tango, salsa, reggae and other Caribbean and South American musical sounds.

The Calle Ocho festival is in the Guinness World Record book for the longest conga line in the world: 119,986 people.

Kings or Queens of the festival in the past have included Gloria Estefan, Desi Arnaz, Willy Chirino, Arturo Sandoval and many other recording and performing stars.

There are many other events that take place during the carnival period leading up to the block party.  One of the best attended events is the Baptist Health Domino Tournament which takes a couple of days.

Domino competition is a tradition among the residents of Little Havana.  The games are played in Domino Park at the corner of SW 8th Street and SE 15th Avenue.  The formal name of this park is "Maximo Gomez Park". It is one of the principal gathering spots in Little Havana.

Maximo Gomez was a Cuban hero who fought in the revolution against the Spanish that resulted in Cuban independence.

During the days and early evenings the park is jammed with old men and other neighborhood people playing dominoes. 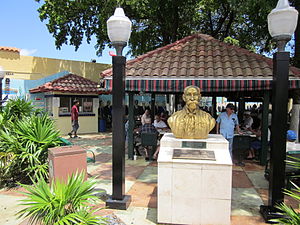 Make sure you make your room reservations well in advance because this is a big party that attracts a lot of people from out of town.