St. Petersburg Florida is called St Pete by most natives of the Tampa Bay area. The population is about 262,167.

St Pete is within the Tampa Bay Metropolitan Statistical area of about 2.9 million residents.  It is the largest city in Pinellas County. 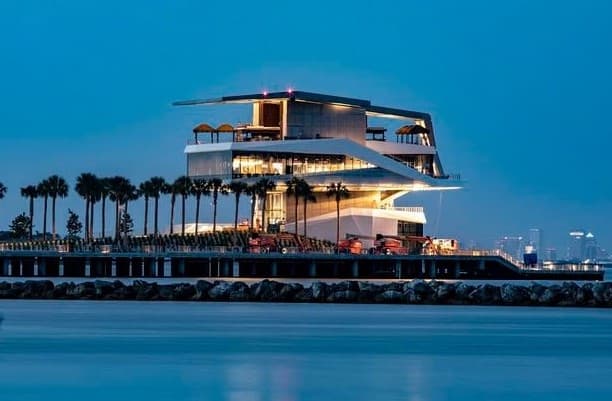 St. Petersburg is on the western shore of Tampa Bay.  It's larger and older neighbor, Tampa, is on the eastern shore.

The city had two major founders: John C. Williams of Detroit, who bought the land that is now St Pete in 1876, and Peter Demens, a Russian who was instrumental in bringing the terminus of the railroad there in 1888. 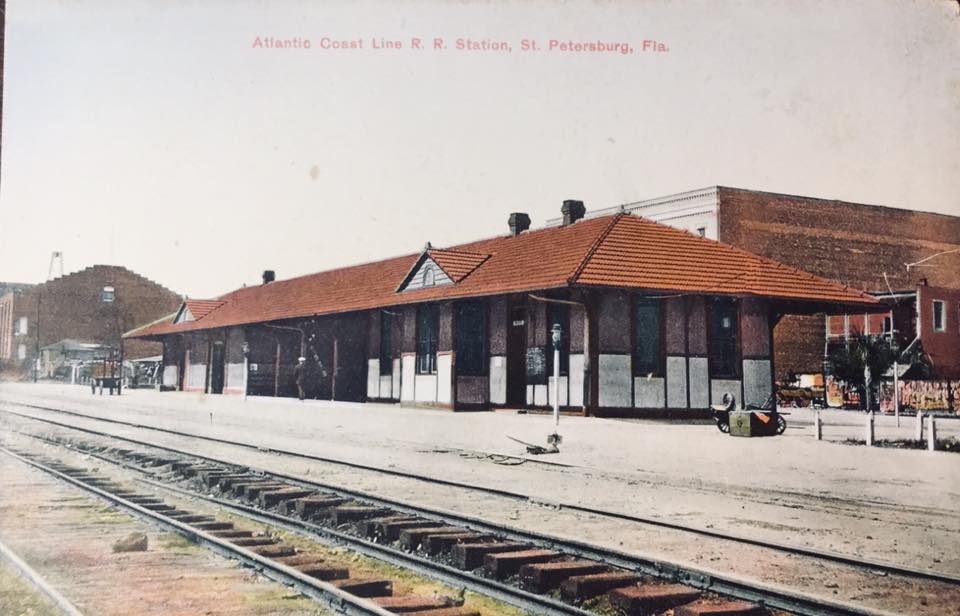 St Petersburg Florida was incorporated in 1892 with a population of only about 300 people.

Demens named it after his former hometown of St Petersburg Russia.

St Pete is located on a large peninsula between Tampa Bay and the Gulf of Mexico. The peninsula is surrounded by some of the prettiest waters in Florida. 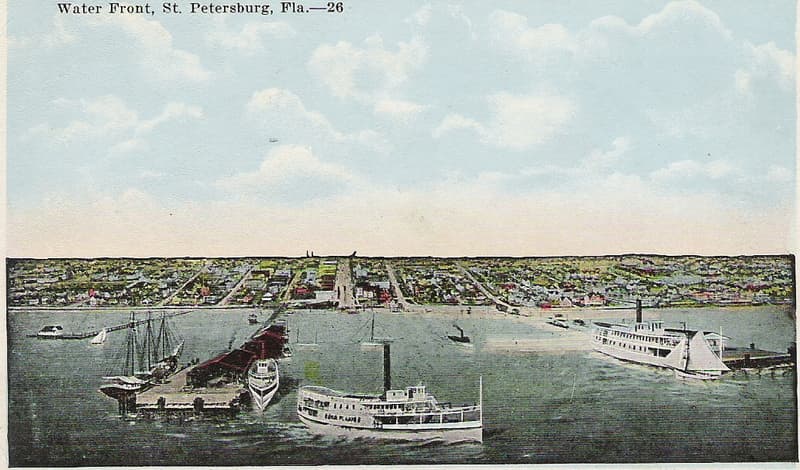 This peninsular location somewhat isolated St Pete from the rest of Florida in its early days.

In the early 1900's a channel was dredged out into Tampa Bay and St Petersburg Florida became a significant port city.

The downtown waterfront became the focal point of the city.  That is still true today. 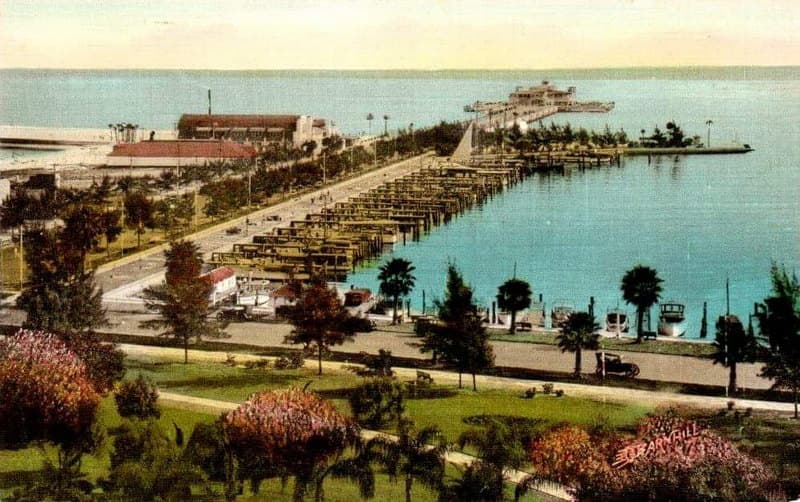 It was still a long way from anywhere by land, however. It was a winding 43 mile trip from St Pete to Tampa through Oldsmar on the north side of the bay.

The first commercial airline service was started in 1914 with a seaplane. It was known as the St Petersburg–Tampa Airboat Line. The first pilot was Tony Jannus.

Jannus Landing, a local music and entertainment venue on Central Avenue in downtown St Pete is named in his honor.

Promoter George Gandy built the first bridge over Tampa Bay in 1924. At last, St Petersburg Florida was a convenient trip to and from Tampa.

The other bridge that connects St Pete to Tampa is the Howard Frankland Bridge that carries I-275 from North St Pete to west Tampa.

In the years after World War Two, St Pete became a mecca for retired people.  They flocked to the sunshine and lived in the many residential hotels in the downtown area. 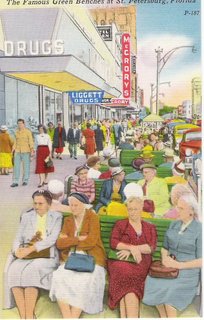 When I first moved to Florida in 1960, downtown St. Petersburg was widely derided around the state as "God's Waiting Room."

The city streets were lined with green park benches upon which sat thousands of elderly people socializing and watching the world go by.

The symbol of St Pete became old people sitting on the many green benches that dotted the sidewalks of the city.

Another interesting feature of St. Petersburg was the sailing ship that used to be near the old pier.

The Bounty II, a replica of HMS Bounty used in the 1962 MGM movie starring Marlon Brando was permanently docked near the old inverted Pyramid Pier for many years until the ship was sold in 1986. 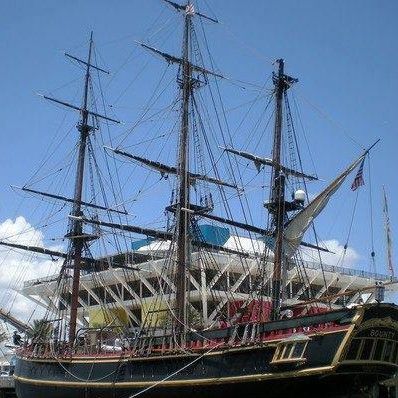 It used to come to St Pete for the winter, but no more:  it was lost in a storm off North Carolina during Hurricane Sandy in 2012.

There is a significant marine industry in town. Unlike the rest of Florida, a few of the boatyards have not been converted to condominiums or marinas.

St Petersburg Florida has long been nicknamed The Sunshine City, and was a retirement location for northerners.

To paraphrase a popular car commercial of some years ago, this ain't your father's St Pete.

The old apartment and condo buildings of "God's Waiting Room" of 50 years ago have been either torn down or renovated. Old homes have been purchased and restored. 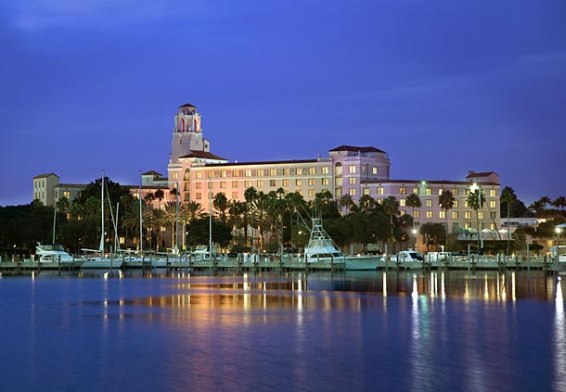 The entire downtown area is vibrant and alive, night and day. My favorite place to stay downtown is the Renaissance Vinoy Hotel, a beautifully restored structure on the National Register of Historic Places.

These include a children's museum, a museum of fine arts, a history museum, a Holocaust Museum, and the Salvador Dalí Museum.

The Dali Museum houses the largest collection of original Dalí's outside of Europe. There are links to some of these places further down this page.

There are dozens of smaller art galleries, small entertainment clubs, theaters, and a massive waterfront park system that showcases the marinas.

The legendary St. Petersburg Pier, a popular Florida tourist attraction, is once again the centerpiece of the downtown district. 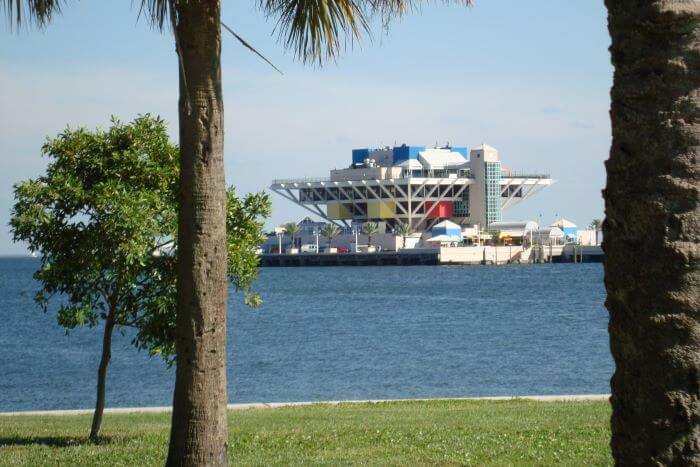 The iconic old inverted pyramid pier was been demolished and the new St. Pete pier is a modern version that is now open for business.

The BayWalk shopping complex is also downtown, with an IMAX Muvico 20 screen movie theater, as well as many chain restaurants and retail shops. 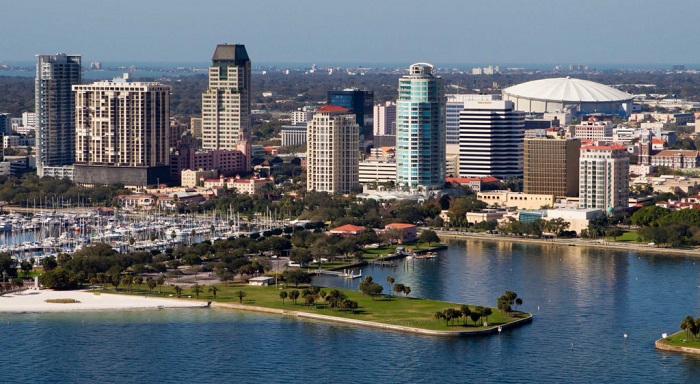 St. Petersburg parks are well landscaped and nicely distributed throughout the large city.

Every Saturday morning, from October to May, the downtown area hosts a farmers market in the parking area of Al Lang Field (now also known as Progress Energy Park). 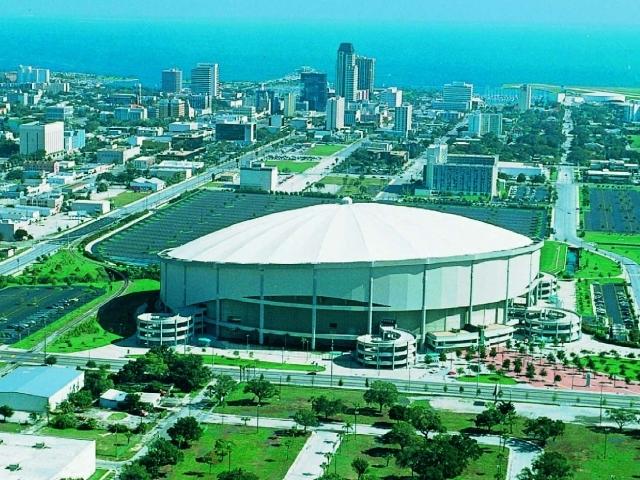 St Petersburg Florida is just a short drive from the Gulf beaches of St. Pete Beach, Pass-A-Grille and others. Fort Desoto State Park has a beach that Dr. Beach has ranked number one in the USA. 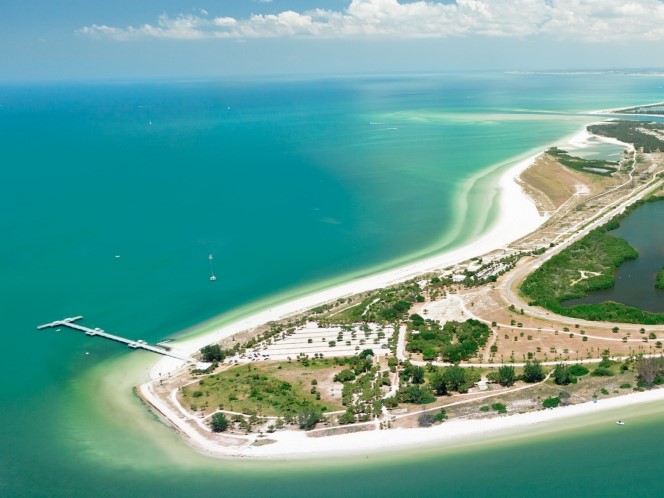 South of St Pete, the peninsula is connected to the south side of Tampa Bay near Palmetto and Bradenton by the modern Sunshine Skyway Bridge that carries I-275. The view from this bridge is one of the most magnificent in Florida. 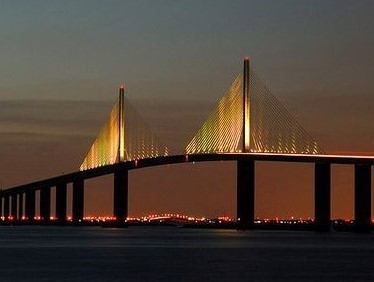 To me it represents the epitome of a luxury hotel.

The resort includes a private marina, 18-hole golf course and 12-court tennis complex. The large hotel has been beautifully restored to its 1920's elegance.

It is a classic example of Mediterranean Revival architecture, and it is on the National Register of Historic Places. It is within easy walking distance of all of downtown St. Pete's attractions.

It is a well maintained property with a knowledgeable and friendly staff.

The Chattaway is an Old Florida restaurant in St. Petersburg, south of downtown and in a neighborhood not at all trendy. 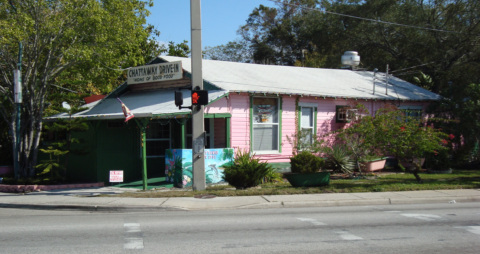 It has been operating as a business in one form or another for more than 90 years at this same location on the southeast corner of 4th Street South and 22nd Avenue South.

In fact you may drive by it for years and never think of going inside. That would be your loss. A great visual and dining experience is yours once you park your car and walk into this place.

Among all the great local restaurants, I enjoy this one for its laid back atmosphere.  It is one of the best places in the city to get a good hamburger.

Lots of interesting things to do within 100 miles or so of St Petersburg.

ALL ABOUT ST. PETERSBURG, FLORIDA

ST. PETERSBURG THINGS TO DO