Hernando Beach, Florida is on the Gulf of Mexico about 10 miles west of the center of Spring Hill.  This area is in Hernando County about 50 miles north of Tampa Bay. 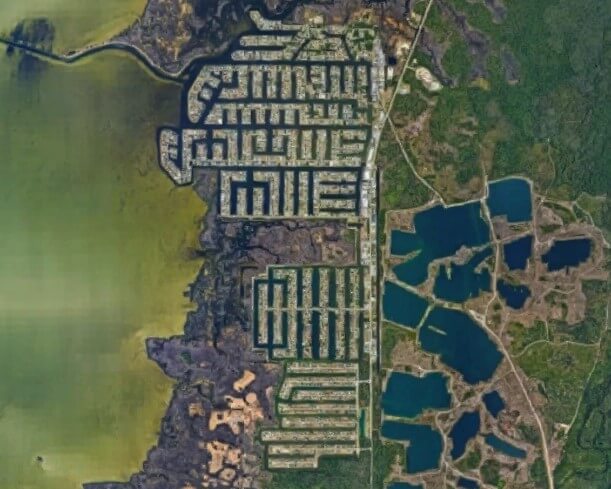 The main highway serving this area of coastal Florida is US-19.

For untold thousands of years, the area that is now Hernando Beach was all wetlands typical of much of Gulf Coast Florida north of Tarpon Springs.

Most of the land west of US-19 is wetland all along this stretch of Florida coast. 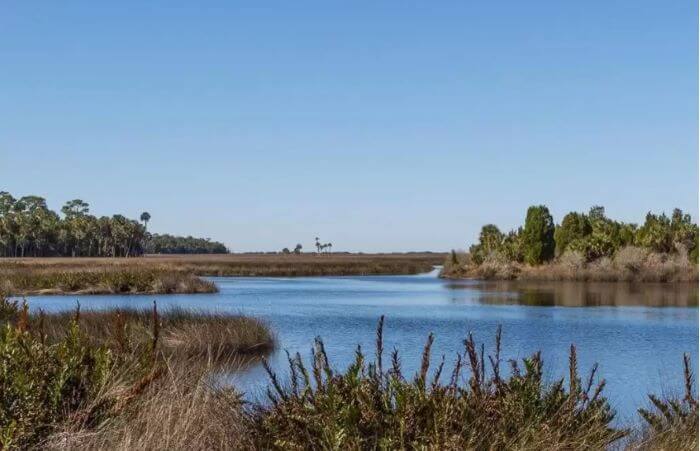 Charlie Sasser was a graduate of the University of Florida who became a lawyer and land developer.  He passed away in nearby Brooksville in 2010.

In the late 1950s and early 1960s he began to dredge and fill the wetlands and created what is now known as the North Section of Hernando Beach.

The canals in this section lead directly to the Gulf of Mexico and are the deepest and widest in Hernando Beach.

If Mr. Sasser had started this project just a few years later, environmental regulations and restrictions would probably have made it impossible.

These restrictions did in fact have a large impact on the later development of the Center and South sections of Hernando Beach that Mr. Sasser began in the 1960s and early 1970s.

The main street in the North Section of Hernando Beach is Calienta Street.  It extends from the north to the south where it meets Shoal Line Boulevard.

Shoal Line Boulevard (County Road 597) runs in a north-south direction along the eastern edge of the community all the way  south to Osowaw Boulevard. 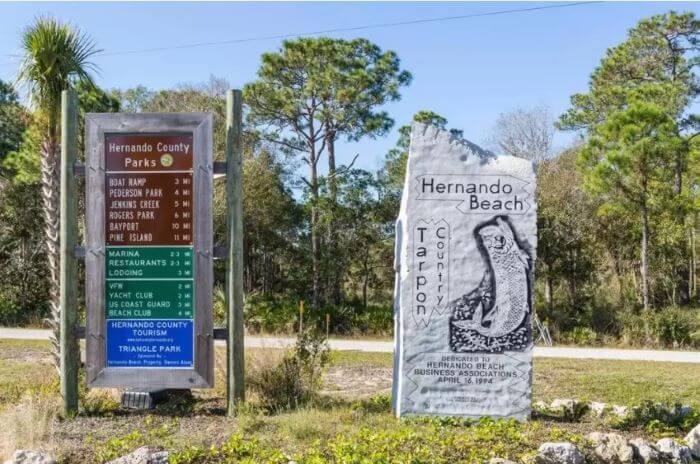 When you look east from this road you will see abandoned quarry pits that were once a thriving local lime rock mining operation.

A developer in the 1990s was on the verge of turning these water bodies into into a residential community. 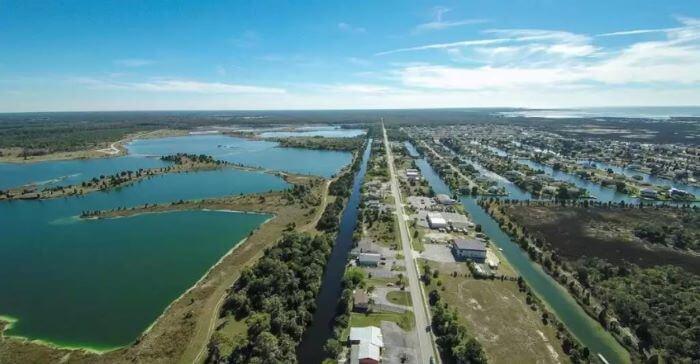 There was a lot of opposition to the project, and government agencies ended up buying it. The old quarries are now part of the Weeki Wachee Preserve.

This 11,206 acre nature spot has walking and cycling trails, and many places for launching kayaks or fishing.

South of this section is all wetlands for about a quarter mile to the northern edge of the Central Section. 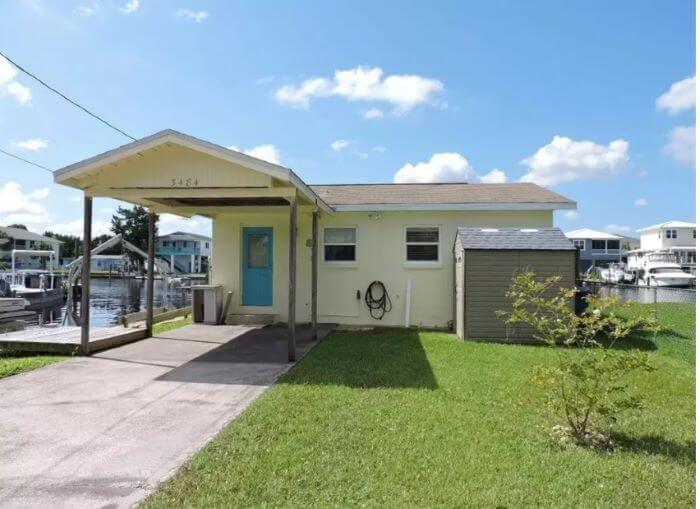 Most of the dredged up fill in Hernando Beach is only 3 feet above sea level.  Some of the earliest houses were built on grade and subject to flooding during high water storm events.

Common sense and new building codes have resulted in most newer homes being built with their first living floor elevated well above grade.

The ground floor is usually used for parking and storage, with walls designed to break away in the event of a storm surge coming in from the Gulf. 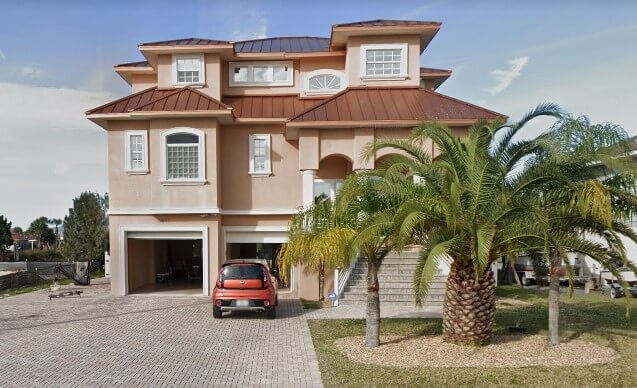 The Central Section is all of the streets that branch off north and south from Hermosa Boulevard, the main access from County Road 597. 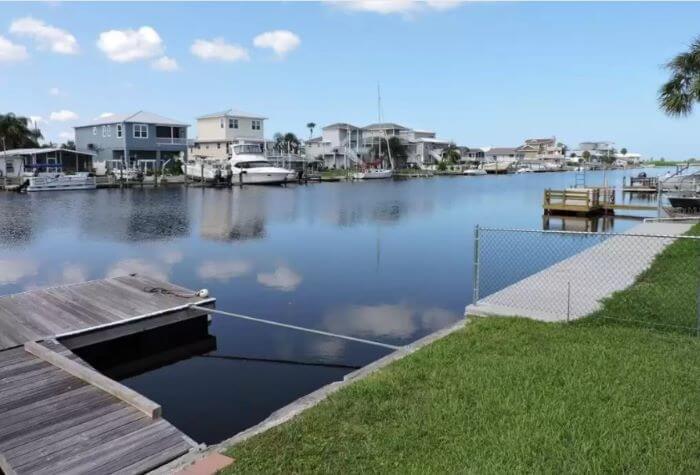 The South Section is reached from Shoal Line Boulevard by Bluefish Drive or Jewfish Drive.

The Central and South residential sections are separated from the North Section by a natural wetland area about 1200 feet wide.

It remains in much the same condition as all of Hernando Beach was before development. 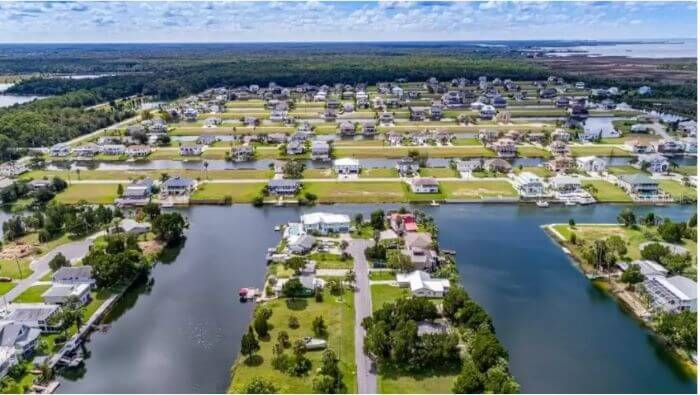 Continuity to the community comes from the narrow strips of land along both sides of Calienta Street and Shoal Line Boulevard.

This is the area that contains the Hernando Beach business sector.

Both the Central and South sections have indirect access to the Gulf of Mexico through the Community Boat Lift.

Direct canal access to the Gulf of Mexico from the Central and South sections is blocked by an earthen berm that surrounds the entire area.

This affects about half of the homeowners in Hernando Beach.

The berm was required as the result of a lawsuit against the developer that was won by the U.S. Army Corps of Engineers and the Florida Department of Environmental Protection. 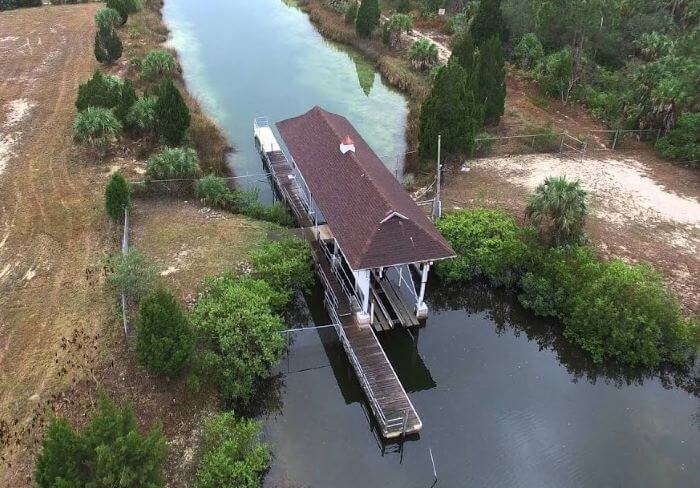 This seems to be one of those cases where the dredge and fill development was first approved, then later overturned by the government.

As a result of the berm, the canals in the Center and South sections are brackish with a much lower salinity level than the ones in the north section that are connected directly to the Gulf.

The purpose of the berm was to prevent salt water intrusion into the canals from the Gulf of Mexico.

Homeowners with boats in the Center and South sections have to use the manually operated boat lift to get past the berm from their canal system into the North section's system and on out to the Gulf.

The beautiful shallow waters of the Gulf of Mexico, along with the miles of canals, have made Hernando Beach a boater's community.

The clean rippled sand bars are plainly visible through the clear waters.  They make excellent scalloping sites during scalloping season and scuba adventuring any time.

Most Hernando Beach businesses are located along Calienta Street and Shoal Line Boulevard.

As you would expect of a community in such a watery location, boats and seafood are important businesses.

There are several places to rent boats and kayaks, and there are four full service marinas in Hernando Beach with wet and dry boat storage facilities.

The long north-south canal on the west side of Calienta Street is lined with boat slips full of both power and sail boats. There are also commerical fishing boats including shrimpers.

There are several laid back restaurants in the district, including some you can bring your boat to.  The restaurants have inside and outside dining areas. 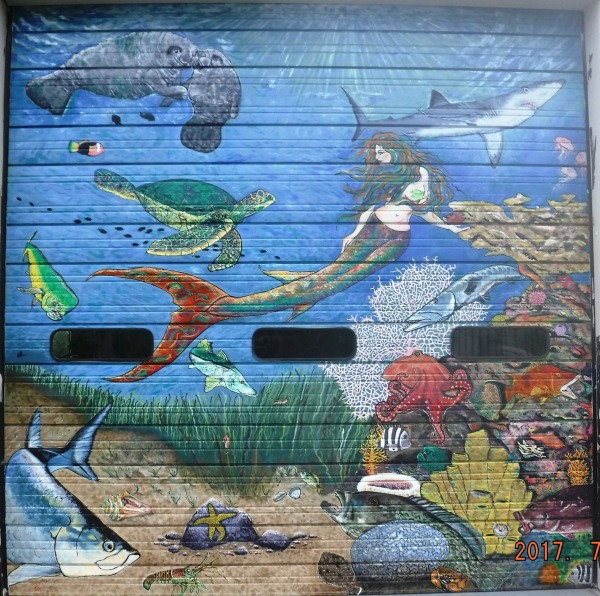 Over the years I've noticed some murals popping up around Hernando Beach.  The one above is on a door of the fire department located on Shoal Line Boulevard.

A popular hangout on Shoal Line Boulevard is the Hernando Beach Yacht Club, a members only club that sponsors a lot of sailing events, fishing trips, and dinners.

There is also a dinner cruise boat in Hernando Beach, the Marina Rose.  It's fully enclosed and is a great way for up to 18 passengers to see the area.

You can also buy fresh seafood at a couple of fish markets at town and in nearby communities. 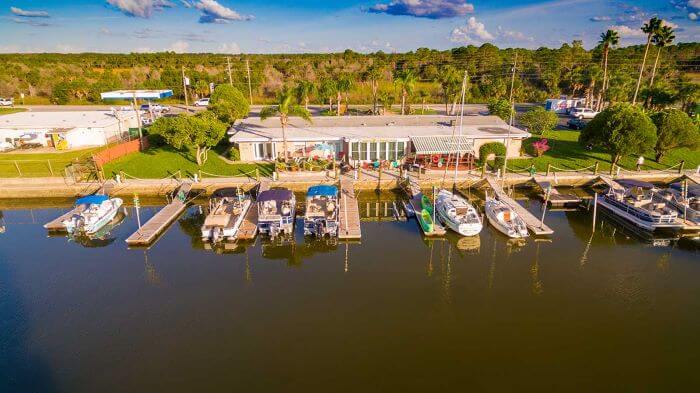 There are many places to stay in motels around the nearby Spring Hill area, and there is at least one that is in the community itself, the Hernando Beach Motel.

You can also check out Airbnb and VRBO because many Hernando Beach owners rent out their places on a short term basis.

Almost everyone I know who lives in Hernando Beach loves the place.  They are united by a love of the water and a common understanding they better leave town if a hurricane approaches. 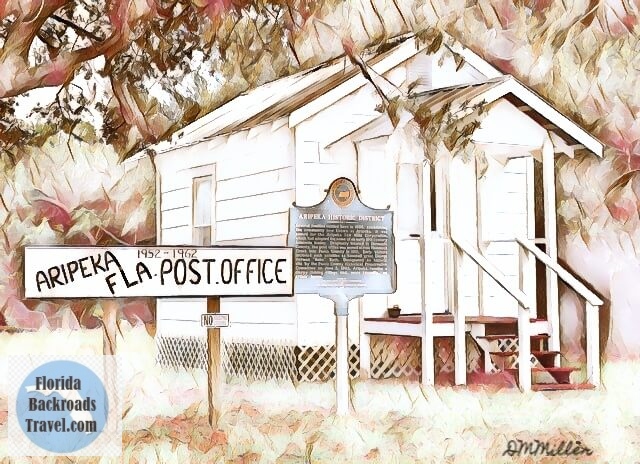 Waterfront real estate in the United States is expensive and Hernando Beach is no exception.  It is one of the few places in this part of Florida where you can have a home on a deep water canal.

Another advantage of this town is that the surrounding salt water marshes limit future growth in the Hernando Beach area.

The small old fishing village of Aripeka is on Osowaw Boulevard only a mile or so south of Hernando Beach.  It was a favorite fishing hangout of baseball Babe Ruth back in the day.

ALL ABOUT HERNANDO BEACH FLORIDA

Some places to stay and eat while visiting Hernando Beach are in nearby Spring Hill, Brooksville, and Weeki Wachee Springs.

HERNANDO BEACH THINGS TO DO