Jupiter, Florida things to do, lodging, dining,  & real estate at end of article.

Jupiter, Florida is one of the most beautiful towns on Florida's east coast.  It has a population of about 62,000 and is situated on an inlet to the Atlantic Ocean. 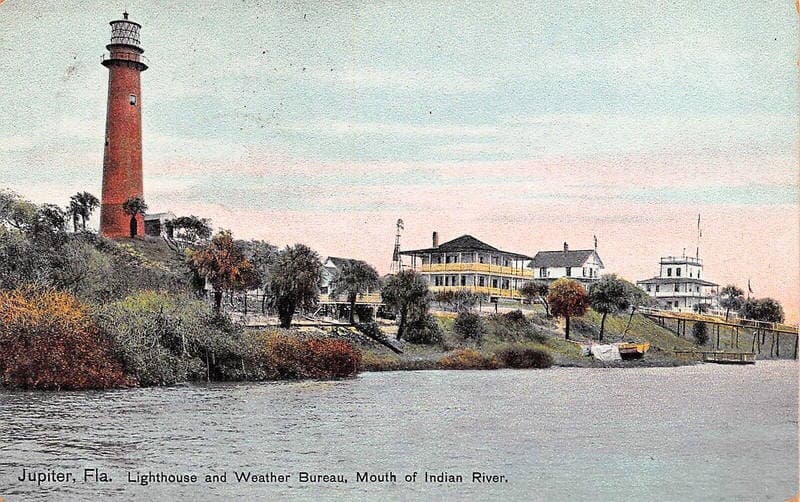 Most people who live in Jupiter would rather not live anyplace else.  It's usually voted by travel authorities as one of the best beach towns in Florida.

It is the northernmost town in Palm Beach County and many travelers think of Jupiter as the line of demarcation between heavily urbanized south Florida and the quieter places to the north.

Those Floridians have been known to say "I'll live anywhere in Florida as long as it's north of Jupiter Inlet. 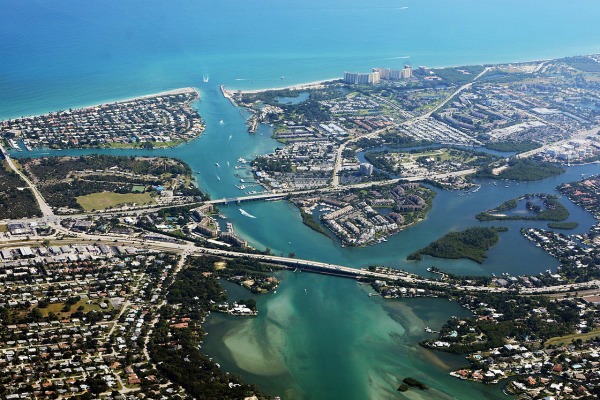 The area was first settled by the Hobe tribe of Native Americans whose village was at the mouth of the Loxahatchee River.  This river flows into the ocean at Jupiter Inlet.

The tribes's name is memorialized in Hobe Sound, the brackish lagoon that separates the barrier island from the mainland.

Somewhere along the line of history somebody thought the word "Hobe" was spelled "Jobe" and it became further corrupted as "Jove".

Then someone else thought that Jove was the Latin name for Jupiter, one of the ancient gods.

Jupiter was known by the name of Zeus in ancient Greece, but at least that error wasn't made and early settlers stuck with the name Jupiter.

The name is appropriate, because the ancient Romans believed Jupiter to be the god of weather, light, and the sky.  The weather in Jupiter is superb.

Just to cap off this story, a nearby town south of the inlet was named Juno after Jupiter's consort.

Jupiter, Juno, and Mars were connected by what became known as Florida's Celestial Railroad. 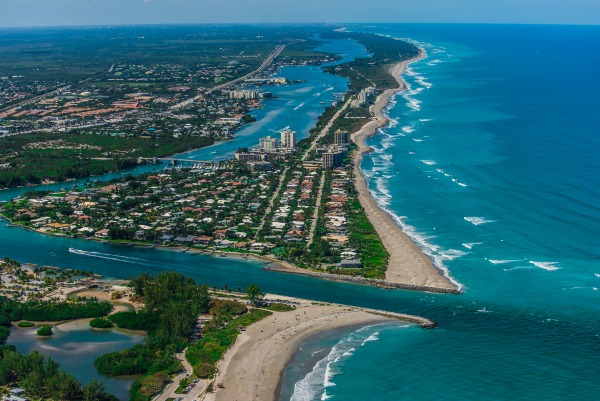 One of the most memorable things along this coast is the Jupiter Inlet Lighthouse.  It was built in 1860 and is made of brick.

The lighthouse and adjacent museum are open to the public.  The view of Jupiter Inlet and Jupiter Island is magnificent.

Some of the wealthiest families in the United States live on Jupiter Island.  This barrier island stretches north from Jupiter inlet.

A road along the ocean offers some views of the ocean, but most homesites are heavily landscaped and extremely private. 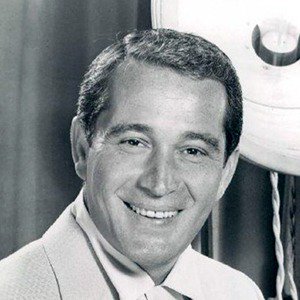 The community on the north side of the inlet is known as Jupiter Inlet Colony.  For many years one of it's best known and best loved residents was the singer Perry Como.

He regularly attended church in the nearby town of Tequesta, and died in 2001 at the age of 87.

The mainland around Jupiter is also beautiful, with many upscale golfing and boating communities.  There are many fine shops and restaurants to keep you busy for a long time. 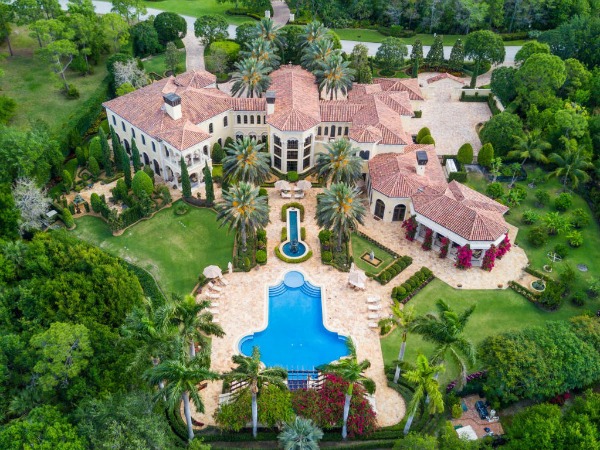 The Jupiter Inlet Lighthouse and Museum has been open to the public since 1972. 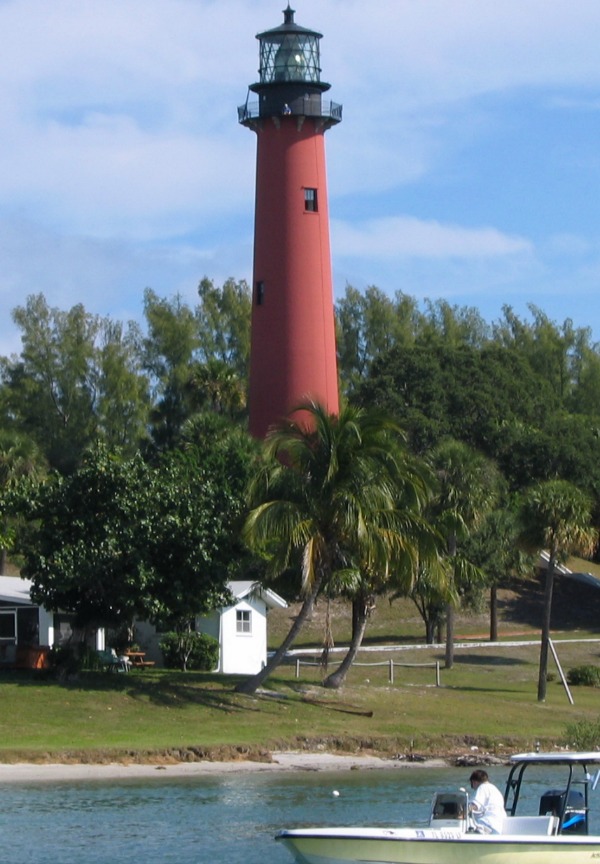 The tower was first lit in 1860 and has a wonderful view of Jupiter Inlet, the Intracoastal Waterway and the Atlantic Ocean.

The station is credited with providing information that led to the sinking of more than 60 German submarines that had been torpedoing Allied ships along the Atlantic coast in 1943.

Tours of the lighthouse grounds and museum, including tower climbs, are available to the public.

The lighthouse is on a large property that also includes nature walks and various scenic events such as lighthouse sunset and moonrise tours.

The lighthouse property also serves as a park and community center for the area and has a busy event schedule.

The museum is also open to the public and features many exhibits of Native American and early pioneer culture.

Access to the lighthouse is by paid guided tour only and tickets are purchased in the museum.

The lighthouse and museum are open to the public on the following schedule:

Admission is free for children 5 and under and for active U.S. Military and their families (with I.D.)

More information about the lighthouse and its various events is at Jupiter Inlet Lighthouse & Museum. 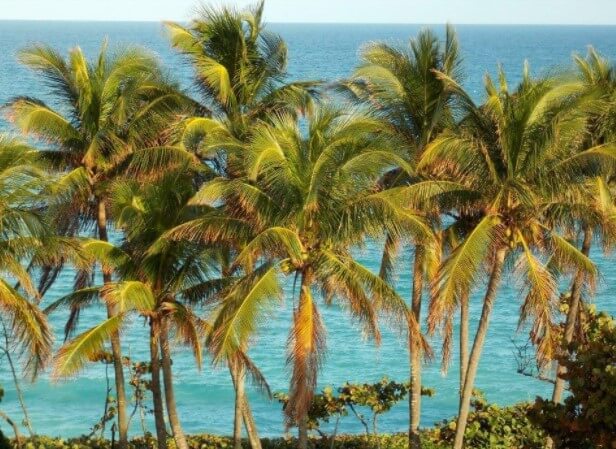 There are many other interesting things to do in Jupiter.  It is well known for fishing as there are many lakes and waterways perfect for anglers of all levels.

Celebrities are also fond of the Jupiter area, too, such as Michael Jordan and Celine Dion, who both have mansions nestled along the Intracoastal on Jupiter Island. 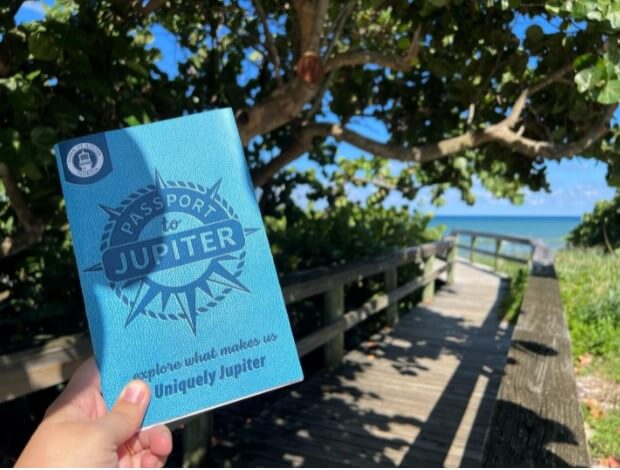 Because of how popular Jupiter is, you might come into some higher prices and gas prices. To help save money on your travel, the Jupiter Passport is available to visitors.

Similar to a City Pass in larger cities, you can grab this at the Jupiter Community Center or Town Hall lobbies, and visit all the listed locations on the list!

THINGS TO DO IN JUPITER FOR KIDS

The Palm Beach Zoo is a great place to visit with your family, as well as Lion Country Safari. If you have kids who love trains, then make a stop at the Jupiter Train Station for a ride on the scenic train! 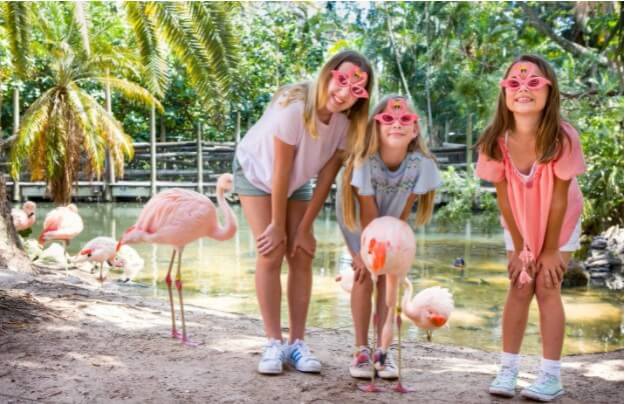 For a day out on the water, take your family to venture onto the Indian River Lagoon for kayaking, paddle boarding or fishing. You can also find boat and jet ski rentals here!

If you're looking for things to do with the family, check out Carlin Park.

This park offers a little bit of everything, including a playground, basketball courts, tennis courts, and a skate park. The beach is also located here if you're looking for some sand and sun. 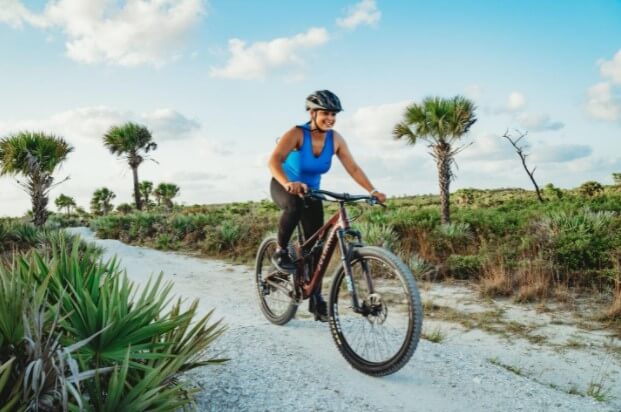 Jupiter is also near Jonathan Dickinson State Park with hiking and biking trails, campsites, and camping cabins.  There are many beautiful nature trails and wildlife viewing areas.

Families can also visit the Carousel at downtown Abacoa Town Center, where kids can ride on brightly colored horses and elephants.

This shopping and dining complex offers something for everyone, including the Maltz Jupiter Theatre, ice cream shops, and several restaurants.

Head over to the Jupiter Riverwalk with the kids, where they can play in the interactive fountain or explore the nature trails.

The Riverwalk also has a playground, a dog park, and plenty of places to sit and relax under the shady oak trees.

One of the oldest homes in Palm Beach County is the DuBois Pioneer Home, located in DuBois Park. The home is open and available for tours free of charge.

It’s also worth noting that Jupiter has several dog-friendly beach areas. View all the beach areas for your dog.

If you're looking for things to do in Jupiter that are a little more low-key, there's always the option of taking a walk or bike ride through Riverbend Park.

It winds through downtown Jupiter and is perfect for visitors to enjoy the playgrounds, fishing pier, kayaking, canoeing, and boat ramps.

If you're looking to get out on the open water, head over to Jupiter Beach Marina where you can rent kayaks, areas to paddle board, pontoon boats, and more.

The marina also has a fishing pier, a tiki bar, and several restaurants.

Loggerhead Marine Life Center is a great place to learn about sea turtles and other marine life, like the Florida Marlins. The center has interactive exhibits, touch tanks, and more.

If you plan your trip between March 1 - October 31, you'll be visiting during the sea turtle nesting season.

You may see many nests along the beaches, but take care not to bother them!

In fact, it's thoughtful for the sea turtles to knock over any sandcastles you made before leaving the beach.

You can take a day trip over to Juno Beach or explore some of the wildlife refuges and nature preserves in the area.

The Loxahatchee National Wildlife Refuge is a great place to see alligators, deer, and bald eagles in their natural habitats.

Busch Wildlife Sanctuary is a rehabilitation center for injured and orphaned wild animals, and they offer guided tours throughout the day.

If you're really lucky, you may even see a manatee swimming in one of the waterways!

You'll find a number of places to stay in Jupiter. One of the places worth mentioning is the Wyndham Grand Jupiter at Harbourside Place.

This waterfront resort offers luxurious rooms and suites, as well as a spa, several restaurants, and a private beach club.

If you're looking for something more affordable, the Hampton Inn Jupiter-I-95 is a great option. It's located close to all the things to do in Jupiter and offers comfortable rooms and free breakfast.

And for those who want a little bit of everything, the Jupiter Beach Resort & Spa offers guests access to its private beach, three swimming pools, two hot tubs, a fitness center, and more. There's also a golf course on-site for those who want to hit the links.

ALL ABOUT JUPITER, FLORIDA

JUPITER THINGS TO DO