Sea turtles on Florida beaches are a common sight during the nesting season  that typically runs from May to October. 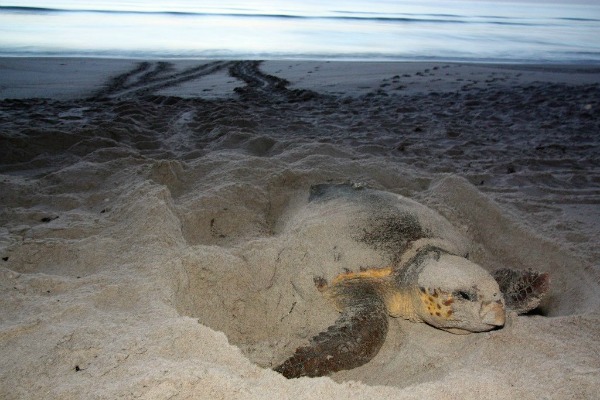 Florida's beaches are famous around the world for their beautiful white sands and year round fun in the sun.

To the sea turtle turtle these beaches are much more than a playground.

It's where they begin their lives as eggs and hatch into little turtles.  It's estimated that each year sea turtles make from 40,000 to 84,000 nests on Florida beaches. 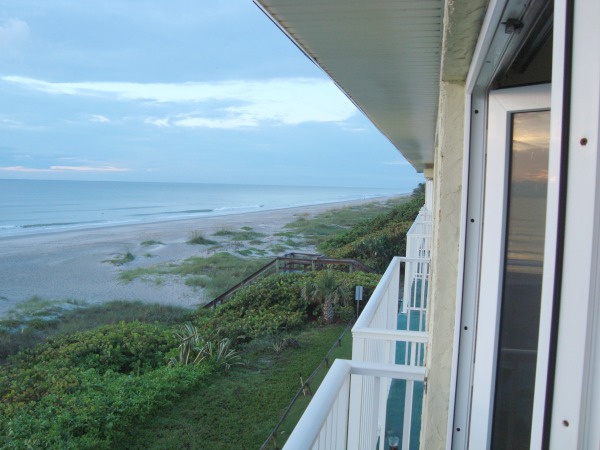 I recently spent a night at a small oceanfront resort in Indialantic, Florida.  My room was on the third and top floor of the inn.  The glass doors looked out directly to the beach and the Atlantic Ocean.

It was turtle nesting season and all hotel guests were required to draw the drapes or turn off the lights after dark.  Mother sea turtles get confused by artificial lights as they head for their nesting territory in the dunes.

It was a beautiful slightly cloudy night and a bit breezy after the recent passage of Tropical Storm Colin.  The sea was just rough enough to produce the rolling waves that make such a beautiful surf sound that is like a lullaby to a tired traveler or beach goer.

Just before midnight I turned off the room lights, drew back the vertical blinds, and opened the glass doors to enjoy the sounds of the surf.  I sat by the open door working on my laptop with the screen facing inside the room like a good turtle protection advocate should do.

After some time, I glanced out to the beach and saw a dark shape slowly crawling up the beach from the ocean.  It was dark enough it could have been a Navy seal or an amphibious terrorist, but it definitely caught my attention.

My eyes had adjusted to the darkness and I soon determined I was watching a sea turtle on her way to lay eggs.  I left my room and went down to the beach to witness the event.

The mama turtles are in a hypnotic trance as they march up the beach on their reproductive mission.  I stood still until she nested and I watched her lay several eggs.  I left before she had completed her mission which might have been to lay as many as 100 eggs. 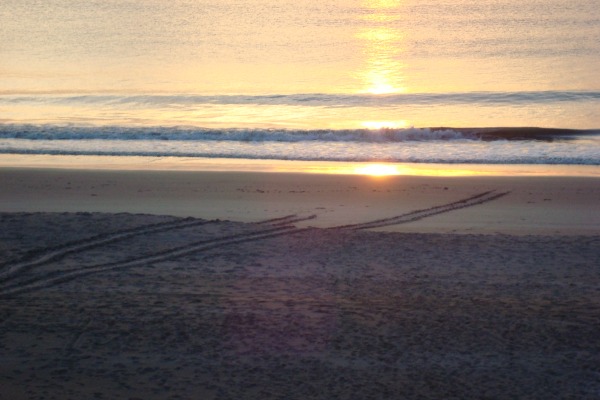 From my room I could see her finish the task and use her flippers to cover the nest with sand.  She trudged wearily back to the ocean.  I believe she was a Loggerhead turtle.

In the morning I could see three other turtle tracks coming up to the dune line and leading back to the ocean.  It had been a busy night for the turtle mothers. 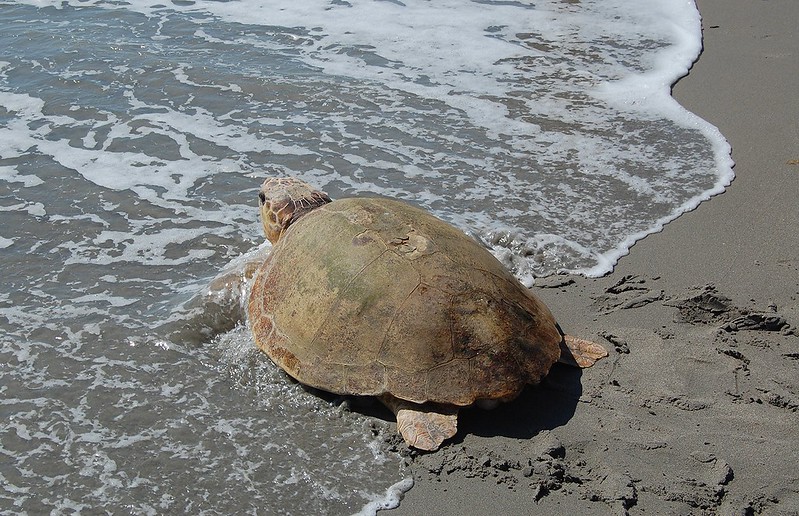 I knew that when the eggs hatched in a couple of months those little turtles that survive their crawl back to the sea will instinctively know to come to this same beach location when they are adults and ready to lay their own eggs.

Among the hazards the eggs must survive are tropical storms and hurricanes.  The photo below shows turtle eggs in Melbourne Beach, Florida that were exposed after severe erosion caused by Tropical Storm Colin on June 8, 2016. 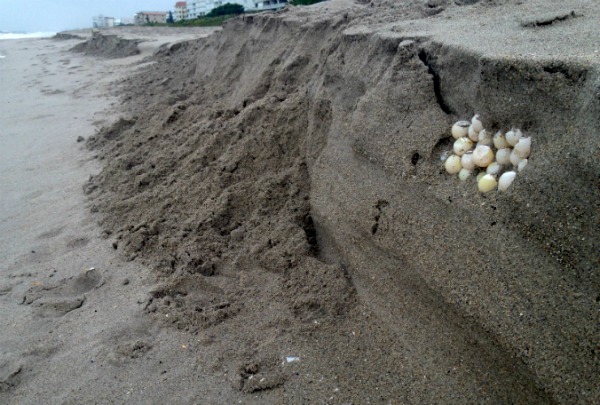 The eggs also have to survive ants, crabs, raccoons, dogs, cats, birds, and any other creature that craves protein.

Early Native Americans and Florida pioneers considered turtle eggs and turtle meat to be a delicacy.   Restaurants offered them up as gourmet food and what wasn't consumed in Florida was shipped up north to hungry Yankees. 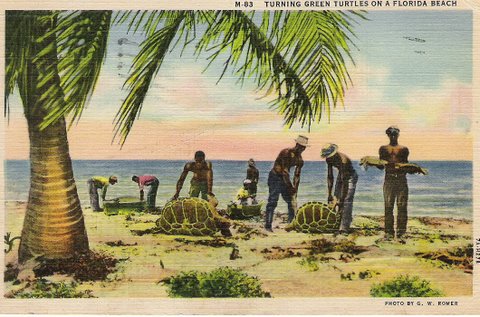 After the eggs hatch the little hatchlings stay in the nest until they have all broken out of their eggs.  Then they all leave at night at the same time and instinctively head for the ocean.  Only about 1 in 1,000 baby turtles survive into adulthood.

They look for the brightest light and in a natural environment that is the horizon of the sea.  This is why lights on shore can distract them and make them head in the wrong direction.

The little critters have to survive dehydration and the hordes of birds, crabs and other animals that want to eat them.  Only the strongest - or luckiest - make it. 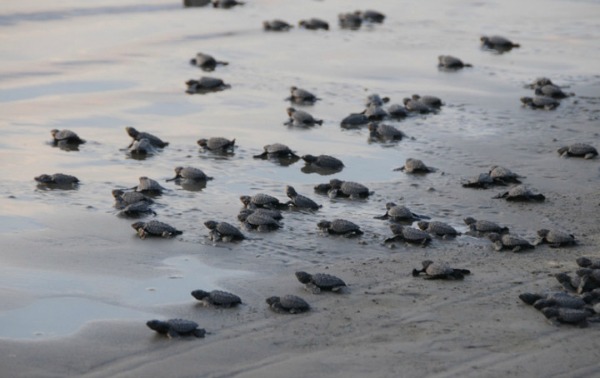 Sea Turtle Hatchlings Head to Sea on a Florida Beach

There are five species of sea turtles that you might see on Florida's beaches:  Hawksbill Turtle, Kemp's Ridley, Loggerhead Turtle, Leatherback Turtle, and Green Turtle.

More information about sea turtles can be found at Florida Fish and Wildlife Conservation Commission and at the Sea Turtle Preservation Society in nearby Melbourne Beach.