Old time radio is indeed very old.  So old in fact this article may fall on deaf ears (no pun intended) unless the reader is of a certain vintage.

You will enjoy reading this if you actually remember some of the old-time radio programs. There are not too many old time radio fans left. 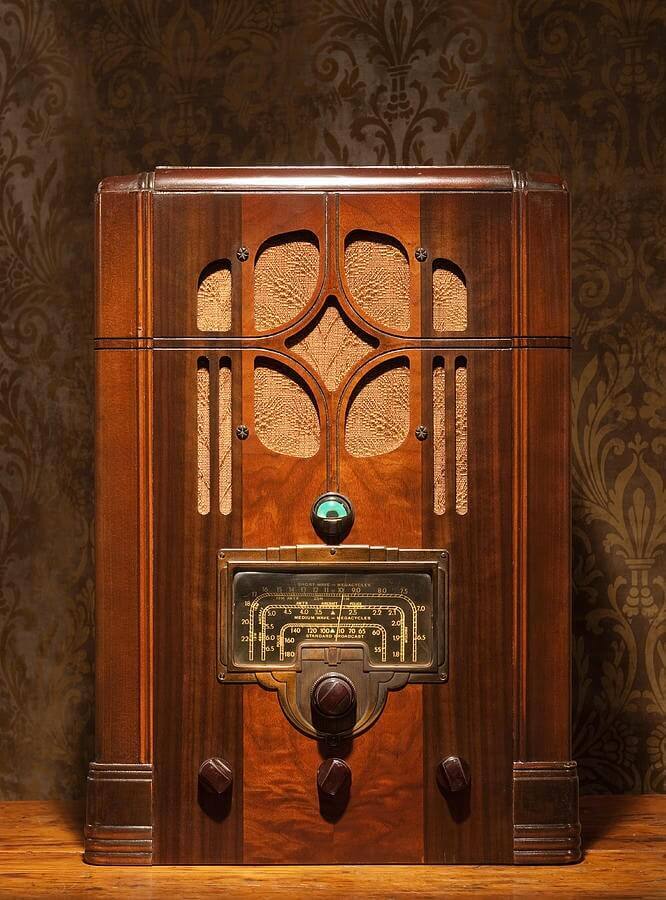 I live in Florida now, and  WDAE in Tampa is the oldest commercial radio station in the state. It started broadcasting almost 100 years ago, in 1922. 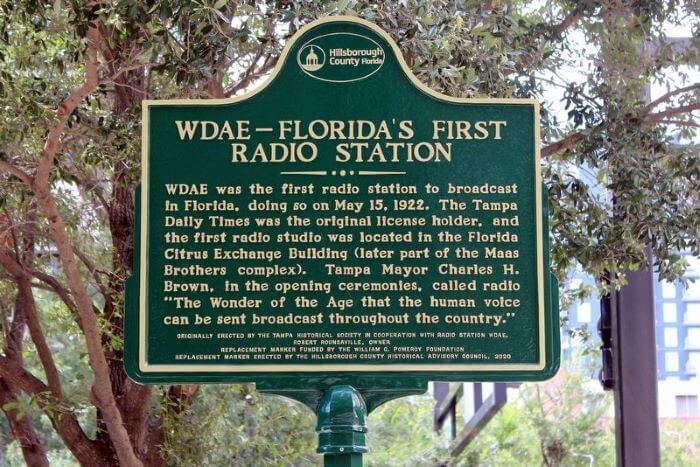 There are now hundreds of AM and FM radio stations in the Sunshine State according to the Federal Communications Commission.

It doesn't really matter where one lives.  Old time radio has thousands of memories that people of all regions of the country can relate to and enjoy.

In fact the culture of old time radio was recognized and shared by people from all locations and in all walks of life. 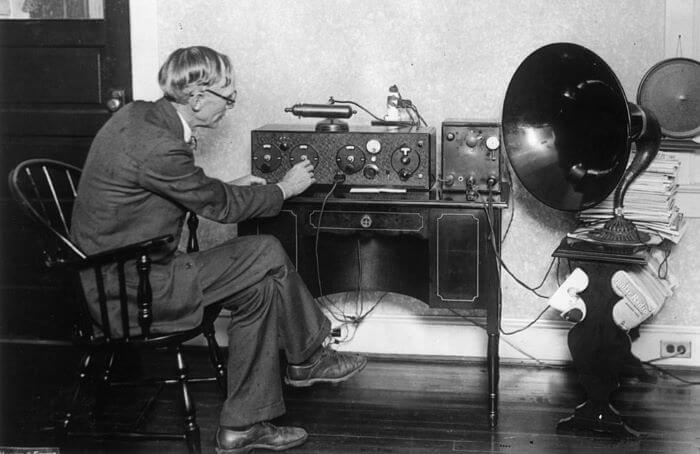 Not many senior citizens are old enough to remember the Golden Age of Radio.  For better or worse, I am of the vintage who remembers. 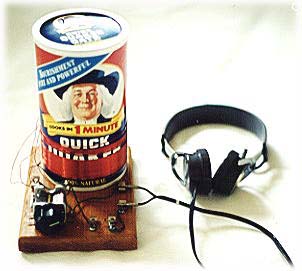 I've been hooked on radio most of my life.  My dad taught me how to build my first crystal radio when I was about 10 years old.  A Quaker Oats box was used to wind the coil.

What a thrill when I tuned in and was able to get my first radio broadcast from a local station.  No cords, no plug ins, no batteries:  it was a self sufficient little receiver.

THE GOLDEN AGE OF RADIO

Radio programs in those days had a way of bonding families together as well as the larger community of the nation and the world. 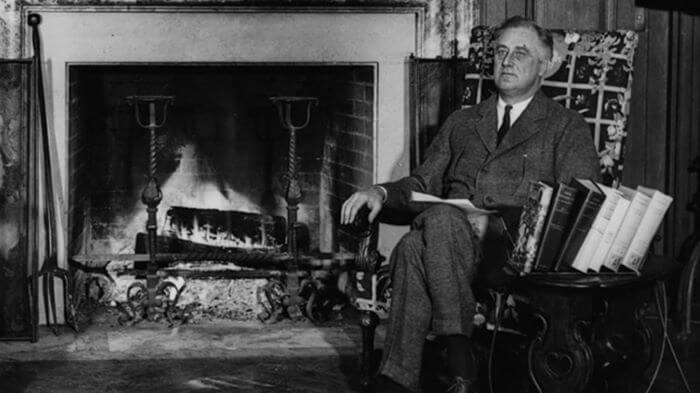 Families who could afford a radio during the Great Depression would never miss one of President Franklin D. Roosevelt's fireside chats.

My mother could remember hearing the famous Orson Welles radio drama, War of the Worlds.  It was a science fiction thriller about an invasion of Earth by Martians. 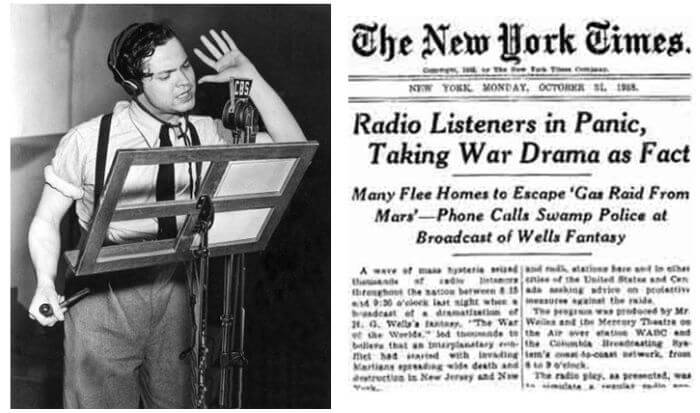 Orson Welles and War of the Worlds

Thousands of Americans panicked because they believed it was the real thing.

She also listened to the broadcast news about the fiery crash of the German dirigible Hindenburg in 1937 at a naval air station in New Jersey.

It was on the radio that they learned the Japanese had bombed Pearl Harbor, and toward the end of the war listened sadly as the death of President Roosevelt was announced.

Not long after, the radio presented the joyful news of VE Day and VJ Day:  Victory in Europe, and Victory over Japan.

OLD TIME RADIO:  THE BEGINNING OF THE END

When television came along big time in the 1950s, it was the beginning of the end for old time radio.  In many ways, it was also the end of imagination.

Listening to the radio required you to imagine the things you couldn't see.  On television you could see it all while turning your brain off.  It began to be called "the boob tube."

Our family got its first television set in 1953. My dad had insisted that we had to save the money to buy one rather than get one on credit like some of our neighbors did.

Before television arrived on the scene, we were like most families in the United States.  We had a radio and it was where we got our home entertainment.

Our living room radio was a floor model console Silvertone from Sears Roebuck. Those old radios had vacuum tubes because transistors had not yet been invented.

The kitchen radio was a small modern plastic RCA model we would listen to at lunch and supper.  The important program then was the local news.

It’s how we found out who had died.  As a kid, it always bothered me that somebody died every day.

Family entertainment in my time was usually in the home living room, sitting around the radio listening. In the winter we would have a fire crackling away in the fireplace.

As a family unit, our favorite shows included comedy shows, mystery shows, westerns, and the news.

They were faceless celebrities in our home we felt we knew.

A big part of the humor in these shows was waiting in delightful anticipation for something you knew was going to happen. 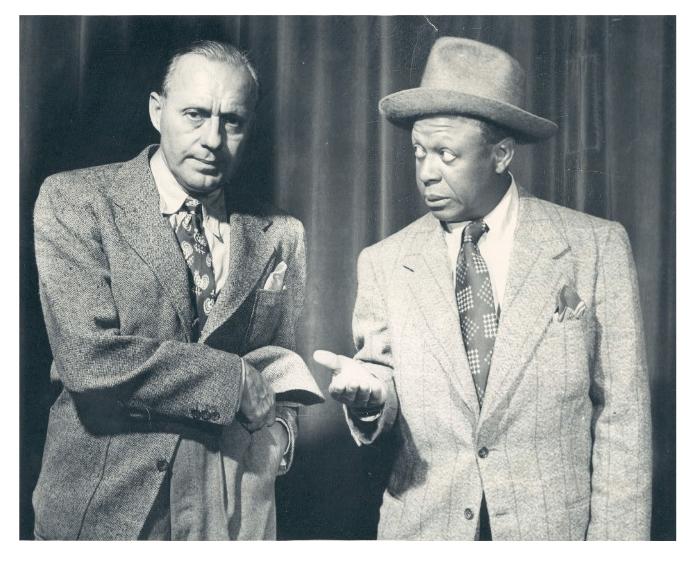 An example would be a segment featuring Jack Benny’s famous stinginess or Fibber McGee’s famous closet.

The image of Jack Benny’s stinginess resulted in what is reportedly the longest laugh in radio history.

One night on the program, Jack was accosted by a mugger on a city street.  The mugger said to Jack, “Your money or your life.”

Then followed a long pause.  Our laughter began building during that pause.  At last the mugger repeated, “Look, bud.  I said your money or your life.”

Jack then replied “I’m thinking it over.”

I was a kid when I heard that show, but I will never forget our entire family enjoying that uncontrollable laughter you get and sometimes almost can’t stop:  a true good old fashioned laughing jag.

Then there was the fun of Fibber McGee’s hall closet.

We all knew that Fibber’s closet was so jammed full of stuff that if he opened the door everything in there would come crashing out.  Even though we knew it, Fibber always forgot it. 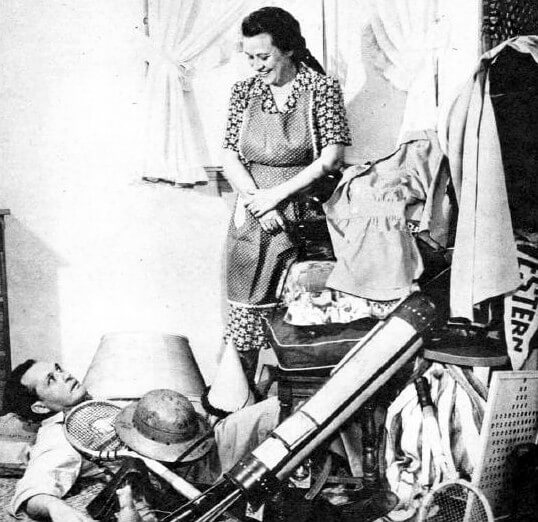 Molly Laughing at Fibber After He Opened His Famous Closet

He would announce during the program he was about to look for something in the hall closet.  Although Molly pleaded with him not to open the closet, he would do it any way.

For many long seconds after this the radio waves were filled with the sound effects of noisy stuff banging all over the place.  We would laugh along with the program’s laughing sound track.

Fred Allen’s show had a segment where he interviewed the residents of the fictional Allen’s Alley.  My favorite was Senator Beauregard Claghorn, a parody of a senator from the Deep South. 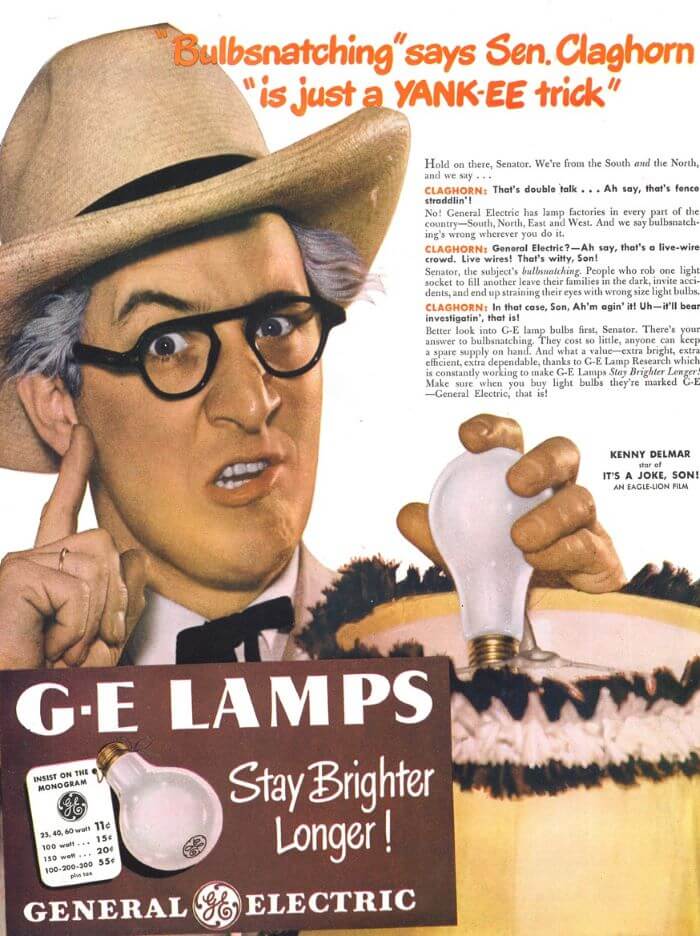 He was such a diehard Southerner he even refused to wear a union suit, the most well known underwear of the day.

Sometimes when a listener would take offense at something the Senator would say, he'd reply "It's a joke, son!"

Young whippersnappers may not know that the Senator was the original inspiration for Foghorn Leghorn, a cartoon character. 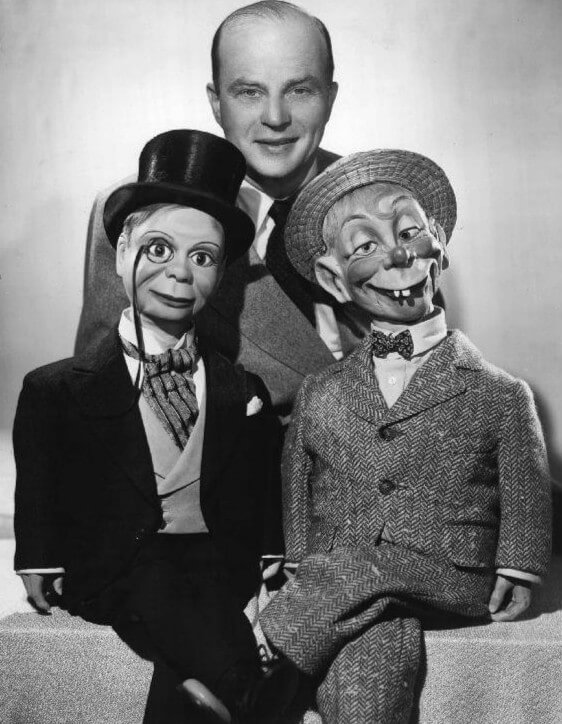 If my dad didn’t like a show, it would not make it onto our living room radio.  We would have to sneak out and listen to Edgar Bergen and Charlie McCarthy.

My dad did not like Charlie’s smart aleck attitude and warned us what would happen to us if we ever talked back to him the way Charlie smart mouthed Edgar.

He was also skeptical that anyone could really be as dumb as Mortimer Snerd.

It wasn't until television came along that we discovered Edgar Bergen was really not as great a ventriloquist as we had thought. We could see his lips move when Charlie or Mortimer talked.

Television all but ended the careers for all three of these guys when that secret got out.  Edgar's daughter Candice made up for it with a great modeling and television career.

For mysteries there was nothing we enjoyed more than The Adventures of Sam Spade,  Johnny Dollar and His Action Packed Expense Account,  The Green Hornet, and The Shadow.

Everybody knew the famous opening line: "Only the Shadow knows."

That show was followed closely in our affection by Have Gun Will Travel, starring John Dehner as Paladin. 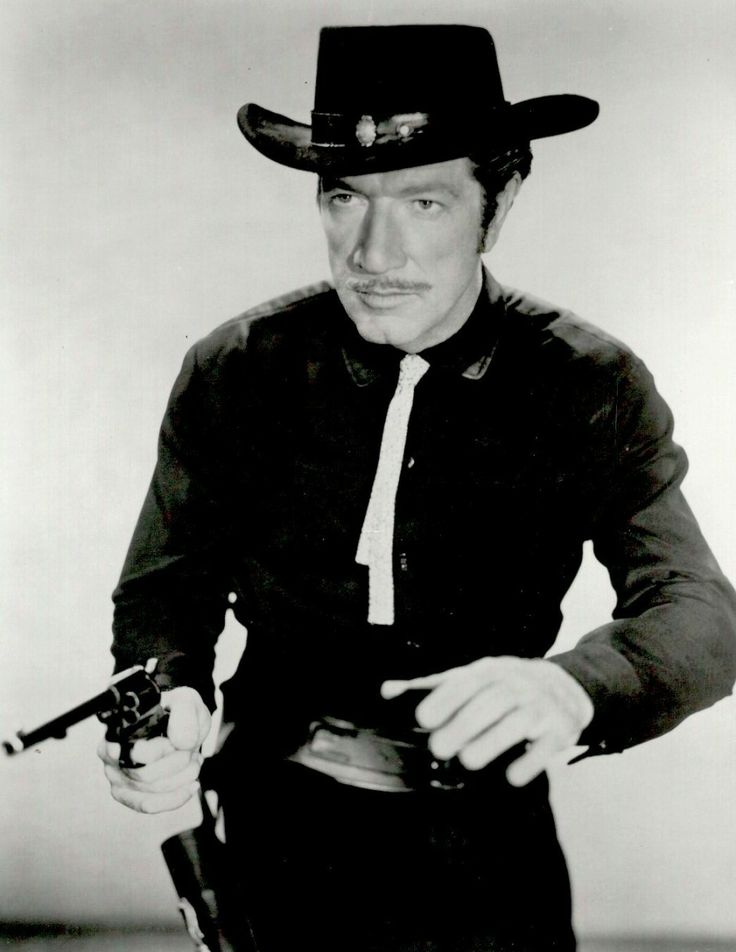 These two westerns made a successful transition to television, with James Arness becoming Matt Dillon and Richard Boone playing Paladin.

Kids getting home from school in the afternoon loved to listen to the Cisco Kid, The Lone Ranger, Hopalong Cassidy, and Bobby Benson and the B-Bar-B Riders.

As mentioned earlier, my first radio was a crystal set I made from simple parts.  It was thrilling to build something with no vacuum tubes or batteries that would receive radio signals.

The drawback to the little radio is that it wouldn’t receive much other than local stations.

When I finally got my own real radio – with vacuum tubes - I could listen to my favorite shows that were not appreciated by the rest of the family.

I also became an avid shortwave listener after building my own receiver from a Heathkit.

Television killed most of the old time radio programs we loved, but a couple of broadcasters at least saved the day for AM radio.

One was Paul Harvey.  He started his radio career in 1951 just as television was catching on.  Not only did he survive, but he broadcast the news until 2008, the year before he died.

He was famous not only for the news, but for his "The Rest of the Story" segments.  He reached a listening audience of 24 million people each week.  And now you know the rest of the story

By the time we got our first television set my grandmother, who lived in an apartment above our home, was almost blind and couldn't enjoy the television given her by Uncle Ray. 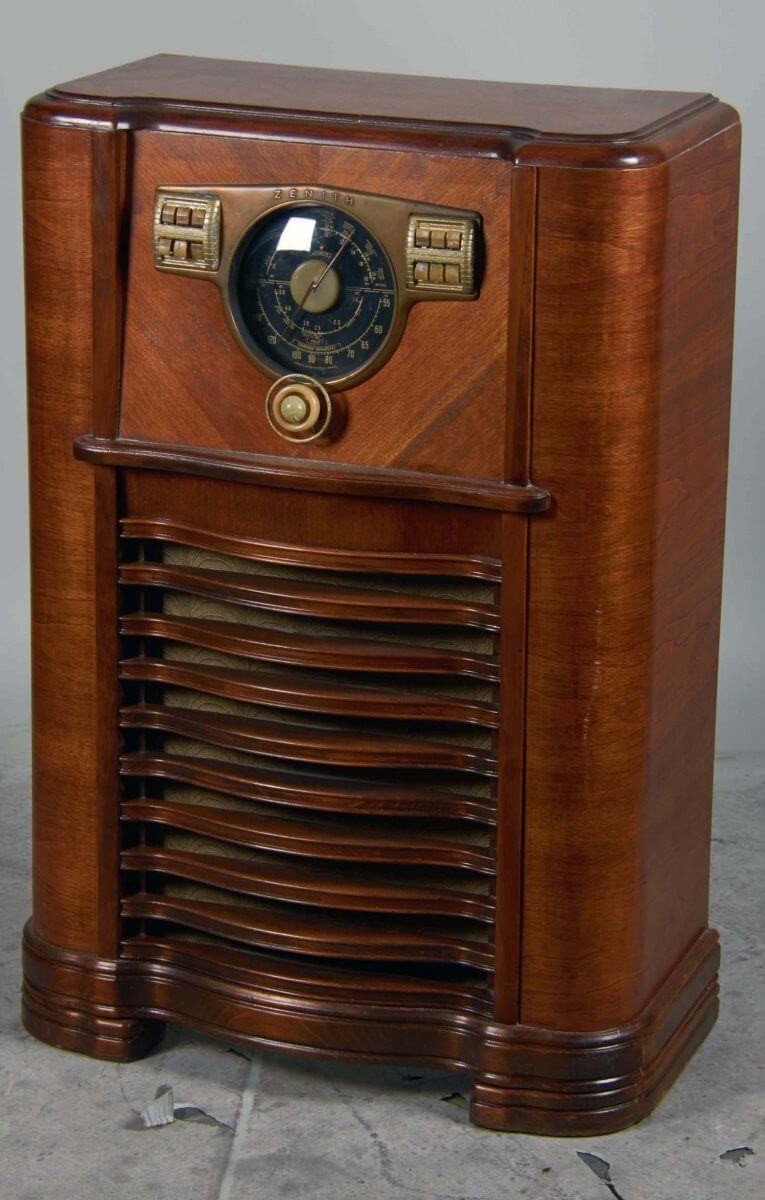 Years earlier he had given her a large floor model Zenith radio. I enjoyed sitting with Grandma and listening to Paul Harvey and the News.

When Paul would make a point, my grandmother would lean forward in her rocking chair and get close to the radio.  She would nod in approval and say "You are right, Paul. That's the way it is." 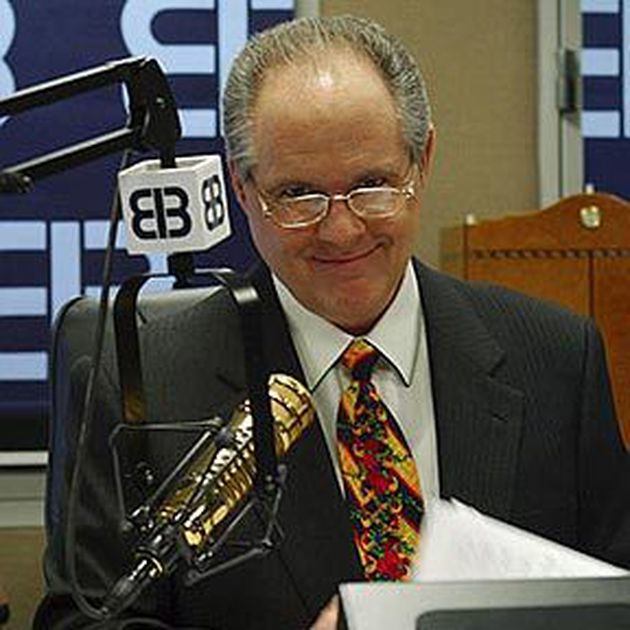 The other was Rush Limbaugh.

The most listened to radio stations were FM because they provided clearer reception of music.  AM stations were on their death beds.

Then along came Rush Limbaugh in the late 1980s with what became the most successful talk show in history.  His programs were carried live every week day for three hours on AM radio.

His call screener for many years was given the stage name Bo Snerdely.

Bo's real name was James Golden, and I would guess Rush thought up the name after hearing of Mortimer Snerd on the old Edgar Bergen show.

At the time of his death in 2021, Rush Limbaugh was being broadcast on 650 radio stations and had as many as 20 million listeners.

REVISIT THE GOLDEN AGE OF RADIO

There are probably audio CDs and online radio stations that feature some of these old time shows, but I have found a better way.

For a long time now I have been enjoying the fantastic online Internet Archive collection.

All of my favorite old time radio shows are there, and I can listen to them on my computer, commercials and all.

It makes me into a time traveler.

ENJOY YOUR FAVORITE PROGRAMS FROM
THE GOLDEN AGE OF RADIO