Rockledge, Florida Things To Do, Lodging, Dining, & Real Estate At End Of Article

Rockledge is in Central East Florida along the western shore of the Indian River.  It is adjacent to and immediately south of Cocoa and about 55 miles east of Orlando.  Its population in 2021 is about 28,000. 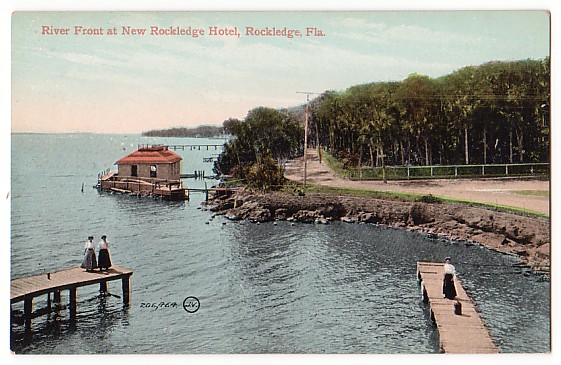 A unique feature of Rockledge is that is is bounded by two major Florida rivers that have been a large part of Florida's history:  the Indian River on the east and the St. Johns River on the west. 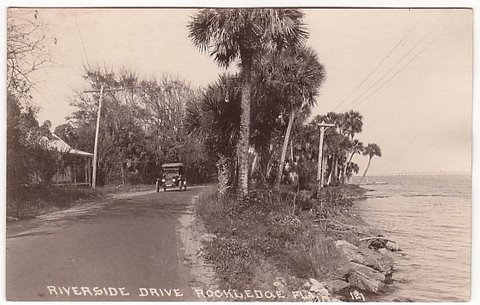 Riverside Drive in the Early Days

Gardner S. Hardee was an early settler given credit for coming up the with town's name.

It is named for the ledges of coquina rock that are prominent all along the shoreline of the Indian River in this area. 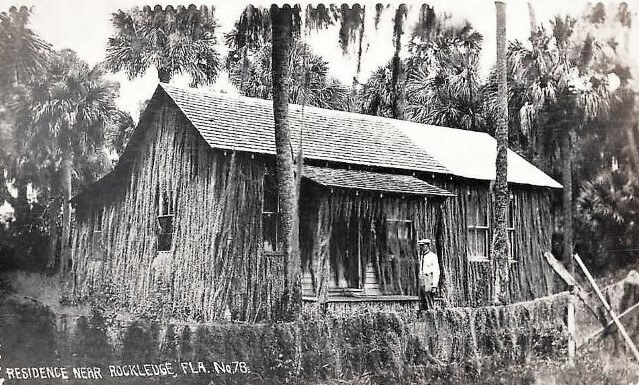 The growing, packing, and shipping of citrus were the most important industries in the area in the early days.

The importance of tourism also came to Rockledge before many other areas in the state. 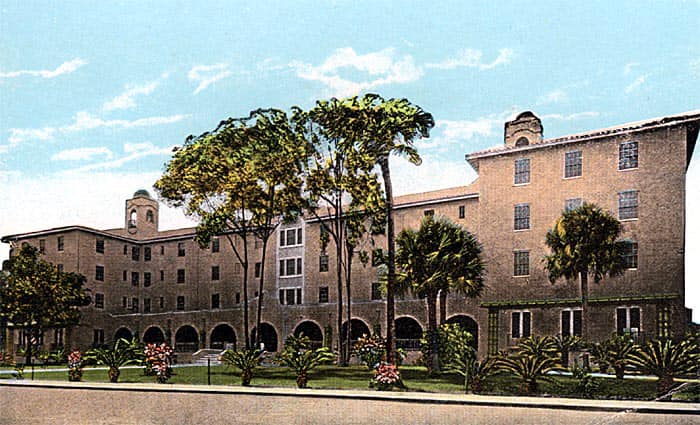 In the years before the railroad, tourists and products relied on the Indian River for transportation.  Some even came by way of the St. Johns River and were transported over land into Rockledge.

Rockledge had several large resort hotels in the late 1800s and early 1900s that included the Hotel Indian River, the Plaza, and the Rockledge Hotel. 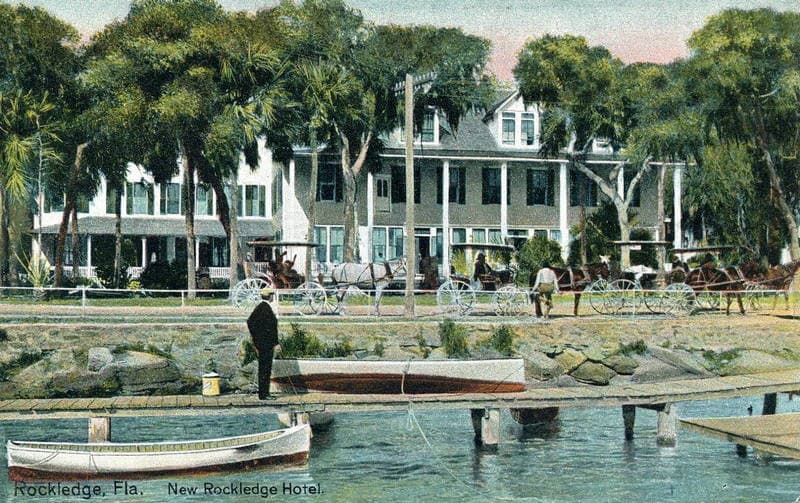 These were located north of Barton Boulevard and had views of the Indian River. 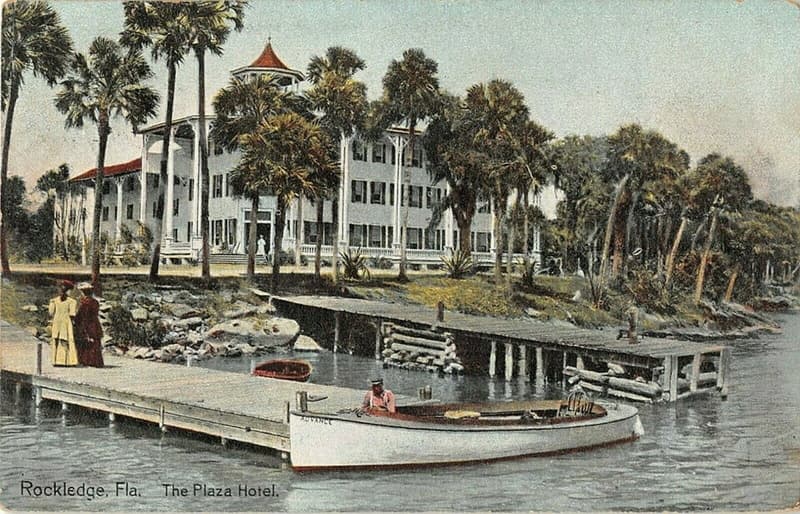 In the late 1800s the Florida East Coast Railway was extended through Rockledge.  Not long after that, the Dixie Highway opened the area to busses and cars.

It became US-1 and Rockledge began to grow into a prosperous small town that was larger in the winter because of tourists.

Many of those early snowbirds became permanent residents. 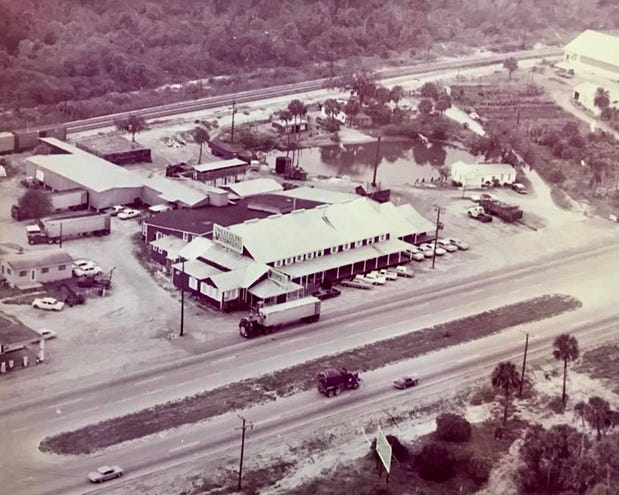 THE SPACE BOOM COMES TO ROCKLEDGE

It became a bedroom community for thousands of aerospace workers and their families as Kennedy Space Center began to boom related to the Apollo moon landing mission.

The town began to expand in the late 1950s west toward the St. Johns River and south toward the huge Duda Ranch that has become what is now the large planned communities of Viera and Suntree. 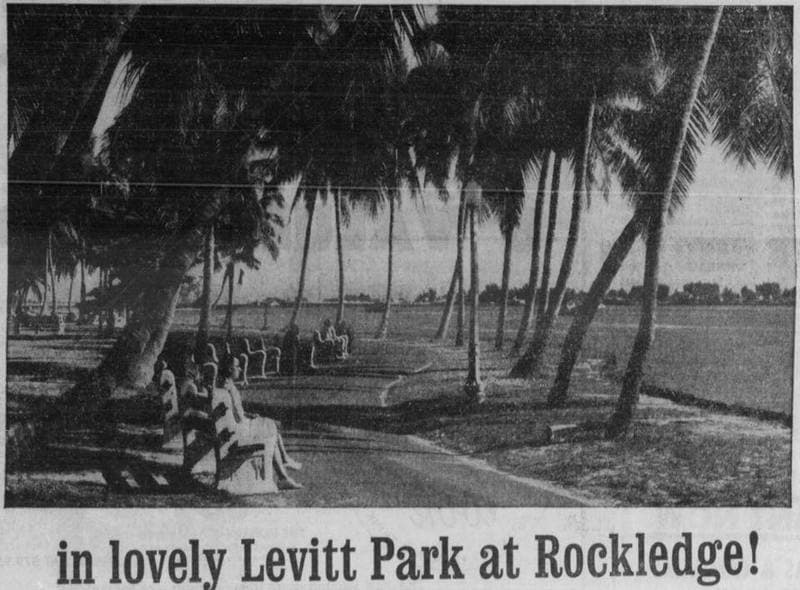 Barton Boulevard between US-1 and Fiske Boulevard became the town center for serve all of these new families.

Rockledge expanded further in the 1980s and is still doing so.  Many businesses and residential neighborhoods are now also located along Barnes Boulevard in the south part of the city.

A different street, Barton Avenue, between US-1 and the Indian River stayed largely residential and was formerly the center of the town.

There are many historic homes between US-1 and the river on Barton Avenue.

The old Rockledge City Hall (I remember doing business there with City Manager Gus Hipp) is at the corner of Barton Avenue and Rockledge Drive. 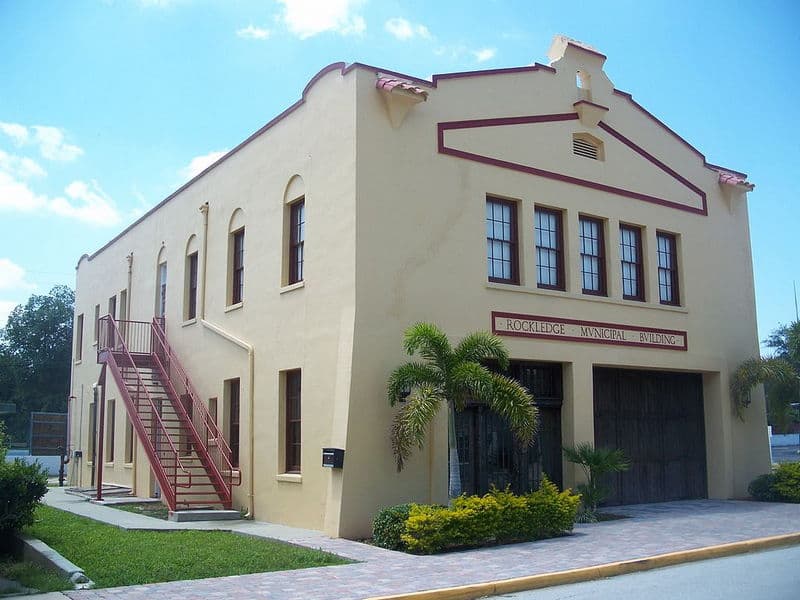 The major north-south routes in Rockledge are Fiske Boulevard on the west and US-1 on the east.  Rockledge Drive runs north and south along the Indian River and is a residential street.

Most of the population lives in the area south of Barton Boulevard, so that thoroughfare developed naturally as the business center of the city. 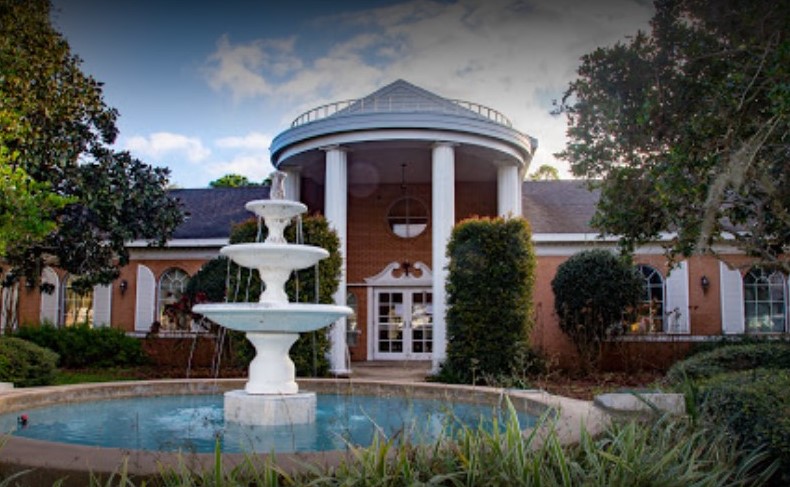 There are shopping centers and restaurants along Barton Boulevard, along with Rockledge City Hall.

The expansion of the city south in recent years has also made the east-west route of Barnes Boulevard a major business and residential corridor. 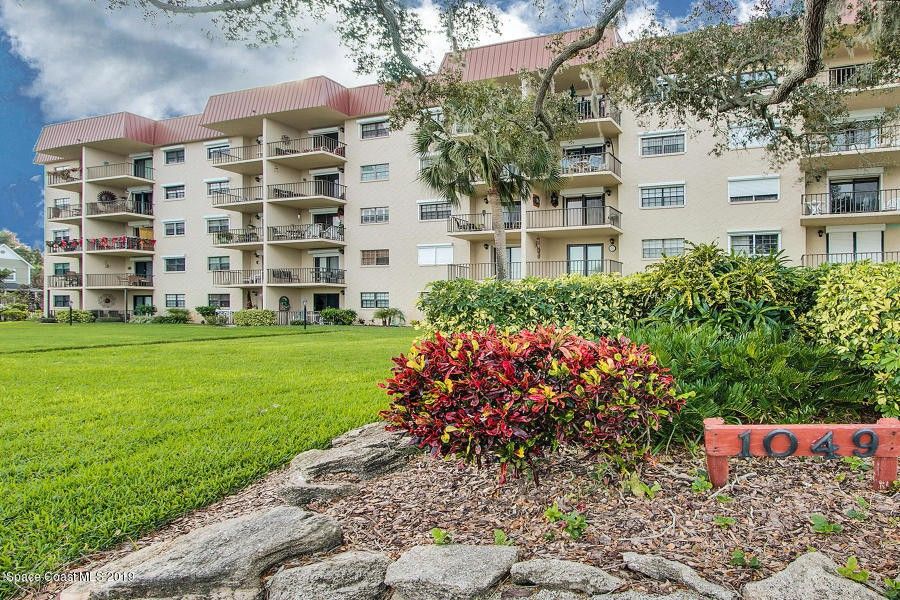 Rockledge Drive stretches along the Indian River shoreline from the Cocoa city limits south through Rockledge to the historic community of Bonaventure where it joins US-1.

A modern condominium, Indian River Club, was built in the 1970s on the Rockledge Drive site of one of the historic older hotels. 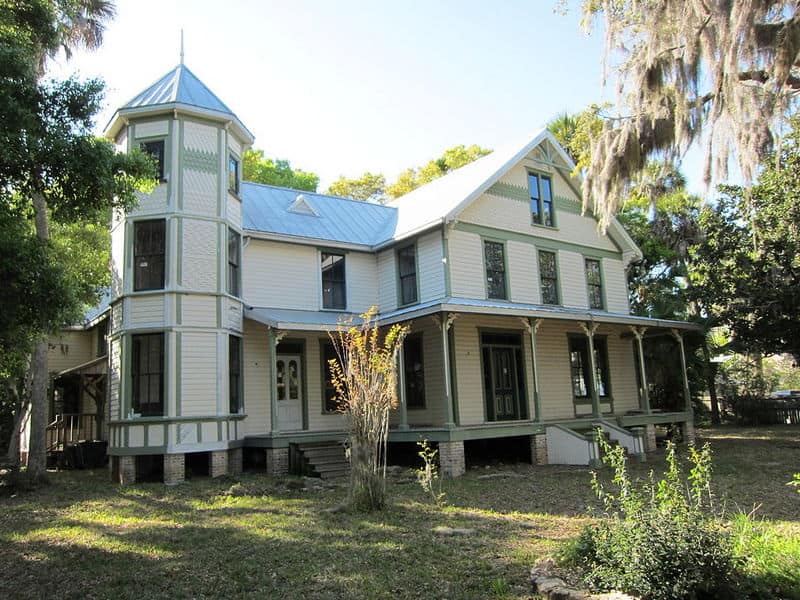 Some of the nicest historic homes and beautiful tree canopies are along this long rocky Indian River shoreline.

The H. S. Williams House at 1219 Rockledge drive, shown in the photo above, has been restored and furnished as a typical family home of 1895.

It is open to the public the first Saturday of each month from 10-4 as a living history educational site.

This drive and several others are described in this website at Central East Florida Road Trips. 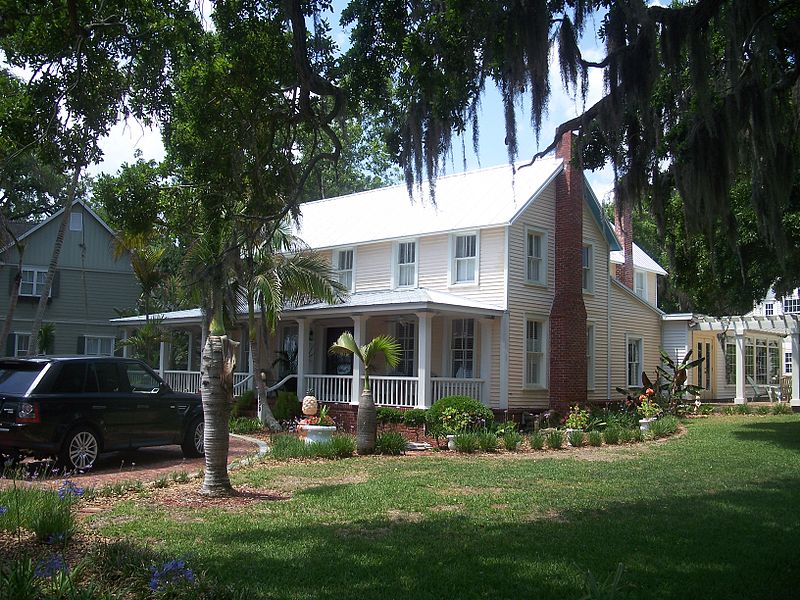 The City of Rockledge has done a good job in historic preservation and in making sure there are plenty of parks for the city's citizens.

An example of a well preserved historic development is Valencia on Rockledge Drive.

The entrance to the tree lined neighborhood is still flanked by columns reflecting the original entrance shown in the rendering above.

The local economy of Rockledge includes many technology firms providing goods and services to the programs at Kennedy Space Center.

Some interesting places to visit in Rockledge include:

Ashley's Restaurant and Bar is a favorite Rockledge restaurant on US-1.

It is rumored to be haunted by ghosts and appears in many paranormal publications on the subject. 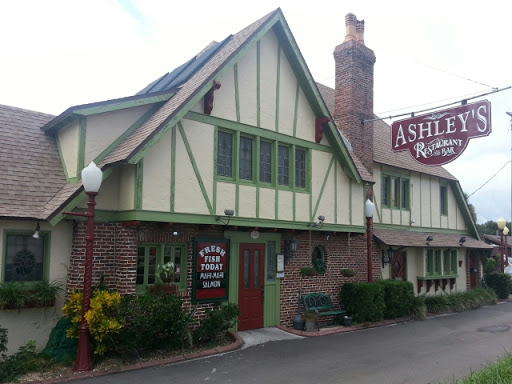 It has enjoyed many different names over the years including "The Loose Caboose" referring to its location next to the railroad tracks.

ROCKLEDGE THINGS TO DO