Carrabelle, Florida Things To Do, Lodging, Dining, & Real Estate At End Of Article

It is about 53 miles southwest of Tallahassee and has a population of about 2,600. 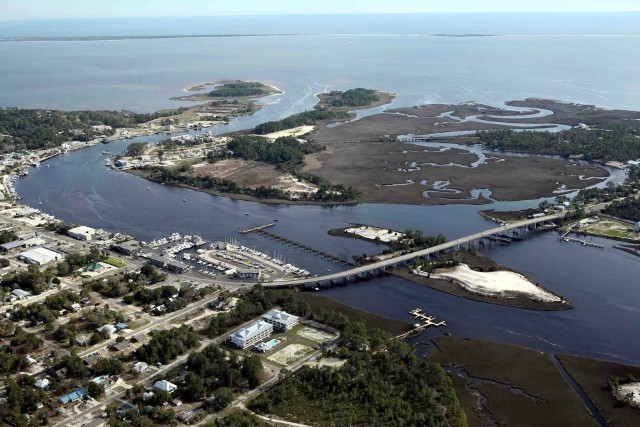 The Big Bend area has also been known in recent years as "The Forgotten Coast".

It is all within Franklin County, one of those few counties that remain unspoiled, one of the last in the eastern United States.

Carrabelle's visitors come by car on US-98arrive via the bridge, through US highway 98 or County Road 67 from the north.

There is a small municipal airport for charter for private planes, but the nearest major airports are inTallahassee or Panama City.

Carrabelle is often called the Gateway to the Gulf due to its unique location along the coast, and has the area's only deep water port. There are many marinas and fishing continues to be abundant.

Nearby St. George Island shares much of its history and is accessed by a bridge on US-98 at Eastpoint, about 16 miles west of Carrabelle.

Isolated Dog Island is about 3 miles offshore of Carrabelle and can be reached only by plane or boat.

There no public facilities on Dog Island, including no food, water, or restrooms. 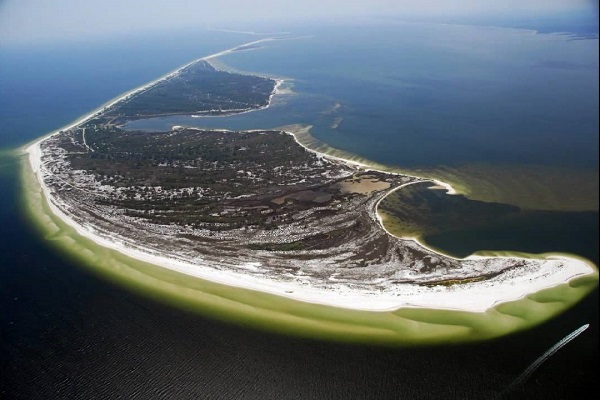 The beaches of Dog Island, because of their remoteness and lack of development, are the nesting grounds for many endangered species of birds.

Those few people who visit the island are encouraged to respect these fragile nesting grounds.

Carrabelle and Dog Island were sleepy little places until right after the U.S. Civil War.  Early inhabitants consisted of Indians and then European settlers.

The heavily forested land was abundant with wildlife, making easy hunting and trading for furs and food.

After the Civil War the vast forests surrounding the area made lumber and naval stores the lifeblood of the economy. The first lumber mill was built in 1875.

Pine and cypress cut from the lands upstream surrounding the Carrabelle River were floated down to the mill for cutting into lumber.

The lumber was then shipped from Carrabelle to northern markets.

By 1893 Carrabelle had become a boom town in the lumber industry. The docks along the river were stacked high with lumber and turpentine ready for shipping.

The railroad had also come to town and the products of the local fishermen, especially mullet, were shipped by rail to markets in the north and south. 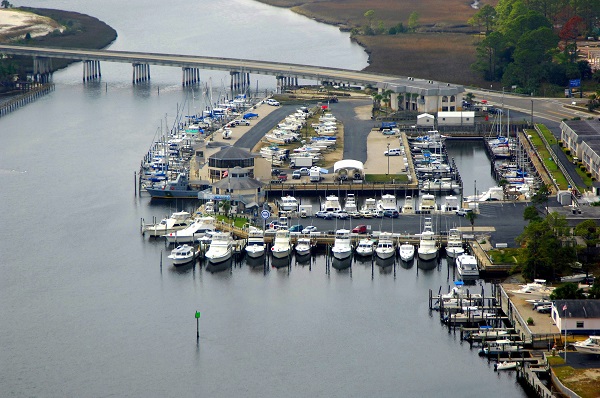 Marina on river at Carrabelle, Florida

At the turn of the twentieth century, a major hurricane almost destroyed Carrabelle.

The downtown was moved closer to its present location and many new buildings were built.

The Crooked River Lighthouse, also known as the Carrabelle Light, was erected to help ships navigate through the area after three others at Dog Island were destroyed by hurricanes.

This is now open to the public, offering a glimpse into the area's history. 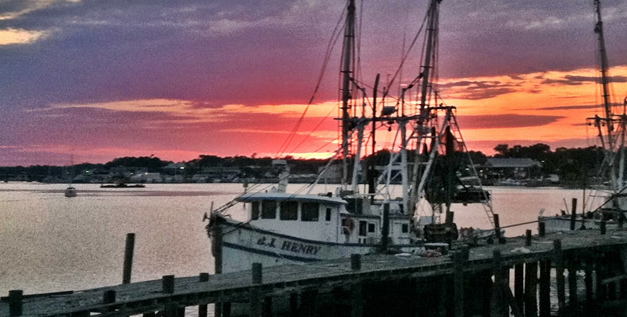 Part of the Carrabelle Fishing Fleet

The years between World War I and World War II were very hard for Carrabelle. The lumber and naval stores industries disappeared and fishing became the main occupation of most area residents. 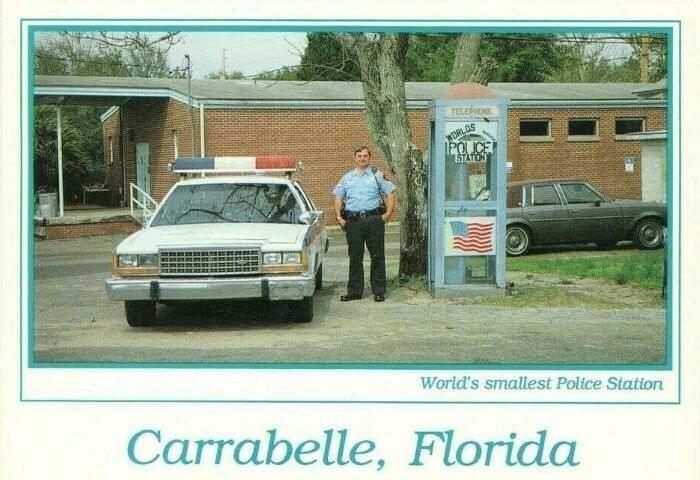 The depression had Carrabelle in its grip. There was a period of time during the Prohibition era when quite a few locals made their living smuggling in liquor from the Caribbean.

Carrabelle, Florida Had a Role in World War Two 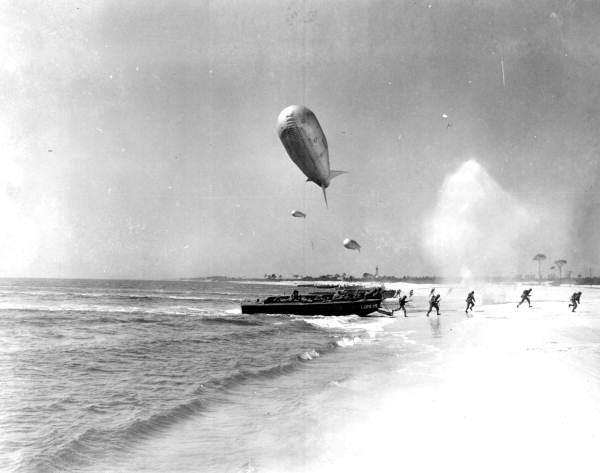 In the very early years of World War Two, the U.S. government bought 165,000 acres of forest and beach land surrounding Carrabelle. By 1942 they had constructed Camp Gordon Johnston. 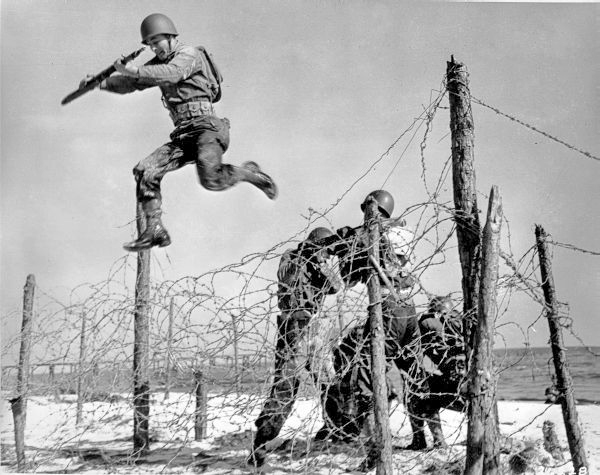 Thousands of men were trained in amphibious warfare at this base; the nearby beaches were practice grounds for later wartime landings in Italy and Normandy.

The land was sold off after the war, and Carrabelle again retreated into it's quiet prewar existence.

Not much remains of Camp Gordon Johnston except for a few buildings north of Carrabelle in Lanark.

Today's Carrabelle is still quiet and the economy is centered around the waterfront and is considered a "walkable" community.

There are no chain hotels or motels in town, just three little local places that cater to visitors that like peace and quiet. 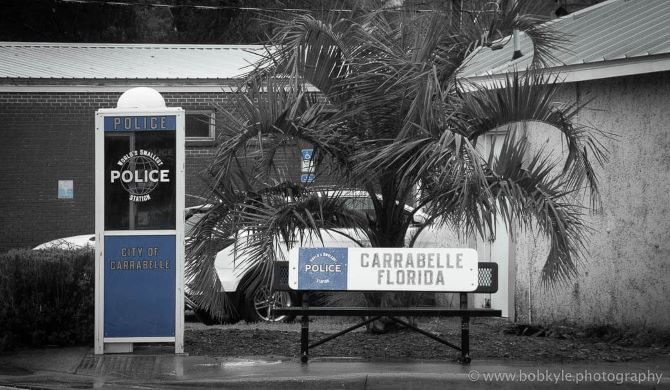 One of Carrabelle's fun facts is they have the world's smallest police station.

Although it's not really a police station, tourists still like to have their photos taken standing next to Carrabelle's alleged "world's smallest police station".

The true story is that it began as a police phone booth years ago. 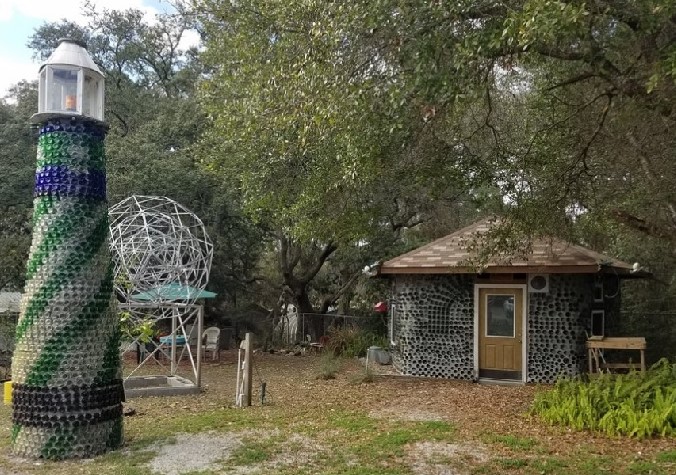 Another interesting little place that has been attracting visitors since 2012 is the Carrabelle Bottle House.  It is open to the public and no admission is charged.

The bottle house and adjacent lighthouse made out of bottles are lit up at night and are fun to see.  These are the creation of Leon Wiesener. 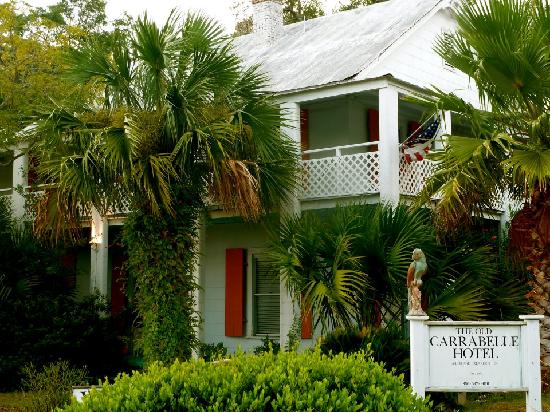 How Tate's Hell State Forest Got Its Name

Tate's Hell State Forest is near Carrabelle.  It is 202,437 acres located both in Franklin and Liberty Counties.  There are several tales about how it got its name. 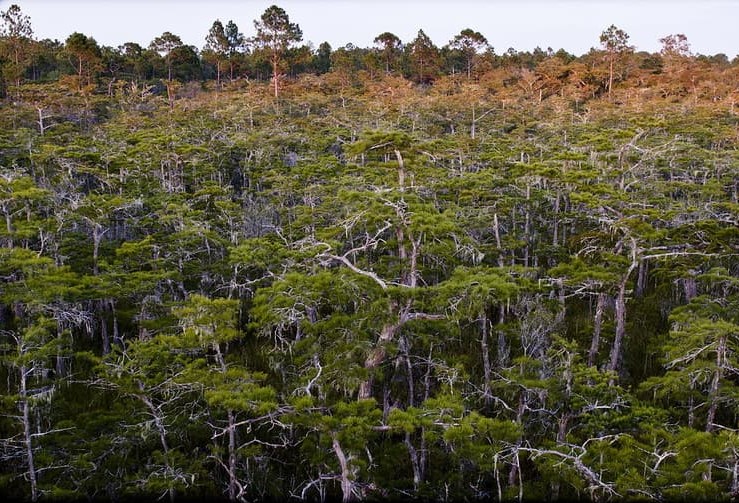 The most told story has a man named Cebe Tate lost in the swamp for seven days and seven nights in 1875.  He drank swamp water to stay alive and was bitten by a snake.

When he finally stumbled out of the woods he lived only long enough to say:

"My name is Cebe Tate, and I just came from Hell."

ALL ABOUT CARRABELLE, FLORIDA

CARRABELLE THINGS TO DO