Dunedin, Florida Things To Do, Lodging, Dining, & Real Estate At End Of Article

Dunedin, Florida is a city of about 36,000 on the Gulf coast between Clearwater and Tarpon Springs.  It is the fifth largest city in Pinellas County. 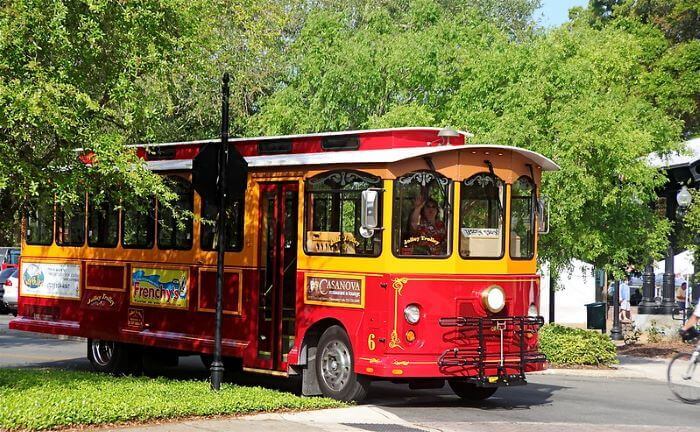 Most of Dunedin is located west of US-19 on Alternate 19 which runs along the shoreline and is known locally as Edgewater Drive.

Dunedin is one of the oldest cities on the Florida Gulf coast.

It was settled in the late 1860s and was originally named Jonesboro after the owner of the general store.

The name was changed in 1878 to Dunedin by two Scotsmen who came to the area. 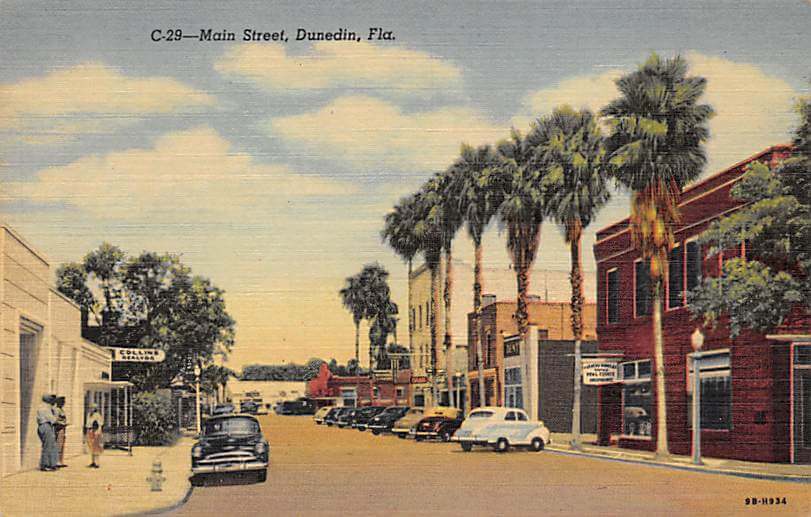 "Dun", which is a term for "town", and "Edin" a form of the name of Edana, an Irish saint that many churches in Scotland were named after.

The capital of Scotland is Edinburgh, a Scottish Gaelic name derived from these same terms. 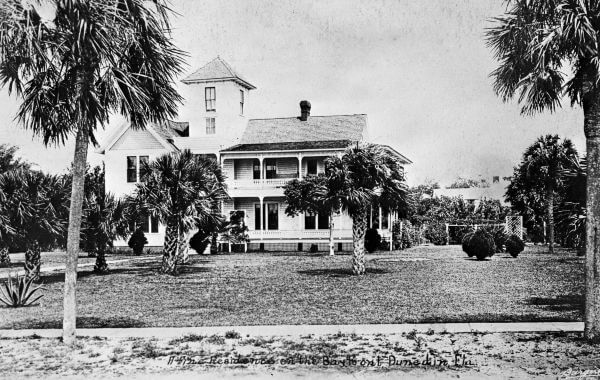 The Orange Belt Railway came through Dunedin in 1888.  It was the first railroad in the area that connected central Florida to St. Petersburg.

A large dock was built to handle ocean going sailing ships and Dunedin became an important port by the end of the 1800s and into the 1900s.

The town prospered during this era and many fine homes were built.

It was incorporated as the City of Dunedin in 1925.

The Dunedin History Museum has preserved the interesting history of Honeymoon Island.

Today the island is one of the most popular beaches in the Dunedin area, and is the site of Honeymoon Island State Park.

In the 1930s Clinton Washburn owned the island that was then named Hog Island because it contained a hog farm.  He and his wife created the idea of a contest to publicize the island. 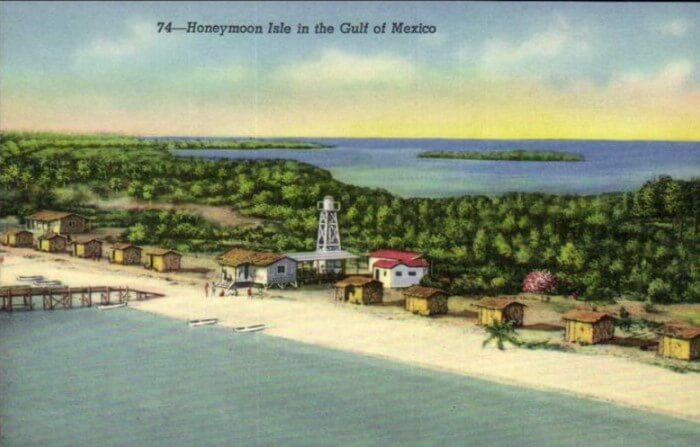 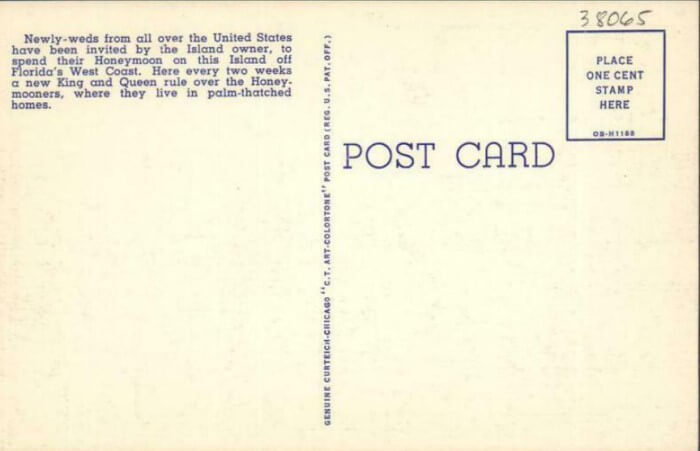 Washburn built small wooden bungalows with palm thatched roofs directly on the beach.  Winners of the contest were given free vacation stays in the bungalows.

This promotion was very popular until World War Two began in 1941.  It introduced the Dunedin area to an entirely new generation, making it a tourist destination.

A unique attraction in Dunedin is its waterfront.  It is one of the few cities in Florida where the waterfront is not completely hidden from view by high rise buildings. 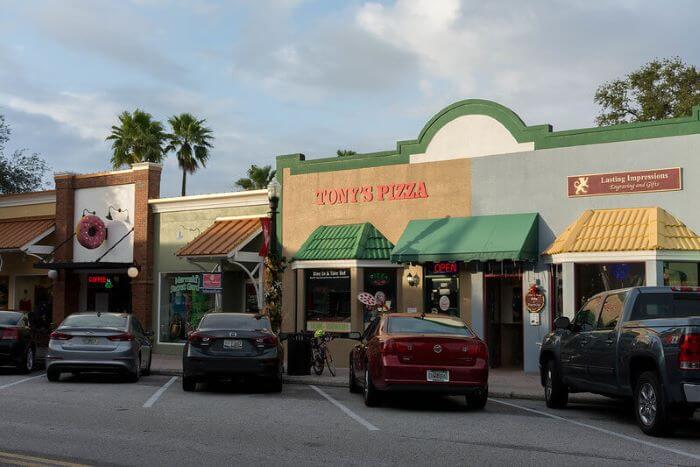 More than one mile of Edgewater Drive along the shoreline has a clear view of the Intracoastal Waterway, Caladesi Island, Honeymoon Island, and the Gulf of Mexico beyond.

Edgewater Drive is home to the Fenway Hotel, built in 1924 and an icon of the jazz age. 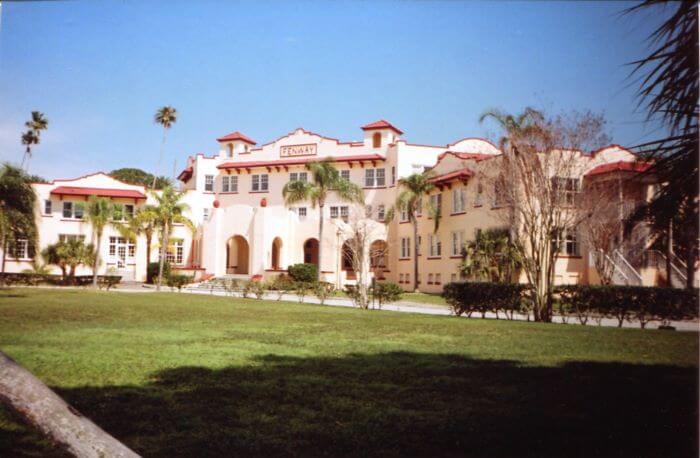 Known as the Grand Lady of Dunedin, it has a rich history of guests and served as the location of the county's first radio station.

Now fully remodeled by Marriott to modernize it while still keeping her history in mind, it would be a great place to spend a vacation or hold a wedding celebration complete with live music. 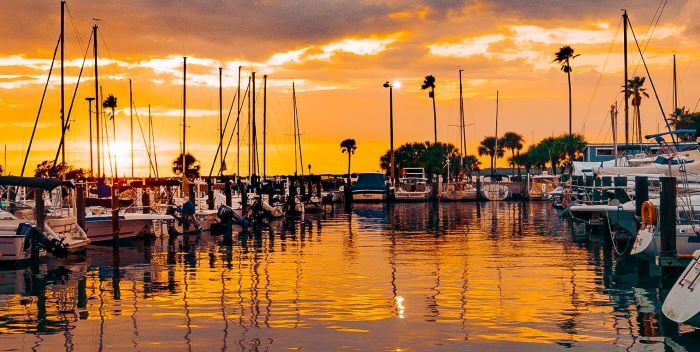 This stretch of road also has a pedestrian and cyclist pathway along the water.

The Dunedin Marina is one of the nicest in Florida.  It is owned by the City of Dunedin. 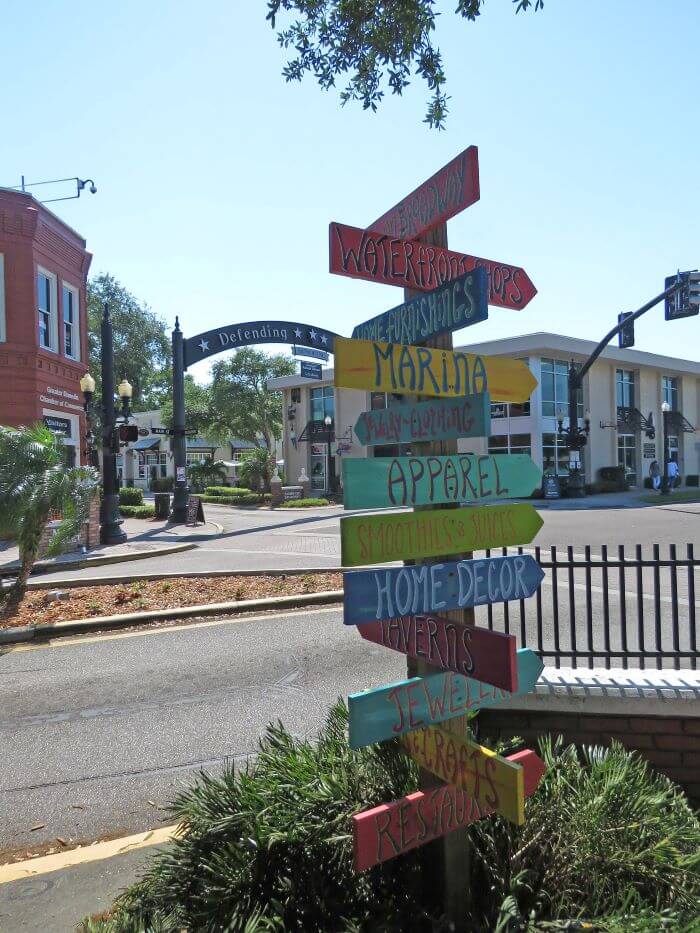 Dunedin has a strict sign ordinance that gives it a clean uncluttered look.

You will find several microbreweries, however, including Dunedin Brewery, the oldest microbrewery in Florida.

The downtown area is very walkable and has that small town charm.  You can park your car and have easy access to shopping, dining, and sightseeing.

There is also a trolley you can catch that will show you not only Dunedin, but Clearwater, Clearwater Beach, Sand Key, Dunedin, Palm Harbor, and Tarpon Springs. 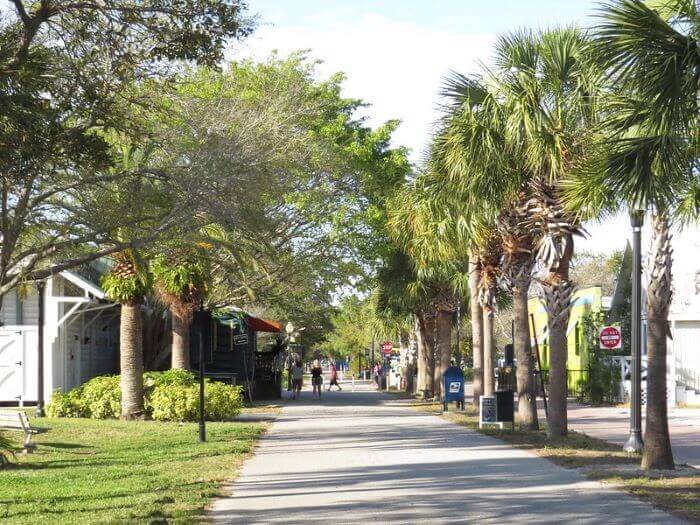 The original Orange Belt Railway bed was abandoned and was converted into what is now the Pinellas Trail.

This is a 39 mile long pedestrian and bicycle trail that runs from Tarpon Springs to St. Petersburg. 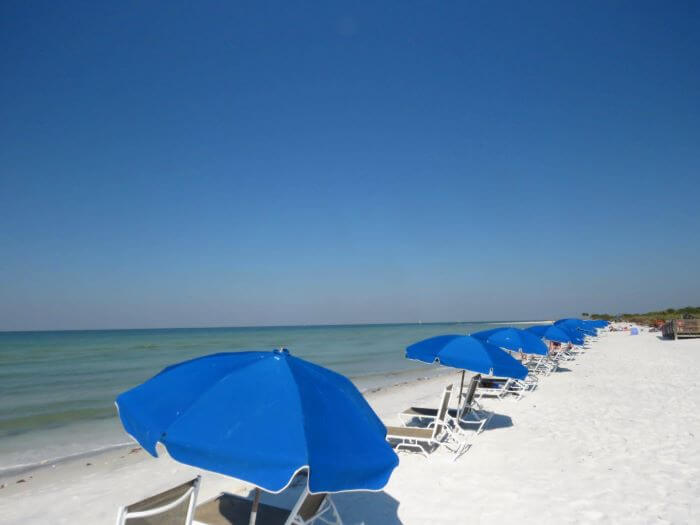 The world-class beaches are an important feature of Dunedin.  There are beautiful beaches along Dunedin Causeway, on Honeymoon Island, and at Caladesi Island State Park.

The recreational activities are almost endless in the area, whether you enjoy a quiet visit to a butterfly garden or visiting a nature center or hiking on a nature trail.

You can enjoy casting your line off a fishing pier, water sports, or soaking up the sun at the clean white sandy beaches.

Dunedin has been the spring training center for the Toronto Blue Jays baseball team since it came into the league.

The first game the Blue Jays ever played was in 1977 when they beat the New York Mets 3-1 in Dunedin. 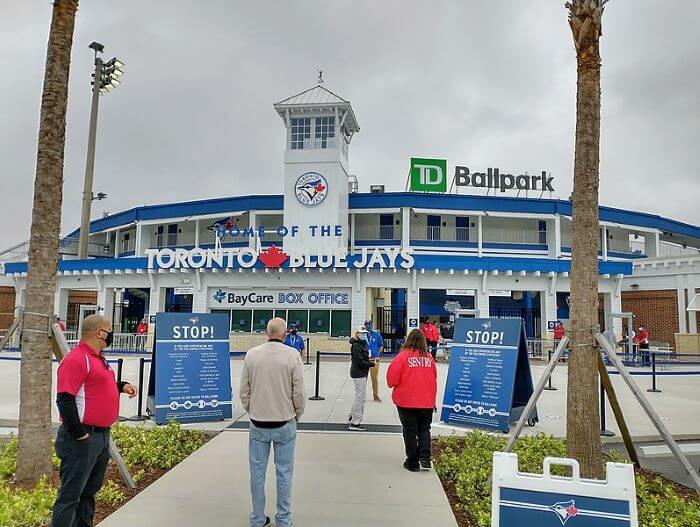 They are the only major league baseball team to train in one place this long.  They train and play in TD Ballpark, a stadium that seats 8,500 people.

The stadium was known as Dunedin Stadium prior to 2019 and is also home to the Dunedin Blue Jays who play year-round on the baseball field.

Dunedin has done a good job of preserving many of its historic homes and buildings. 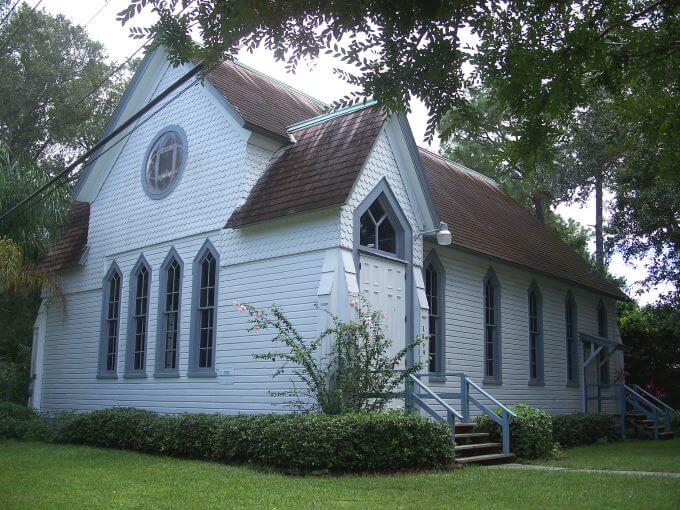 Andrews Memorial Chapel is an example of this effort.

It was originally built in 1888 and moved to its present location at the entrance to Hammock Park in 1970.

After renovation supervised by the Dunedin Historical Society, the building was added to the National Register of Historic Places. 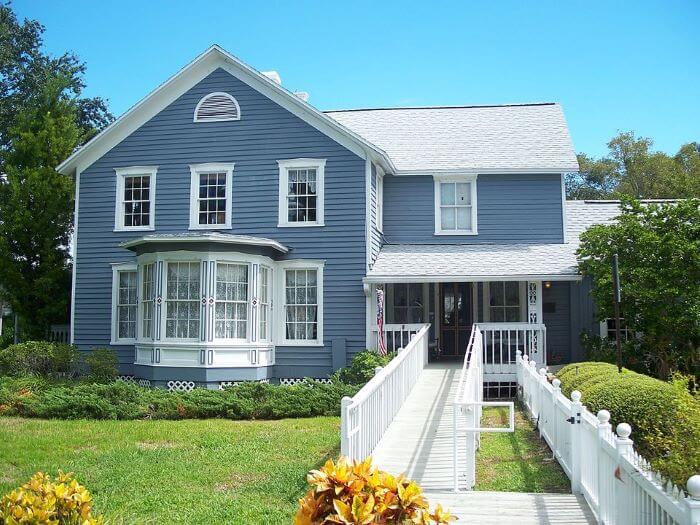 Three other Dunedin locations are on the National Register of Historic Places.

Two of these are residential homes: the Blatchley House at 232 Lee Street, and the J.O. Douglas House at 209 Scotland Street, built in 1880.

The third is Dunedin Isles Golf Club, which was home to the PGA of America from 1945-1962.  Now named Dunedin Golf Club, it's been voted the best golf course in the Tampa Bay area.

ALL ABOUT DUNEDIN, FLORIDA

DUNEDIN THINGS TO DO