Homosassa, Florida things to do, lodging, dining, real estate at end of article.

Homosassa is on the Gulf Coast in Citrus County about 75 miles north of Tampa and 90 miles west northwest of Orlando.

That's a long way from these major cities and is a large part of the charm of this small town of 1,800 people. 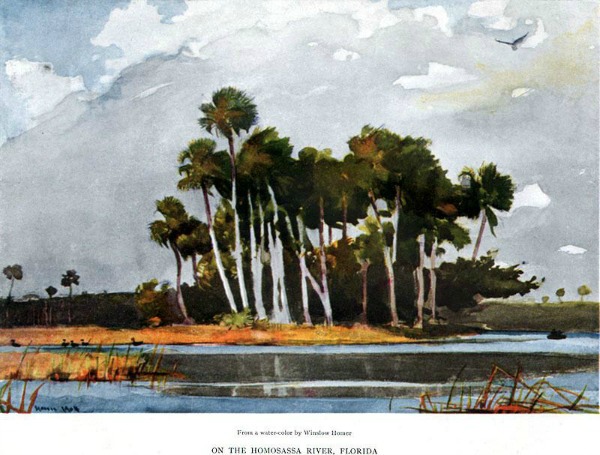 Homosassa has become a popular tourist attraction and is probably the best place in the United States to see and interact with manatees in their natural setting.

Native Americans settled the area more than 2,500 years ago. The Seminoles came to the area much later.

One theory of the name Homosassa is that it is derived from Seminole-Creek words that mean "where the pepper grows."

In 1851 David Levy Yulee built a 5,000 acre sugar plantation on the Homosassa River that was worked by a large number of slaves.

The plantation raised sugar cane, cotton, and citrus.  He built a steam powered mill that produced sugar, molasses, and sugar from 1851 to 1864. 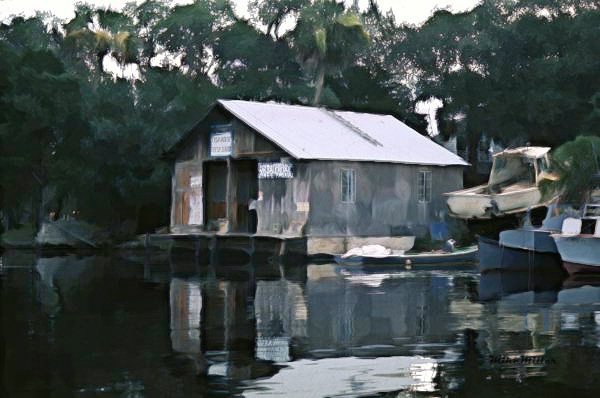 Homosassa Back in the Day

Yulee became a U.S. Senator after Florida achieved statehood in 1845 and was a Confederate Senator during the Civil War. His plantation supplied a lot of sugar to the Confederate Army.

Old Homosassa grew up along the south bank of the Homosassa River and in its early days it's economy relied on commercial fishing and jobs at Yulee's plantation in lumber, citrus and milling.

After the sugar mill closed and the cedar forests had been lumbered out, fishing became the most important industry.

Winslow Homer was a famous American painter who spent winters in Homosassa in the early 1900s.  During his Florida visits, he produced 11 paintings, including the ones above and below. 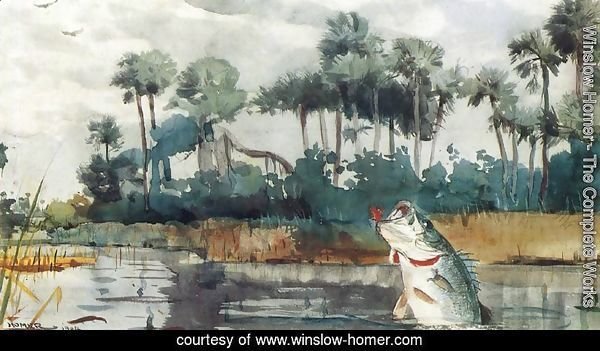 The area along US-19 is known as Homosassa Springs and pretty much looks like any other stretch of Florida highway with strip shopping centers and your typical fast food joints.

To get to the place where things are the way it used to be you need to drive to "Old Homosassa", about three miles west of US-19 on West Yulee Drive through some pristine woods.

You will drive past the Yulee Sugar Mill Ruins Historic State Park and will want to take a look at what remains of a 5,000 acre sugar plantation once owned by David Levy Yulee.

There are still sections along the Homosassa River that haven't changed since Winslow Homer's day more than 100 years ago.

The town of Homosassa is an old Florida village that rests among the swampy bayous near the mouth of the Homosassa River.

The head water of the river is Homosassa Springs, one of Florida's First Magnitude springs located just west of US-19.

The definition of First Magnitude means that the spring discharges at least 100 cubic feet of water per second, or about 64.6 million gallons per day.

All of this fresh water at an average temperature of about 72 degrees is a magnet for manatees.

The "sea cows" can't survive in water below about 60 degrees, and are smart enough to seek out the relatively warmer waters of the Homosassa River and other Florida spring fed streams.

They concentrate in the winter months, but manatees can also be seen year around in this area.

Manatee tours are available at several local businesses including River Safaris.  This business and others also offer Gulf charters for some offshore fishing.

An interesting feature of this park is an underwater observatory where you can get a view of fish and manatees in their natural habitat.

You may also catch a view of one of the area's American alligators. The park also has an orphaned bear cub abandoned by its mother in the wild near Homosassa which has its fair share of black bears.

The visitor center is on US-19 and it's where you can learn all about manatees and take a river tour on a pontoon boat. 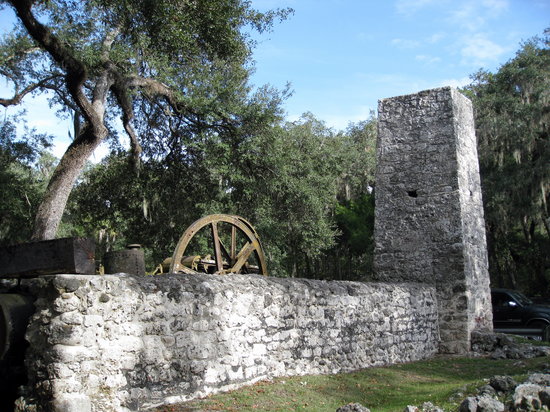 Another popular spot in Homosassa is Halls River, a tributary to the Homosassa River and another favorite hangout for manatees.

There is a neat restaurant and bar named Marguerita Grill located where Hall River joins the Homosassa River.

The Homosassa River is also home to famous Monkey Island, a small island in the river occupied by spider monkeys. 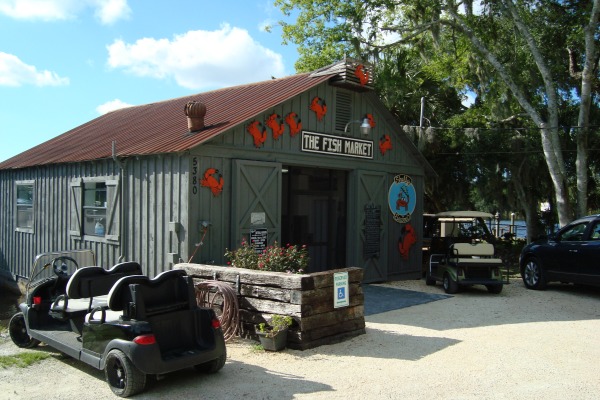 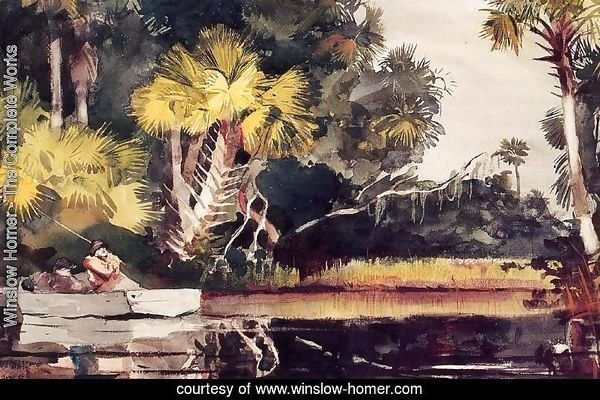 Commercial fishing has been overtaken in modern times by recreational sport fishing.

More tourists and state residents than ever enjoy the waters of the river and Gulf of Mexico and many businesses have grown up to serve their interests.

Some local restaurants will even prepare and cook your own fish that you catch in the river or Gulf. 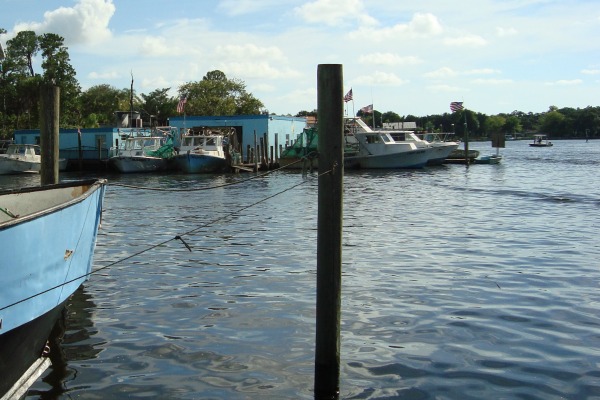 On the Homosassa River

Seafood is a staple in this town and several waterfront restaurants in the area cater to the visitor. Weekends are especially busy in Old Homosassa.

The town is crowded during scalloping season in July, August and September.

The streets and vacant lots in Old Homosassa are jammed with pickup trucks, SUVs and boat trailers during the season.

Parking is hard to find, especially on summer weekends. 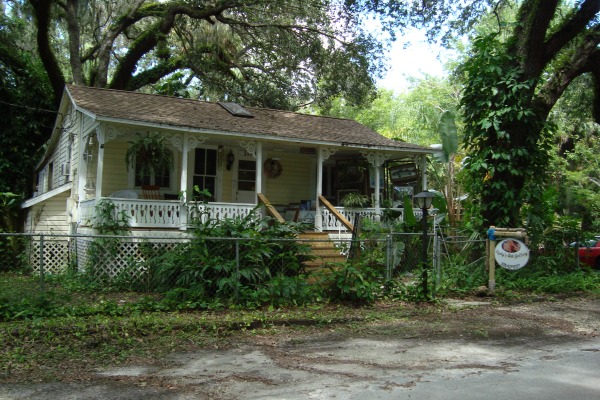 Like many old Florida towns, especially those at the end of the road, the laid back ambiance attracts the artistic soul and the relaxed good old boys.

These folks don't care much for golf or country club life and would rather go fishing or set up an easel and start painting.

The average age of full time residents is 54, quite a bit older than the average in the State. 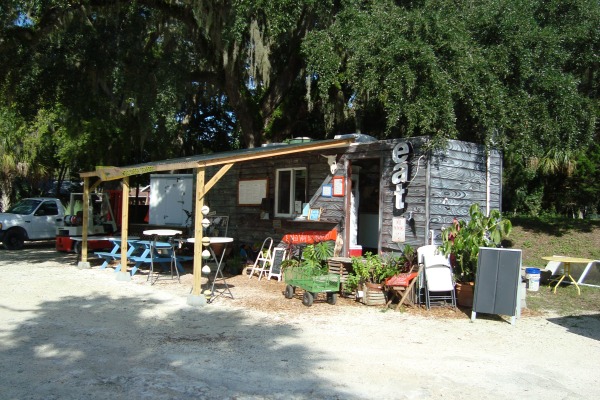 Lots of retired folks make do on very little here in Homosassa, and the variety of houses show it.

You will see house trailers elevated on stilts or concrete blocks and weathered old houses that have been here for a hundred years.

These are mixed in with newer modern houses on the various bayous, creeks, and canals on both sides of the river. 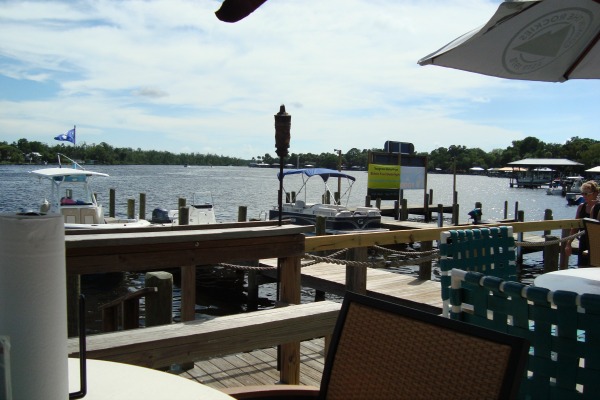 Dining on the Homosassa River

Many Homosassa neighborhoods experience street flooding during the rainy season, and if a hurricane is headed into the area the town usually falls into the mandatory evacuation category.

It would be dangerous to wait too long to escape a storm so it's wise to keep an eye on the weather report and leave when you are told to.

A goog spot to hang out or stay during all seasons is the Homosassa river resort known as Florida Cracker Riverside Resort.

It is directly on the river and features the Florida Cracker Kitchen and Monkey Bar, an outside bar on the river with live music.

Winslow Homer is not the only artist to love capturing Homosassa images.  Bob Kyle is a professional photographer who caught this beautiful view of the fish market. 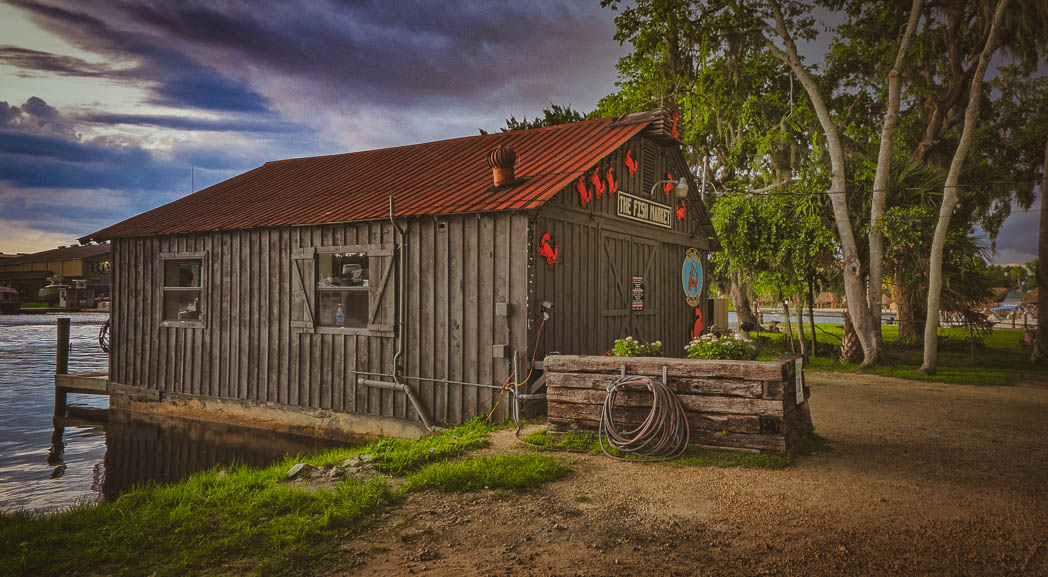 The Fish Market in Homosassa
Photographic Destinations by Bob Kyle

The Museum Cafe is located on the way into Old Homosassa near the entrance to the Yulee Sugar Mill Ruins Historic State Park. 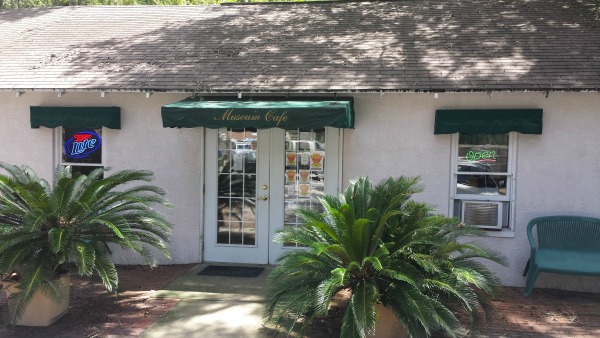 You will see the sign identifying a one story structure on the left side of the road as the Old Mill House Gallery and Printing Museum.

This building in the quiet part of town houses not only the gallery and museum, but a great little restaurant too. When you enter the cafe, it doesn't look at all like a museum.

The museum and galleries are in separate rooms off to the left of the dining area. The restaurant section of the building is bright and cheerful with lots of windows and specializes in lunch items.

READ MORE ABOUT THE MUSEUM CAFE

ALL ABOUT HOMOSASSA, FLORIDA

HOMOSASSA THINGS TO DO