NOTE
Pier 66 resort is undergoing renovation scheduled for completion in 2024.
This article is about memories of the old Pier 66 rooftop lounge.

Pier 66 means different things to people depending on whether they are new to Florida or have been around a few years.

My Pier 66 is a tall hotel with a rotating rooftop lounge on the Intracoastal Waterway in Fort Lauderdale. 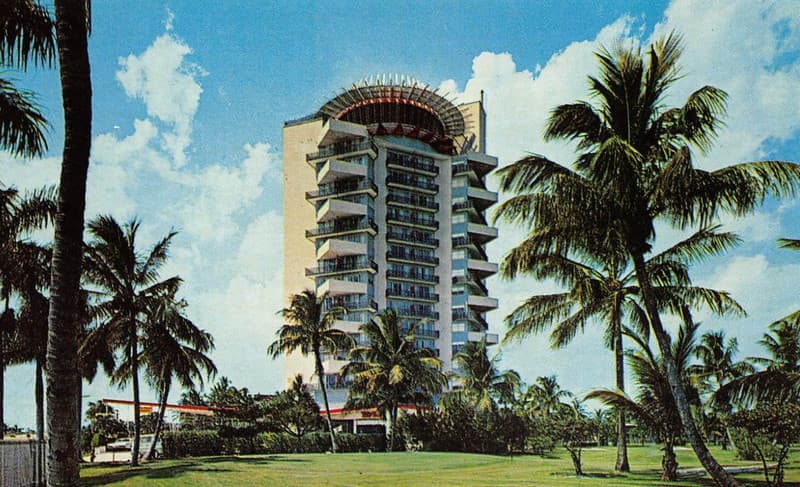 It was built in the 1950's and was originally owned by the Phillips Petroleum Company, the sellers of Phillips 66 gasoline.

To signalize that ownership, there was a Philips 66 gas station in front of the hotel back in the fifties and sixties. 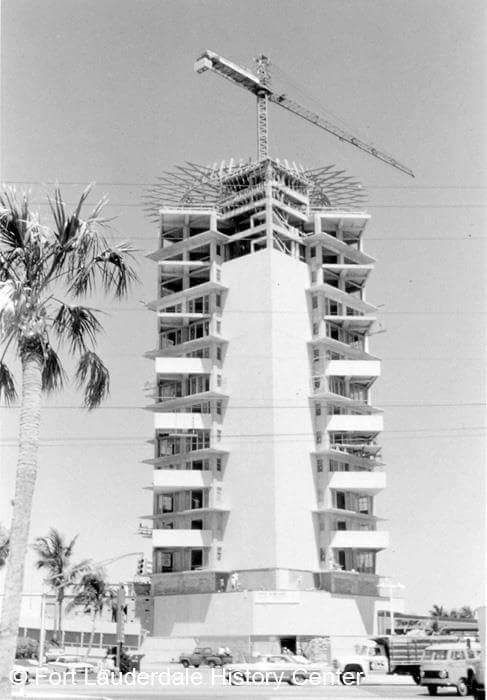 Spectacular views of the Atlantic Ocean, Intracoastal Waterway, Port Everglades and downtown Fort Lauderdale were an outstanding feature of this slowly rotating lounge. 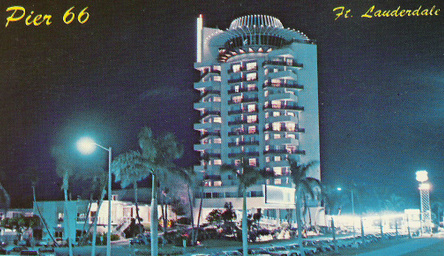 As I recall, the elevator took 33 seconds to rise from the ground to the lounge floor, and 33 seconds to go back down for a total of 66 seconds.

The elevator had a glass side so you could look out at the scenery during the trip to the top and back to the bottom.

The lounge itself rotated once every 66 minutes while you enjoyed your drinks.  In my prime I could enjoy three drinks per rotation. 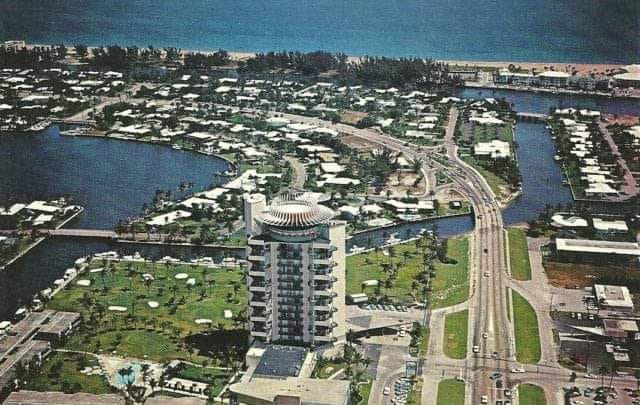 It was important during such periods of libation to memorize where your table was when you left it to go to the restroom.

When you returned, the table would be in a different location.

The last time I visited Top of the Pier was in early 2005. The hotel was then a Hyatt and remodeled for probably the umpteenth time. 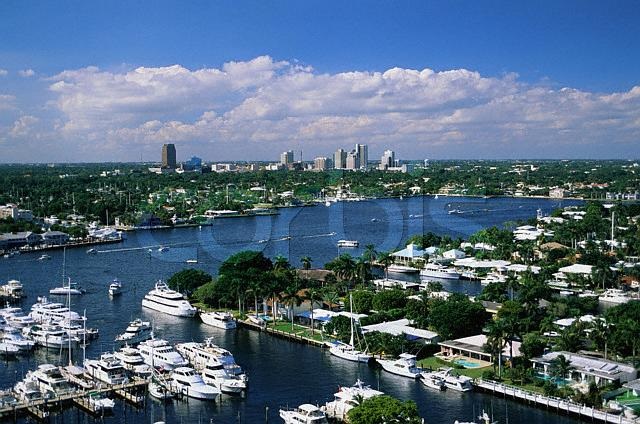 I met a friend for a drink and to enjoy the spectacular sunset as I had done dozens of times before.

As the sun descended below the horizon, the lights of Port Everglades and downtown Fort Lauderdale were twinkling decorations on a golden backdrop of green palms and blue canals.

The following month I was in Fort Lauderdale and went into the hotel for my habitual trip to the Top Of The Pier.

I learned that it had been closed to the public and to hotel guests. It was only available for private parties. 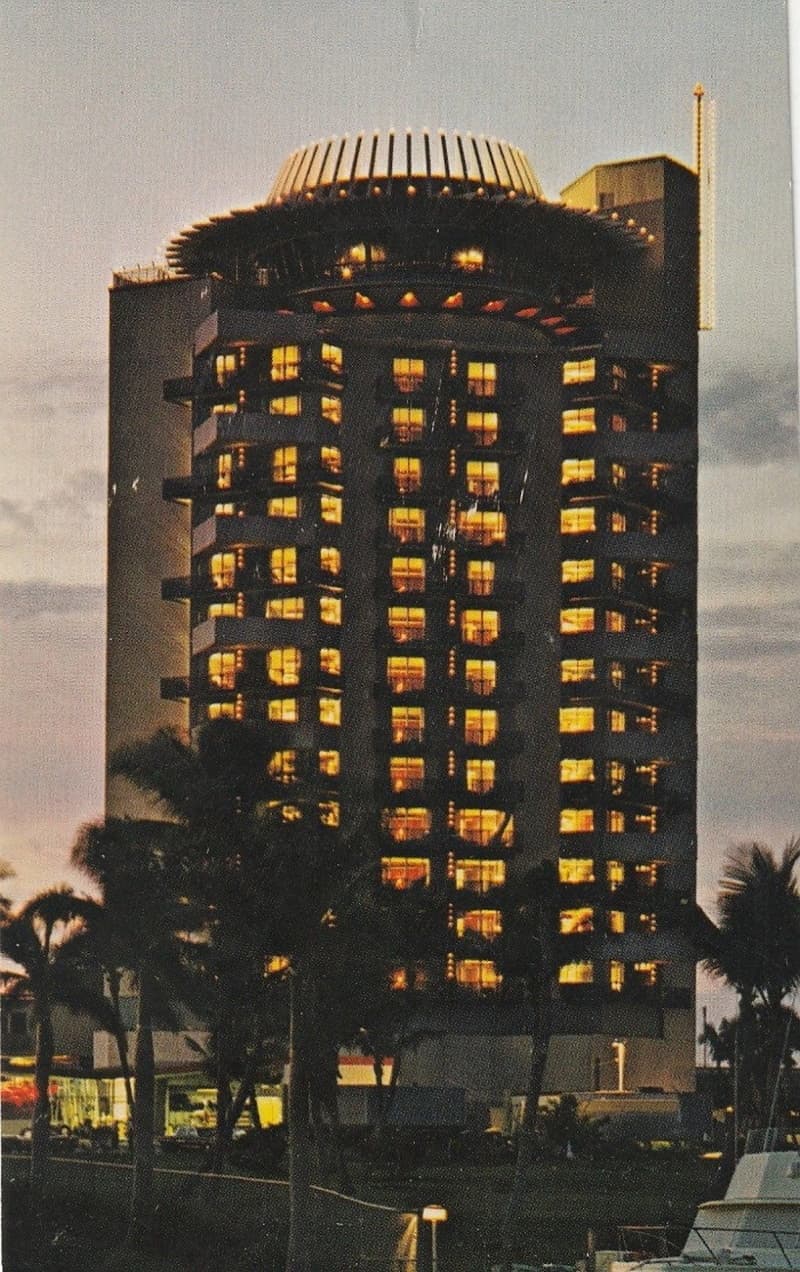 Another chapter in Old Florida that is sadly closed.

I think if one follows the money, there were probably too many tourists and sightseers using the lounge without having a drink or a snack.

Not enough of us 3 drink per rotation types to make it work economically.

My life as a Floridian started at the Pier 66 marina in the summer of 1966 after my parents moved us from Northern Illinois to Fort Lauderdale.

A 15 yr old living on a boat at the Pier was a dream come true. I had full access to the two pools, the coffee shops, and much to the dismay of hotel security Mr. Allen, the run of the grounds.

Back in 1966 a 43' boat was pretty nice. Now it would hardly qualify as a tender to the mega-yachts.

We were there for 3 months during the off-season when dockage cost 8 cents per foot per day and that included phone through the hotel operator, water, trash, electric, and the morning Miami Herald!

All that for $103 a month!! There were a few other kids there too, but as the school year started we moved to an apartment on a canal and we lost contact.

I attended a Statewide Food Stamp Conference in Ft. Lauderdale in 1988. My one and only time as a young 34-year-old Supervisor enjoying a night out with others watching the sunset and later the lights of the city come to life.

So glad I had this amazing experience as a public servant of our great State of Florida. I was hoping to revisit with my son and his family. So sad that it is not open to the public.

In March of 1985 I was married on a yacht at the marina. It was a small wedding so we all went upstairs to drink and admire the view. Then my husband and I spent our wedding night in a beautiful hotel room.

Although we're not married anymore, it's still a great memory.

My first and only trip to Pier 66 was in 1976. It was my family’s first family vacation and my uncle insisted we go to the top floor.

It was beautiful! I will never forget the view. I still have the glass that we got our drinks in.

This is a great landmark. What is the current hotel that has now taken the place of the Phillips 66 property? Is there actually a hotel today in 2019?

It is still a hotel called Pier 66 Hotel and Marina. I don't know if it is affiliated with a larger chain; it may be independently owned and operated.

My father worked for Phillips & we went to Pier 66 every summer in the 1960's. It was & still is one of my favorite hotels. I miss the revolving restaurant, but the rest of it is still great!

My dad worked there for 20 yrs.

My first job was scraping barnacles from the pilings in the marina at Pier 66 in 1968.

We lived on Lake Sylvia as kids back in the 60's. My brother got a telescope for his birthday, and he discovered that he could see Pier 66 - clearly. So, one afternoon, he was watching the top go around, and saw someone on the revolving points of the tower. They swan dived into the putting green below, that was the last time he ever used his telescope.

My father's cousin Bette was the head telephone operator for many years...she was the voice you spoke to when you'd call the hotel.

Prior to the tower being constructed, there was a large time and temperature sign out front(I'll never forget the morning I drove by and the temperature registered 29 degrees). Just to the east of the main entrance was a par 3 golf course and the tennis courts.

My dad began working for Pier 66 when it opened. He was accounting manager (I think that was his title). We spent hurricane Betsy hunkered down there. I spent many hours in that hotel and remember so many wonderful things about it. Thanks for this article.

Thanks, Glenda. That must have been something to ride out a Hurricane at Pier 66. I just checked my history and Hurricane Betsy was in 1965. We were living in a shack at the University of Florida back then and had to evacuate to an approved shelter.

It's good to hear they are open for brunch on Sunday. I thought they were totally closed to the public and only available for private parties. I think I will make the trip over there soon one Sunday.

I just called them since I have out of town guests and they only open for brunch on sundays and for private events. Sorry.

Does anybody know if the top of Pier 66 is still closed to the public?

As this post was written in June 2020, we know that Tavistock Development Corporation is in the process of renovating the entire Pier 66 complex.  Renovations are expected to be complete in 2022.