Tim Dorsey was born in 1961 and is alive and well and living in Tampa, Florida.  He is one of our funniest and most popular Florida authors. 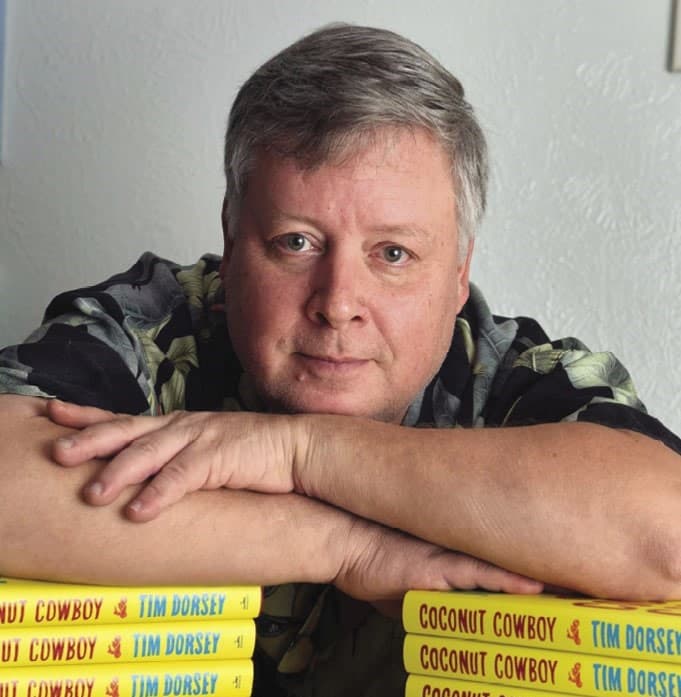 Tim was born in Indiana, but his family moved to Riviera Beach, Florida when he was one year old.

Like many Florida authors, Tim got his start in the newspaper business.

He graduated from Auburn University in 1983, and was editor of the student newspaper, "The Plainsman".

From 1983 to 1987, he was a police and courts reporter for The Alabama Journal, an evening paper in Montgomery that is no longer in business.

He joined The Tampa Tribune in 1987 as a general assignment reporter. He also worked as a political reporter in the Tribune’s Tallahassee bureau and a copy desk editor.

Since "retiring" from the newspaper business, Tim Dorsey has written many novels, all with Florida settings. He is well known among Florida authors.

Tim is one of the genre of Florida authors like Carl Hiaasen and Dave Barry who take Florida's craziness and make it even crazier.

Serge Storms is the Main Character in Most Tim Dorsey Novels

Serge has several psychological illnesses that make him an obsessive psychopathic homicidal serial killer. He takes medications for these illnesses, and they seem to work.

Sometimes, however, he stops taking the drugs because he hates the side effects.

But like many other great Florida fictional characters (Travis McGee and Doc Ford come to mind) Serge has a very strong sense of what is right and what is wrong.

His serial killings always involve villains who have done bad things. You might even say they deserve to die. Serge is very creative in his ways of killing these villains.

As an example, he killed a mugger by making him swallow bullets, then putting him in an MRI machine. The police could not figure out a dead man with a body full of exit wounds and no entry wounds.

Another fun thing about Serge and Coleman is their wanderings around Florida. Serge loves all things Florida, and enjoys visiting historic Florida sites. He collects Florida memorabilia.

Dorsey’s books are always politically incorrect, for which his readers are thankful.

Here is a list of Tim Dorsey's books set in Florida:

Governor Kirk was one of Florida's all-time authentic characters. He was the first Republican governor elected in the history of Florida since Reconstruction after the Civil War.

Known to fans and detractors alike as "Claudius Maximus", he served from 1967-1971 with never a dull moment.

Back then the Florida legislature was overwhelmingly controlled by Democrats from the good old boy network called "The Pork Chop Gang" for their ability to bring home the pork to their districts.

These old Florida Cracker politicians hated Claude and opposed everything he tried. He didn't do them any favors either.

In "Nuclear Jellyfish", Serge and Coleman give the former governor a ride back from a speaking engagement.

Serge is telling Coleman all about the governor, and relates this story:

“Coleman,” said Serge. “You’ll love this. A few years back, the governor was being questioned on the witness stand in some court case by F. Lee Bailey, who asked Kirk to identify himself, and state for the record what he used to do. And he said he was a former governor of Florida.

And Bailey asked what he was now, and Kirk said, ‘A has-been just like you.’”

The governor laughed. “That really pissed them off.”

This is where truth is stranger than fiction, because I remember reading about that Claude Kirk incident in the newspapers here in Florida when it happened.

Watch this video of Lucky being interviewed about meeting Tim Dorsey.