Zora Neale Hurston was born in 1891 in Alabama and died in Fort Pierce, Florida in 1960.  Her story has always touched me because I moved to Florida the same year that Ms. Hurston died. 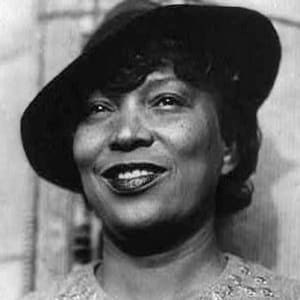 She was a black author, and Florida was very much a southern state. In recent decades she has been recognized as one of the greatest Florida authors.

Blacks were not treated equally under the law in those days. She didn't enjoy any financial success during her lifetime.

Though born in Alabama, she was still a baby when her family moved to Eatonville, Florida. Zora always considered Eatonville her only home.

Eatonville is a small town on the northern edge of Orlando. It was founded in 1887 and was America's first incorporated black town. 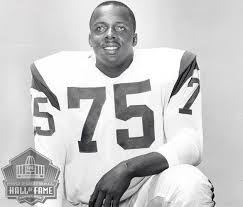 In addition to Zora, another famous Eatonville native is Deacon Jones, former NFL great for the Los Angeles Rams who is now in the Pro Football Hall of Fame.

Eatonville was good for Zora. She was surrounded by black people achieving good things in life. Her father was a preacher, and an important citizen in Eatonville.

By all accounts, Zora had a happy childhood until she was about 13. That was when her mother died, and her father quickly married a younger woman. Zora and her new stepmother were always at each others throats.

Zora wandered around for years working in menial jobs, and finally turned up in Baltimore working as a maid. She was 26 years old, and still hadn't finished high school.

She decided to go back to high school, and lied about her age. She said she was 16 so she could attend the public school. For the rest of her life she said she was 10 years younger than she actually was.

Zora finished high school in Baltimore, and finally went on to graduate from Barnard College in 1928. She was really 37 when she graduated, but her friends all believed she was 27.

She was active in the "Harlem Renaissance" of the 1920's, a period of time in which black artists, writers and actors were beginning to be recognized. Her friends included poet Langston Hughes, actress Ethel Waters, and writer Sterling Brown.

By 1935 Zora had published several short stories and a novel titled "Jonah's Gourd Vine". She had also published a popular collecton of black southern folklore called "Mules And Men".

What many consider her masterpiece, "Their Eyes Were Watching God", was published in 1937.

In 1942 she published her autobiography, "Dust Tracks On A Road", and became famous at last. She was written up in Who's Who In America and other reference works. At last she was recognized as one of the most important Florida authors.

She never made much money in all of the years of her literary success. America was not kind in those days to black authors, especially Florida authors, and to make things worse most of her career was during the Great Depression.

She worked for a time as a librarian at Patrick Air Force Base near Cocoa Beach, but got fired. She lived in the Eau Gallie area of Melbourne in those days.

After her stint at Patrick, she worked as a maid in Fort Pierce, Florida, towards the end of her life. She died in 1960, at age 69, after suffering a stroke. Her Fort Pierce neighbors took up a collection for her funeral. The collection didn't raise enough to buy a headstone, so Zora was buried in an unmarked grave. 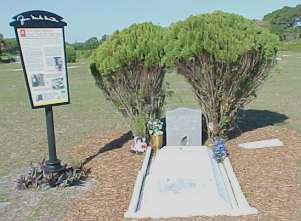 The grave remained unmarked until 1973.

In the summer of 1973 a young writer named Alice Walker traveled to Fort Pierce to place a marker on the grave of the author who had been an inspiration for her own writing.

Walker found the Garden of Heavenly Rest, a blacks-only cemetery at the dead end of North 17th Street, abandoned and overgrown with weeds. Walker had a gray headstone installed.

"Zora Neale Hurston: A Genius of the South".

Alice later wrote "The Color Purple", for which she won the Pulitzer Prize for Fiction. She has also been instrumental in bringing Zora Neale Hurston back into the public awareness and establishing her reputation as one of the greatest Florida authors.

Here is a listing of some of Zora Neale Hurston's fiction:

In addition to her novels and short stories, she wrote several plays as well.

Some of her provocative articles include: "How It Feels to be Colored Me" in The World Tomorrow, "The 'Pet Negro' Syndrome" in the American Mercury, "My Most Humiliating Jim Crow Experience" in the Negro Digest, "Conscience of the Court" and "What White Publishers Won't Print", both in the Saturday Evening Post.