Floral City, about 70 miles north of Tampa, has been the home of Ferris Groves since 1931.

It is a quiet place located on US Highway 41 and has a population of about 5,400.  It is south of Inverness on Lake Tsala Apopka. 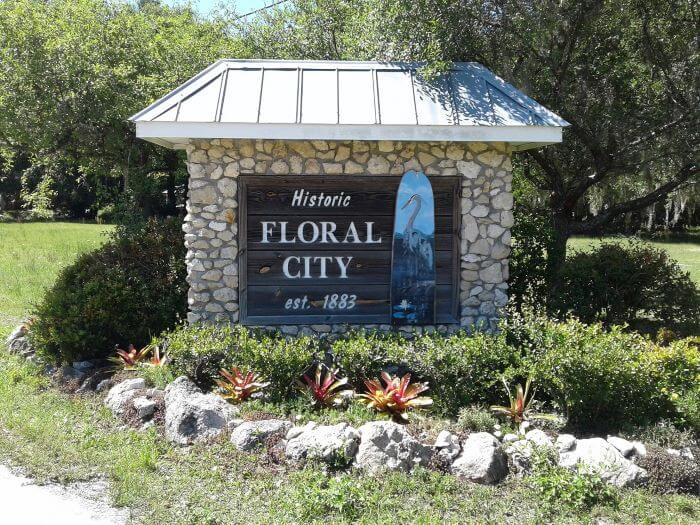 Like most places in Florida, the Native Americans were here first.

The Seminoles built a village in the early 1800s near Floral City and named it Cho-illy-hadjo.  The name apparently translates to "Crazy Deer's Foot."

There must be another story there.

According to Allen Morris in "Florida Place Names", a man from Vermont came down to the area in the 1870s searching for orchids and other rare flowers.

He must have had some luck because at that time the area was known as "Cove Bend" and soon got changed to "Floral Cove" and finally Floral City.

One of the earliest settlers was James Baker, whose father-in-law was a former Conderate soldier, John Paul Formy-Duval.

The town was platted in 1883 from their land.  The town grew because of nearby phosphate deposits that spawned a productive mining industry.

Some time around World War One the mines were played out and the town stopped growing for awhile.

Like almost everybody else in Florida back then, he went bust after the major hurricanes of the late 1920s and the Great Depression. 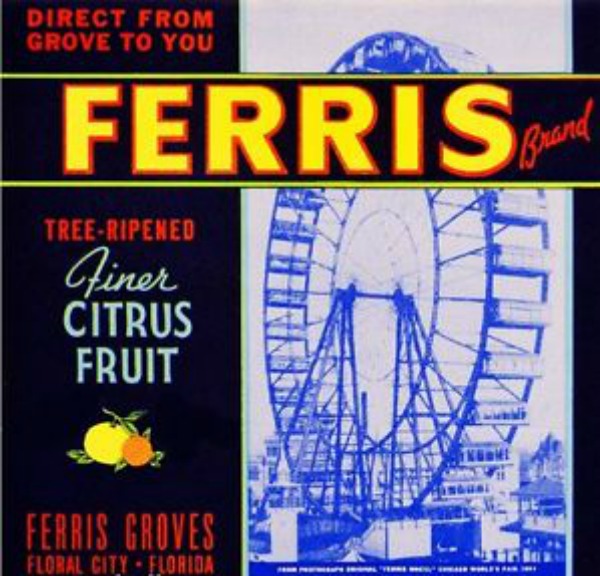 He owned a lot of land in Floral City, including Duval Island on Lake Tsala Apopka.

Instead of developing the golf course he had planned, he planted citrus trees on the rich soil of the island.

At the peak of his operation he had 350 acres planted with 31,000 trees. Almost everyone in Floral City worked for Doc Ferris. 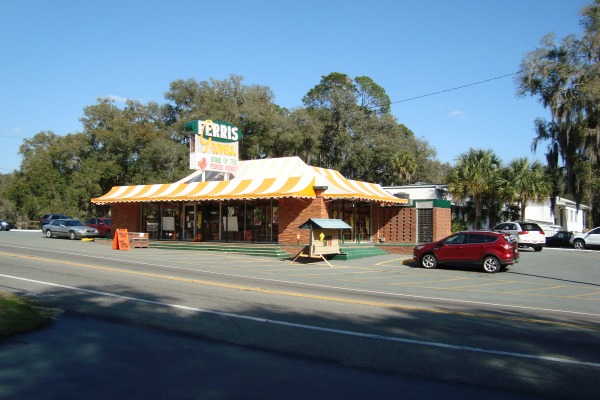 Doc was reportedly the grand nephew of George Washington Gale Ferris, Jr., the inventor of the Ferris Wheel.

Ever the promoter, Doc added a picture of the Ferris Wheel on some of his early citrus box posters.

He also built fruit stands along many major Florida highways and even had fruit stands in some of the tourist hotels in Miami Beach.

Among those early Ferris stores was the current one on U.S.-41 in Floral City that still does a great business. I bought some great tangerines there recently.

Most of Central Florida's citrus industry was wiped out in the freezes of 1983 and 1985 and changed this part of Florida forever.

An exception was the fertile hammock soil of Duval Island which still produces Valencia oranges, Ruby Red Grapefruit and Fall Glow tangerines in its 24 acre grove.

In recent years they have added strawberries and blueberries.

Their delicious strawberry is named the Ferris Berry. 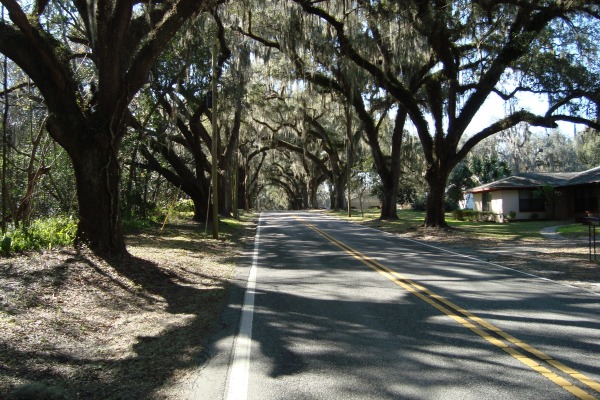 Fruit bearing trees are not the only hallmark of Floral City.

This small community has done a good job in preserving the old oaks and native palms that give the town so much of its current day charm.

It's a good place to park your car and just walk or ride your bicycle.

There is a pioneer museum downtown and a couple of neat art galleries and antique shops along with a produce stand.

The neighborhoods surrounding downtown are a treasure trove of authentic old Florida houses and other buildings. 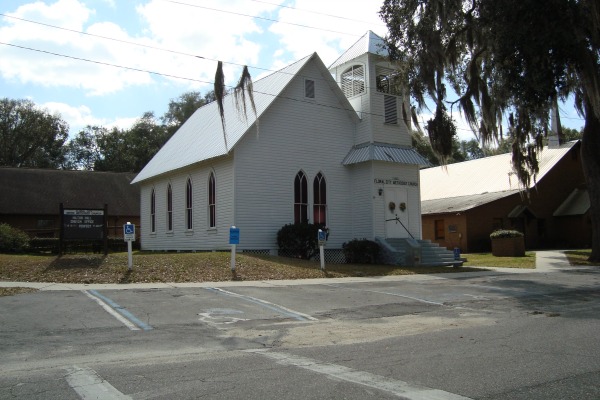 The Withlacoochee State Trail is a 46 mile long paved corridor that runs through Floral City.

It's a "Rails To Trail" project that was formerly a historic train route that was sold to the state in 1989.

Its northern end is in Dunnellon, and its southern terminus is the Trilby trailhead southeast of Brooksville.

It is for hikers and non-motorized vehicles only, and runs through small towns like Istachatta, Floral City and Inverness.

Along the way it crosses several ranches, natural woodlands and wetlands and is close to Fort Cooper State Park and The Withlacoochee State Forest. 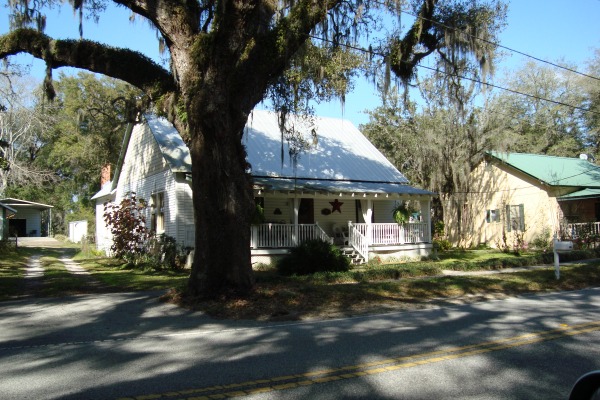 Floral City is set up to cater to hungry and thirsty cyclists with several restaurants and stores near the trail's crossing in downtown.

There is also a bike shop that provides not only bicycles but repairs and advice.

The community is built along the shorelines of Lake Tsala Apopka and Bradley Lake.

There are many fish camps and authentic old Florida lodging places in the area along with some great fishing and canoeing.

Some of the back country roads around these lakes and their many islands offer some of the best driving experiences in Florida.

Here is a Shannon Burns video discussing the Floral City area with a knowledgeable local historian. 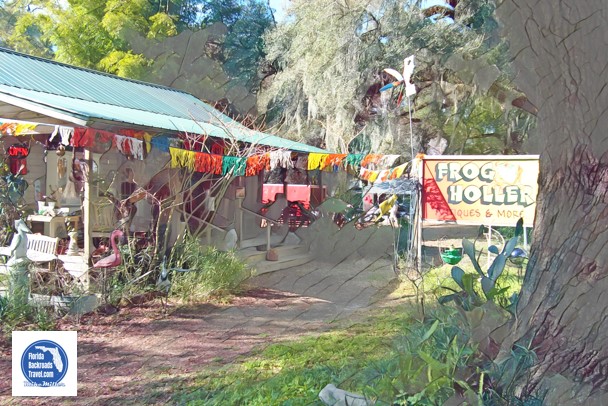 Frog Holler is a quaint gift shop on the west side of US41 in Floral City. 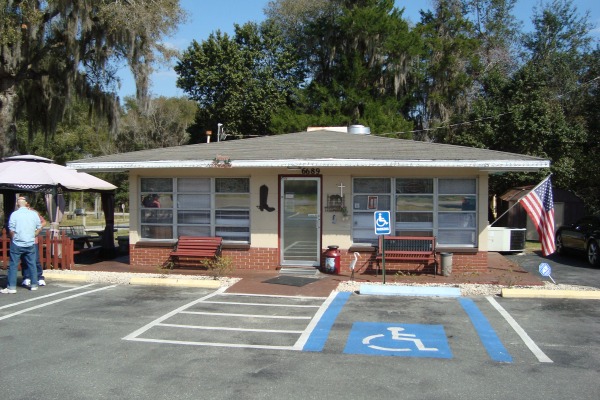 Robin's Country Kitchen is in a plain building on U.S.-41 on the north side of Floral City.

There is plenty of parking for cars and motorcycles and the bicycles don't have a problem either.

Lunch on weekends can be busy because of the large number of people who use the trail. It was busy when I dropped in, with plenty of cars, motorcycles and bicycles adorning the parking lot.

It was so crowded inside the restaurant and out on the patio that I was a little nervous about how long it would take to get my lunch.

I settled into the one remaining seat at the counter and soon realized I need not have worried. I drank my great cup of coffee and watched the owner and server handle everything extremely well.

It was obvious they were shorthanded that day, but the kitchen staff cranked out the food in short order and the server got it to the customers at once. 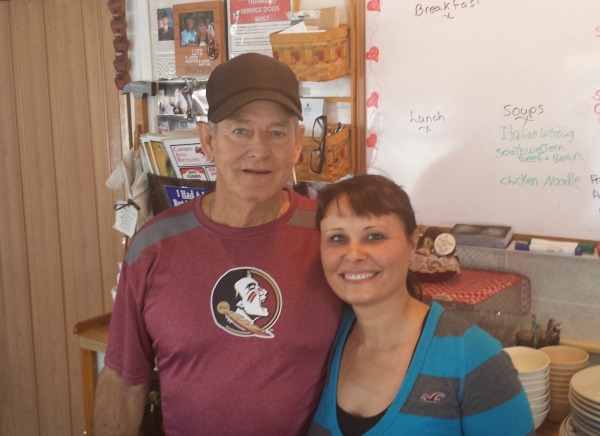 The inside of Robin's is not fancy, but it is clean and comfortable. It was obvious that a lot of the customers were regulars and represented all ages and types.

I had breakfast on my mind, but remember seeing various other items on the small menu and daily special board.

I had three eggs over easy, sausage patties, tater tots and silver dollar pancakes with plenty of butter and syrup, washed down with good coffee.

It was delicious and reminded me of how much I like a heart healthy breakfast.

Robin's is owned by a Mom and Pop couple, Robin and Robert.

Robin was out the day I came in and everything was handled by Robert and his very capable server, Stacy, shown in the photo above.

ALL ABOUT FLORAL CITY, FLORIDA

FLORAL CITY THINGS TO DO