This beautiful park has ocean side camping in a historic setting, and plenty of things to do and see in the fort and nearby Fernandina and Amelia Island.

The United States started building the fort in 1847 at the end of the Second Seminole War.  The fort is shaped like a pentagon and has inner and outer walls and interior courtyards with barracks.

The fort was named in honor of General Duncan Lamont Clinch when he died in 1849.  General Clinch was a veteran of the War of 1812, and the First and Second Seminole Wars.

The fort itself is in good shape, and you will see rangers dressed in Union Army uniforms replicating the soldiers who held the fort during the American Civil War.

When you visit the fort you will see magnificent views of Cumberland Sound to the north, and the nearby forests and beaches that make this park a great place to visit and stay for awhile.

No battles were ever fought here, but it was occupied by soldiers during the Civil War and the Spanish American war.  The Confederates captured it briefly early in the U.S. Civil War.

In the Great Depression of the 1930's, the Civilian Conservation Corps went to work restoring and rebuilding much of the empty old fort.  Daily tours are conducted with the period uniformed re-enactors available for you to chat with.

The park is large, containing 1100 acres, and its beautiful wide sand beach on the Atlantic Ocean is one of its major attractions.  It is one of the "Best Beaches In Florida" listed by several sources.

There is also a fishing pier at the beach, and a full facility camping area for those who want to stay awhile.

For more information about the park, please call 904-277-7274. Campsite reservations can be made through ReserveAmerica.com. 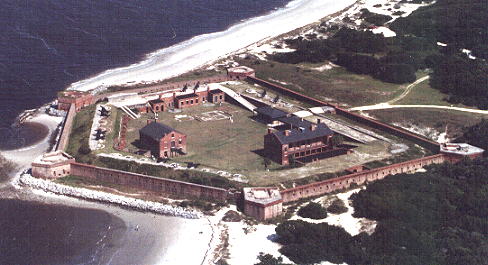 Nearby Towns Worth a Visit

Take I–95 to the Fernandina Beach/Callahan exit (Milepost Exit 373 - Old Exit 129), and stay to the right. You will then be traveling east on A1A. (This road becomes 8th Street within the town limits of Fernandina.) Stay on this road, (A1A), for 16 miles until you come to the intersection of 8th Street and Atlantic Avenue. Turn right on Atlantic Avenue and go about two miles, the park will be on the left.