The story of modern Palm Beach begins with Henry Morrison Flagler.  Along with John D. Rockefeller, he was one of the founders of Standard Oil Company.

But before modern times, the area was inhabited by Native Americans. 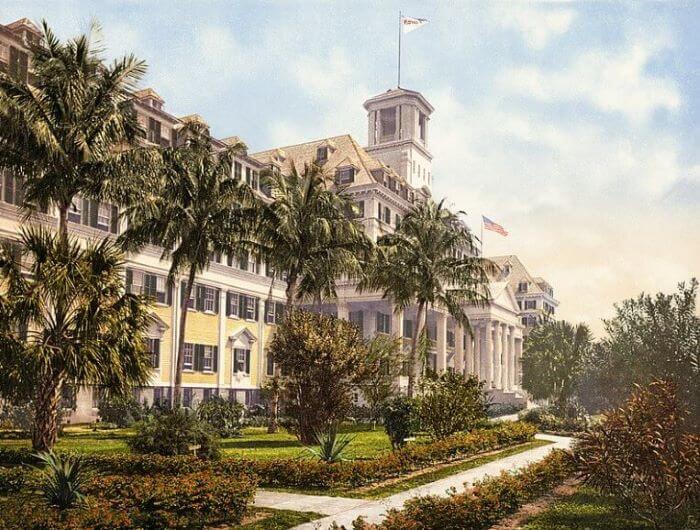 The Jaega were a tribe of who lived on the island that is now Palm Beach at least 3,000 years ago.

Like other original Florida tribes, they disappeared from the area after the long ownership of Florida by Spain and England.

The first white settlers began moving to the island in 1872.  The sparsely populated island saw its first exciting event in 1878.

That the year a ship, the Providencia, was wrecked off the coast with a cargo of 20,000 Trinidadian coconuts. 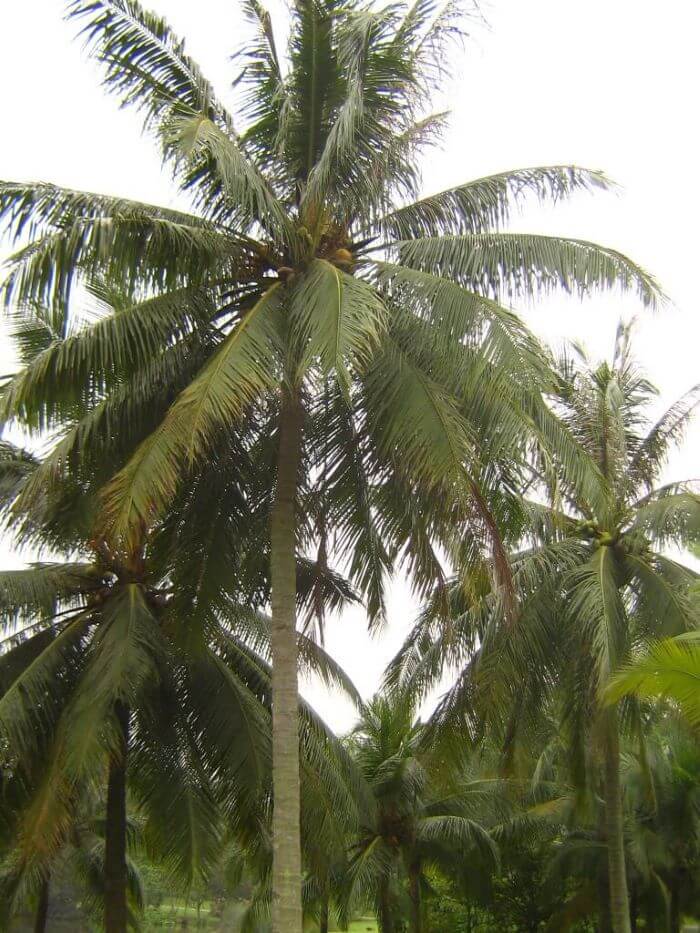 The settlers  salvaged them.  After eating a bunch of them they planted the others all along the coast.

The coconut palms are not native Florida palm trees, but they thrived along this coast, and still do today.

The first hotel in the area was built in 1880 when "Cap" Dimick converted his home into the Cocoanut Grove House.

It was a pioneering venture known at the time as the only coastal hotel between Titusville and Key West. 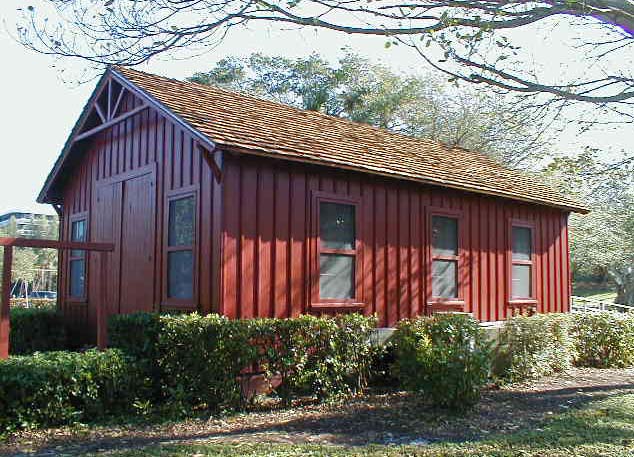 The first school opened in Palm Beach in 1886.  It was known as the "Little Red School House."

Even though it went out of use as a school in 1901, it was renovated by the Gardener's Society of Palm Beach in 1960 and moved to Phipps Ocean Park..

Along with John D. Rockefeller, he was one of the founders of Standard Oil Company.

He retired from that business and become probably the most significant developer in Florida history. 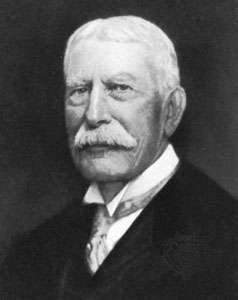 After leaving Standard Oil, Flagler visited St. Augustine with his wife in 1881.  He loved the climate and the charm of the ancient city, but felt it needed better lodging and transportation.

He had the 540 room Ponce de Leon Hotel designed and built and it began hosting guests in January 1888.

The success of this venture led Flagler to begin purchasing short line railroads and to begin expanding his Florida East Coast Railway down Florida's Atlantic Coast.

The first hotel he built in Palm Beach was the 1,100 room Royal Poinciana Hotel on the shore of Lake Worth.

When completed it was the largest wooden structure in the entire world.

By 1894 he had extended the railroad all the way south to what is now West Palm Beach. 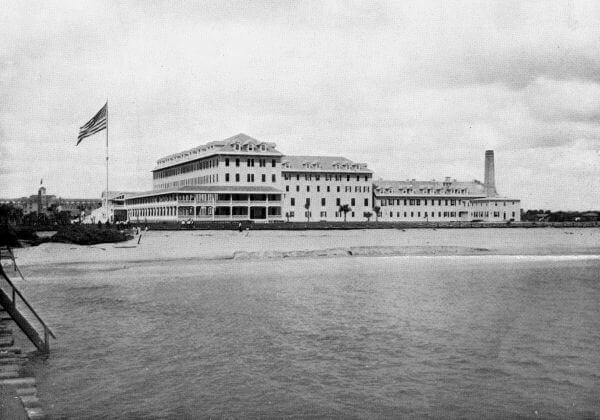 The next hotel he built was the Palm Beach Inn, which was renamed The Breakers in 1901. 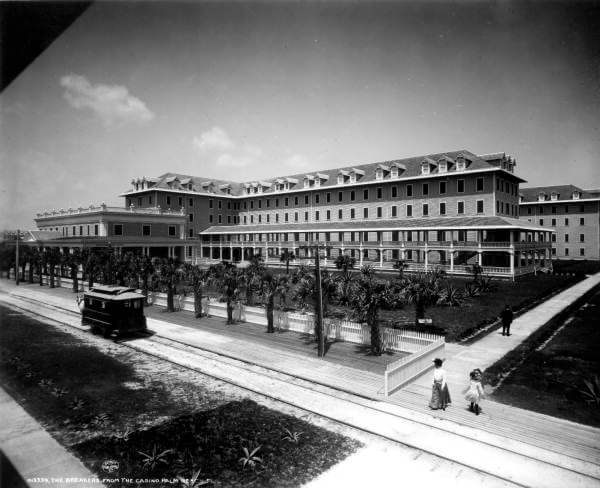 This hotel was on the beach overlooking the Atlantic. 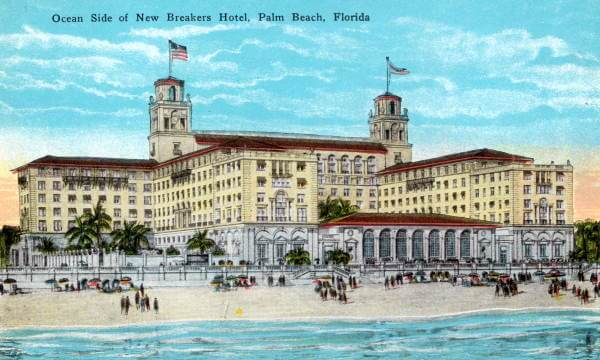 There was a community of black residents in Palm Beach who lived in a settlement named Styx, after the legendary name for the mythological river to hell.

Many of them became construction workers on the hotels that would be built in the future.  Styx was in all regards a slum. 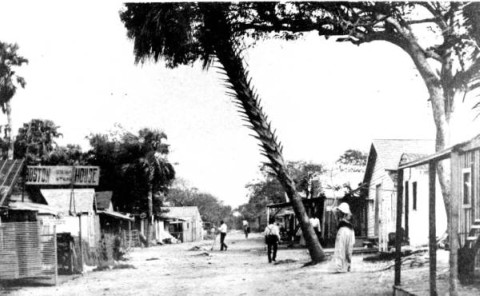 Flagler wanted Palm Beach to be an exclusive retreat for the very wealthy.

He needed a place for the construction workers and hotel staff to live, so he created West Palm Beach across Lake Worth.

Palm Beach was incorporated as a town in 1911. Most residents of Styx were relocated to West Palm Beach by 1906 and the place was totally gone by 1912.

The circumstances of their relocation and the demolition of Styx are shrouded in mystery and have several different versions. 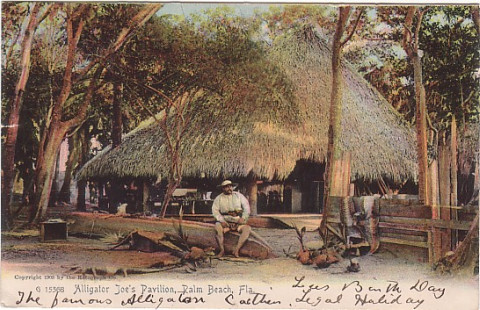 One of the first tourist attractions in Palm Beach was a facility owned by "Alligator Joe", the nickname for Warren Frazee.

He was a large man who entertained hotel guests with exhibits of live alligators, crocodiles, and manatees. 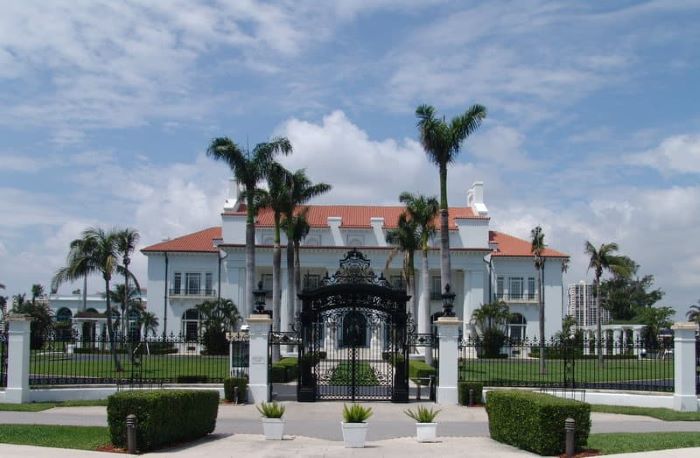 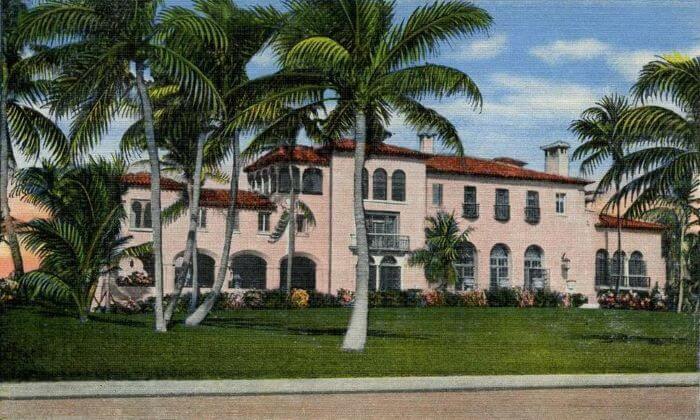 Some of the wealthiest people in the world began to stay at the hotels and build huge winter homes.

One of the first of these was Edward T. Stotesbury, who along with his wife Eva, had Addison Mizner build a mansion they named El Mirasol in 1919.

The estate stretched from the Atlantic Ocean to Lake Worth and was the scene of many fabulous parties for the rich and famous.

It was one the first large buildings in the Mediterranean Revival style that caught on and still defines Palm Beach to this day.

Other extremely wealthy people began to build mansions and the social scene got larger as the years went by.

Among other Palm Beach structures designed by Addison Mizner are the Everglades Club done in collaboration with Paris Singer, and Via Mizner, a section of Worth Avenue. 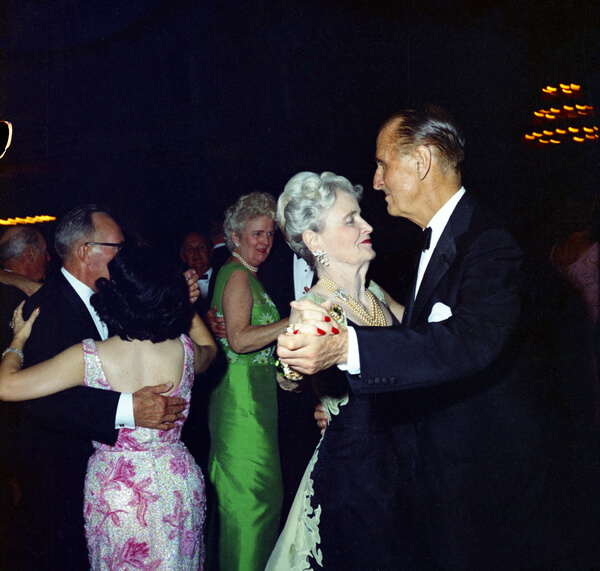 For years one of the most famous Palm Beach socialites was Marjorie Merriweather Post.

She was the daughter of cereal tycoon C. S. Post and at age 27 inherited the Postum Cereal Company.

She was regarded at that time as the wealthiest woman in the United States. 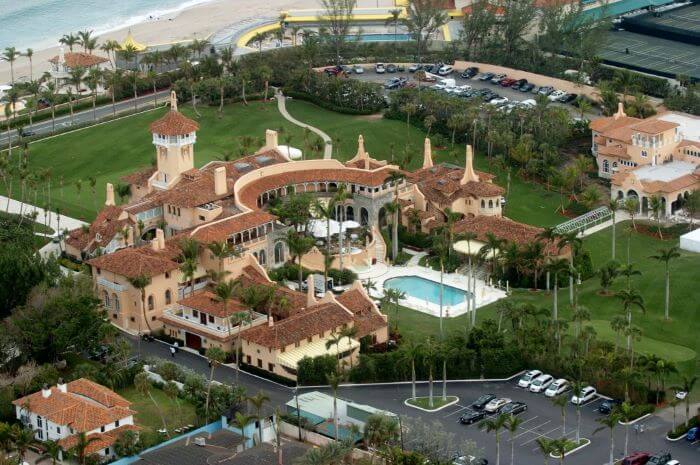 The 126 room, 110,000 square foot mansion became the scene of hundreds of social gatherings during her years in Palm Beach.

Future U.S. President Donald Trump bought Mar-a-Lago and converted it to a club. 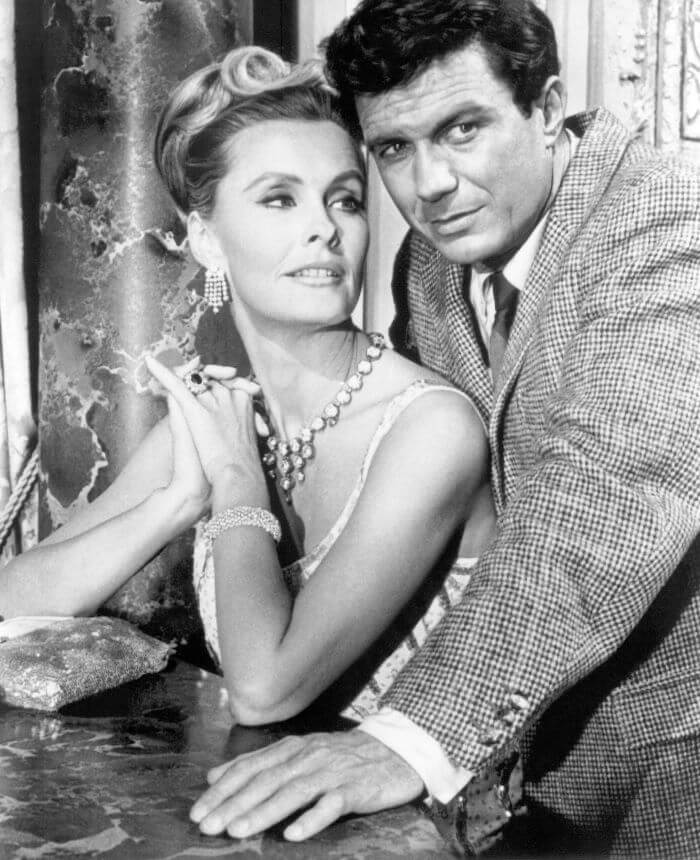 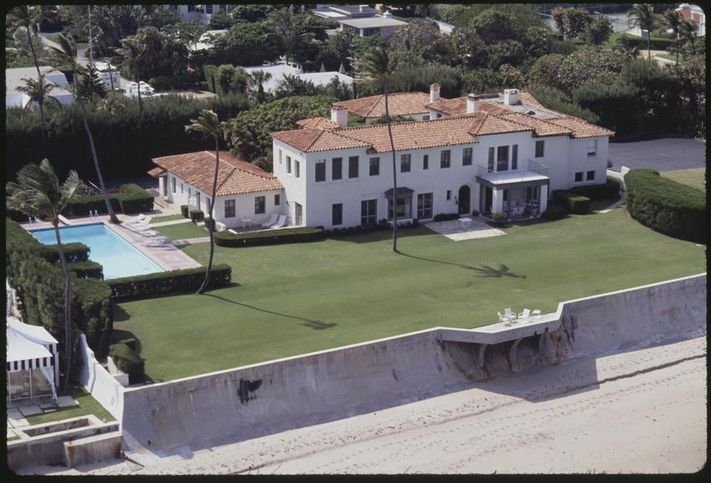 The patriarch of the famous political family, Joseph P. Kennedy, bought an oceanfront mansion on the ocean in Palm Beach in 1933.

Generations of the Kennedy family have vacationed there, and it was in essence the Winter White House during the presidency of John F. Kennedy. 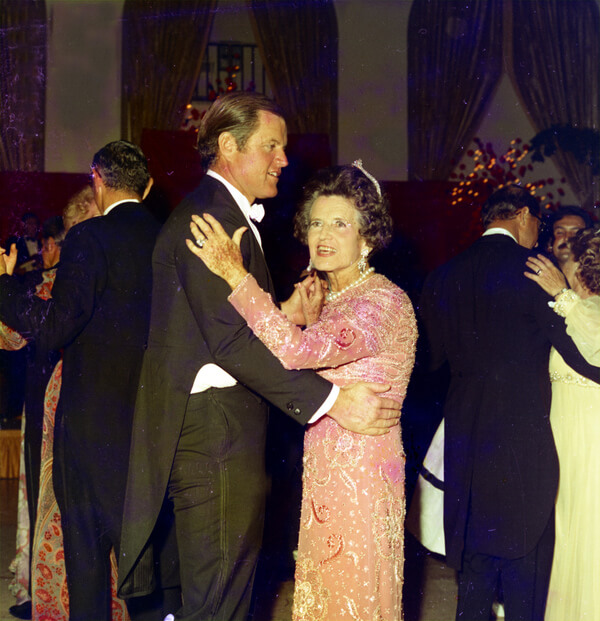