The Sopchoppy Worm Gruntin Festival takes place in a small town of the same name. 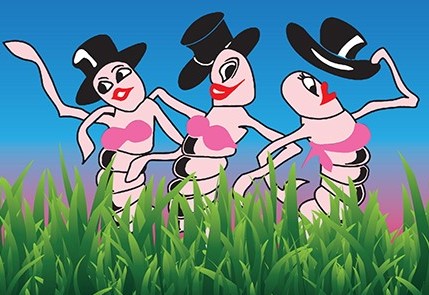 Sopchoppy  is on the eastern edge of the Apalachicola National Forest not too far south of Tallahassee.

It bills itself as the "Worm Gruntin Capital" of the world.

The only competition for the title might come from a couple of places in England and Canada.

The Annual Worm Gruntin Festival takes place on the second Saturday in April on the streets of historic downtown Sopchoppy.

Worm gruntin in Sopchoppy was once featured on CBS's Sunday Morning show back when Charles Kuralt was the host. 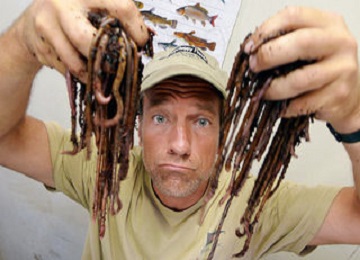 More recently, it was featured on the Discovery Channel's "Dirty Jobs" with Mike Rowe.

Worm grunting is a technique to make earthworms come to the ground surface so they can be collected and used for fish bait. When that activity gets boring, folks turn it into a competitive sport.

In Sopchoppy they call it "worm gruntin" and they've had an annual festival to showcase their skills since 2000.

Worm gruntin involves vibrating the soil. This makes the worms crawl up to the surface because they think the sound is made by moles digging in the soil to have a worm snack.

The Sopchoppy method of worm gruntin involves a "stob", which is a wooden stake driven into the ground, and a "rooping iron" which is used to rub the stob and create the vibration. Sometimes the iron is made from an old car leaf spring; sometimes a saw is used.

Gary Revell is a local professional worm harvester who puts on a demonstration at 900am on Saturday morning. As far as I know, no other Florida events have a worm gruntin demonstration.

It is important to start the gruntin before the day gets too warm and drives the worms deeper underground.

Check out this Facebook worm gruntin video to see how they get the worms to come out of the ground.

You and your kids can also participate in worm gruntin if you'd like to.

There are plenty of arts and crafts vendors and food booths to keep you busy during the day. There is also a ceremony to crown the annual Worm Gruntin King and Queen.

Live music will keep your toes tapping, and you can also enjoy watching or playing in a horsehoe tournament.  You will see some great players that really know how to toss a horseshoe.

The busy day ends with the annual Worm Grunter's Ball in the evening.  Sometimes it gets pretty crowded and you might want to consider bringing your own chair or blanket to sit on.

The dancing and music goes on until about 1000 pm; you will be well fed and happy by this time and know a whole lot more about worm gruntin than you did before you got there.