Melbourne, Florida Things To Do, Lodging, Dining, & Real Estate At End Of Article

Melbourne is a city of about 84,678 people in southern Brevard County on Florida's Space Coast about one hour east of Orlando.

It is on the Indian River Lagoon and its city limits extend eastward via the Melbourne Causeway and Eau Gallie Causeway to a section of the Atlantic Ocean barrier island. 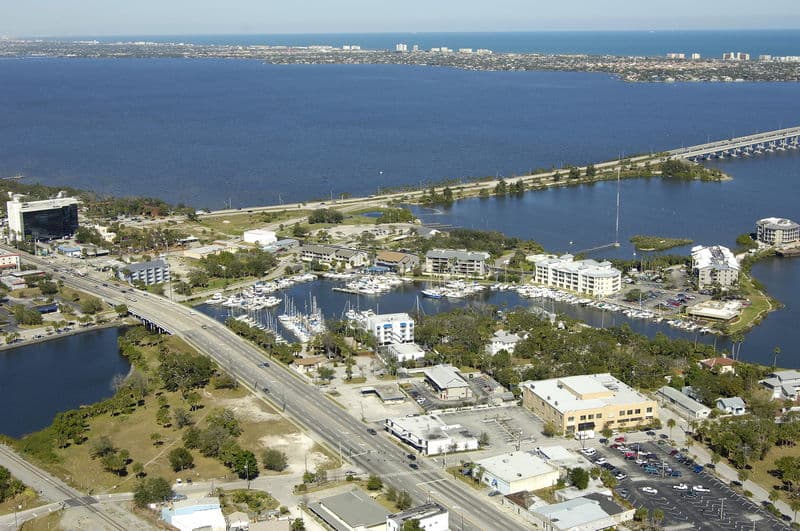 The Indian River Lagoon is part of the Intracoastal Waterway.  Sebastian Inlet is the nearest access point to the ocean from Melbourne.

The City of Melbourne gets its name from Melbourne, Australia. The area began to be called Melbourne eight years before the town was officially established.

A name was needed because a post office was being established to serve families in the area.

Melbourne Harbor View to Southwest in 1953

The first postmaster, Cornthwaite John Hector, was an Englishman who spent much of his life in Melbourne, Australia, before opening a general store at Crane Creek. 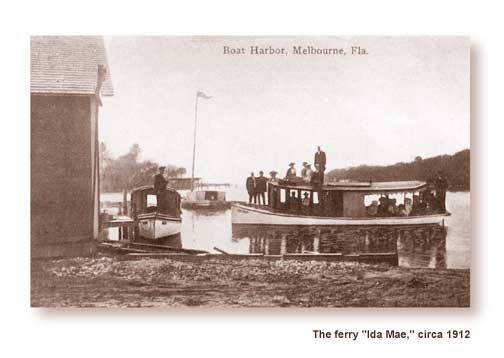 The area began to thrive in the late 1800's because of its advantageous location on the Indian River Lagoon.

Farmers in the area had easy access to a good port and economic transport of their produce to profitable markets.

An interesting local character was Peter Wright, a black freedman (a slave freed during the Civil War) who became known as the "Sailing Mailman".

Wright sailed a regular schedule from Titusville to Malabar to deliver mail to the numerous riverside settlements.

Melbourne prospered along Crane Creek where it empties into the Indian River.

Its fortunes were also linked to Eau Gallie, another small town north of Melbourne with a nice port on the Indian River. 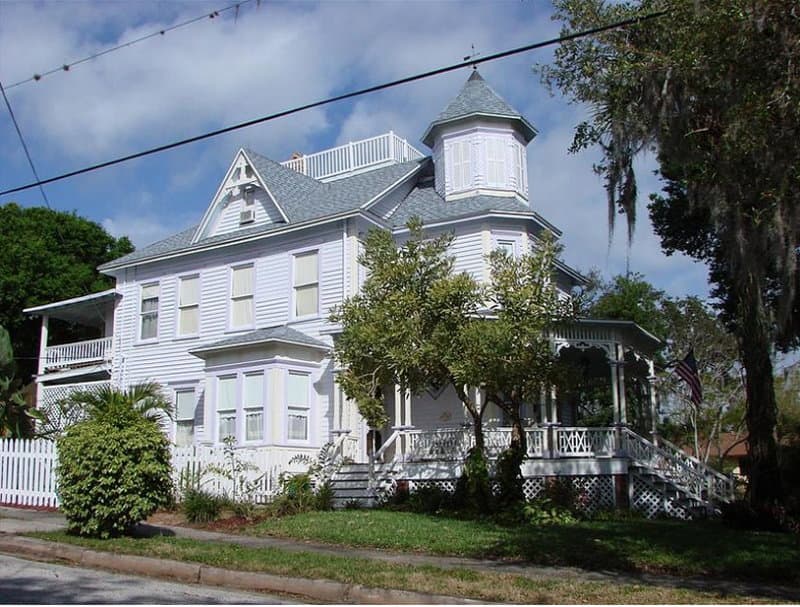 Eau Gallie was settled by William Gleason and his friends.

Gleason had earlier done a lot of development in the Miami area, and was prominent in state and national politics.

The railroad came to Eau Gallie and Melbourne in 1893, and the focus of commerce moved from the Indian River to the tracks on the higher land to the west. 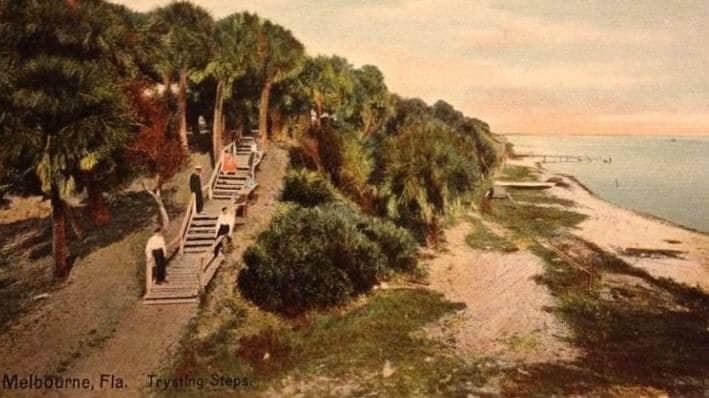 The edge of historic downtown Melbourne Florida near the Indian River was the location of the "Trysting Steps", a wooden stairway leading up a bluff at the north end of Front Street.

The stairs provided a convenient way to reach residences on the higher ground above and became an informal meeting place which was especially popular among young lovers at the time. 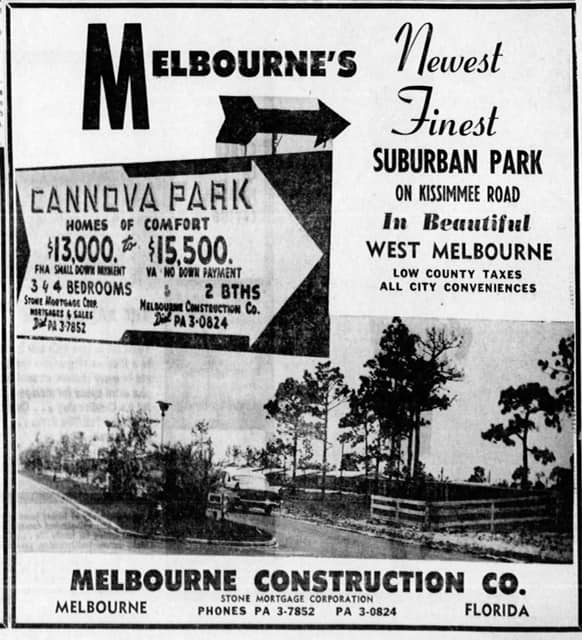 In 1969, local voters consolidated Melbourne and Eau Gallie into one city and picked the name Melbourne for the new venture.

Some wanted it to be named Eau Gallie; others wanted Melbogallie and any other variety of  compromise names.

Most folks are grateful that the name Melbourne won out - except for the remaining Eau Gallie natives.

The "new" Melbourne of today has two distinct "old" and renovated downtown areas:

Historic Downtown Melbourne and Olde Eau Gallie, each with a nice variety of restaurants and shops. 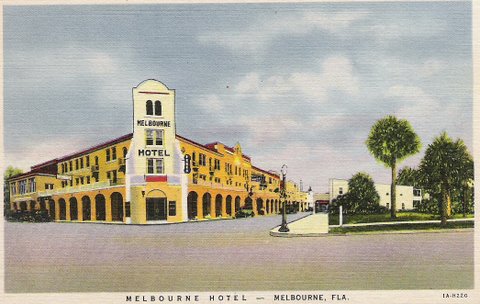 The old Melbourne Hotel shown on the postcard above still stands on US-1 in historic downtown Melbourne and is used today as an office building. 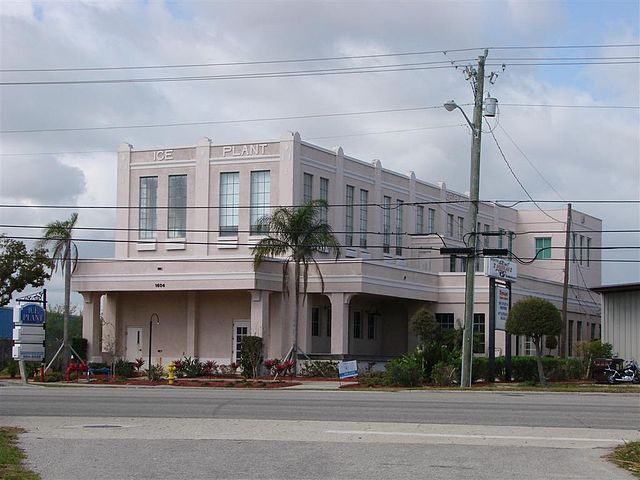 One of the interesting buildings still standing in Melbourne from the early days is the ice plant.  It was originally a power generating plant that also produced ice.

It is on US Highway 1 near downtown Melbourne, and is on the National Register of Historic Places.

The Melbourne city limits take in a large area of beach along the Atlantic Ocean and miles of shoreline on the Indian River Lagoon.

Further north on the barrier island are Cape Canaveral and Port Canaveral, and not far south on State Road A1A and US-1 are Sebastian and Vero Beach.

Melbourne's location on the Indian River Lagoon make it an ideal place for boating and fishing.

Melbourne Harbor Marina is on the Indian River in downtown Melbourne.

The large residential development communities of Suntree and Viera are in the north region of the Melbourne area.

Viera is home to Space Coast Stadium, known as USSSA Space Coast Complex.  It is a baseball stadium and 13 diamond multi-sports facility owned and operated by Brevard County.

The city has many defense and technology companies, along with a large number of high-tech employees.

Florida Institute of Technology is a private university in Melbourne with programs in science, aeronautics, business, engineering, humanities, psychology and communication.

It was founded in 1959 as Brevard Engineering College to respond to the need for advanced education of professional people working in the space program.

Many local professionals and businesses work at or provide services to John F. Kennedy Space Center and Patrick Air Force Base (now known grudgingly as Patrick Space Force Base. 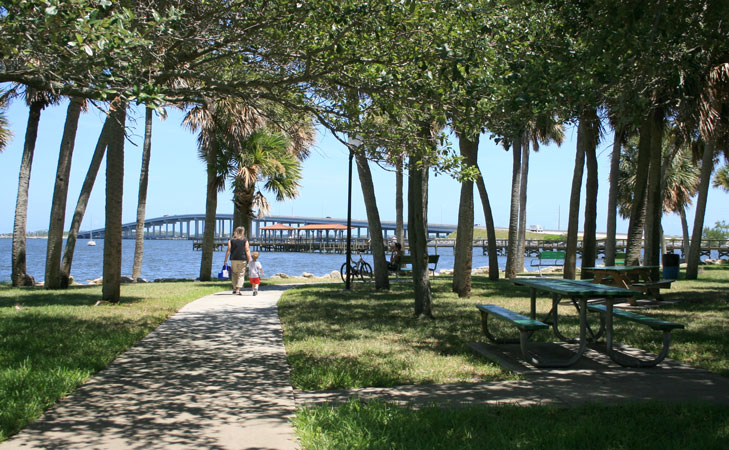 Melbourne is also a city with many parks.  Some are on the Indian River, others on Crane Creek and many others are distributed among the residential neighborhoods.

It is east to find public basketball courts and public tennis courts in Melbourne.

People love to watch the manatees in Crane Creek.

ALL ABOUT MELBOURNE FLORIDA

MELBOURNE THINGS TO DO